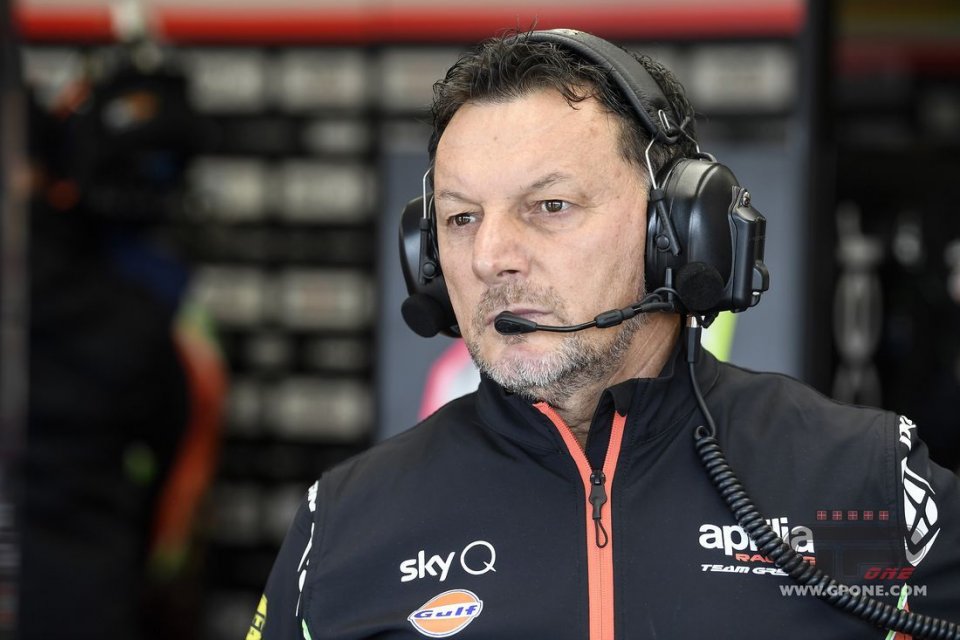 For Aprilia, 2020 is a very important year, one of a real revolution for the RS-GP, the new bike from the Noale manufacturer to challenge for the top in MotoGP. 2019, however, ended with a cold shower with the news of Andrea Iannone resulting positive to the doping test he had been subjected to during the GP in Sepang. Until sporting justice has finished its course, the Italian rider is out of the game and this means that in all probability he won’t be able to get on the new bike in the tests in Malaysia in early February.

In Noale they are trying to find a solution while giving their full support to Iannone. Fausto Gresini, team manager of the Aprilia team, is also standing alongside the Italian rider.

"I believe in Iannone's good faith"

"When I learned about the positive outcome of Andrea's test, I was amazed - he said - I had the chance to speak with him and I believe in his good faith, he did nothing wrong. In Sepang he immediately showed up at the checks and that's not the behaviour of someone who has something to hide. In that race riders lose a lot of fluids, and this may have had an influence, his values ​​are over the limit but not by much".

What is the time frame for a decision on Iannone?

“In theory, they have until March to take a decision, but hopefully they will do it sooner. Time is a problem for Aprilia because we’ve got a big programme scheduled and the new bike has to go on the track, we’ve made a big investment".

What will happen if Iannone can’t be in Sepang?

“Bradley Smith will take his place, but he will struggle to do all the testing days on his own, the three reserved for testers and the three for riders. Help is needed."

"It would be nice to see Biaggi on the Aprilia, but Savadori is the best option"

A lot of riders came forward and Albesiano also proposed the name of Biaggi.

"It would be really nice to see Max on the Aprilia, but it would be a very demanding task for him. His speed and his expertise are beyond dispute, but it’s one thing to ride on the track to have fun, as he is doing, another is to face such an important test on a new bike ".

Who could then come to help?

"In my opinion, the best option is Lorenzo Savadori. He is a young rider and wants to do well and get involved. He has experience in SBK and knows all the guys on the team, so putting him in would be easier for everyone”.

“I don't see any. I heard the name of Jorge Lorenzo going around and I said: if only! (laughs) but I really don't think it will happen. "

Should Iannone be disqualified for longer, what is plan B?

“It’s difficult to have one now and perhaps it is also pointless, because you only risk wasting energy for nothing as long as there is nothing certain. We don't know anything, he could be suspended for a month, two months, a year or maybe not even for a day, we must have answers before thinking about other options".

This problem couldn’t have come at a worse time ...

"I think 2020 will be the year of truth for Aprilia. Last year Massimo Rivola arrived, and it was positive, we see that the whole group believes in the project and important investments have been made. Clearly, there is no on/off switch, you can’t just turn on the light, it takes time to get certain results."

“Everyone expects a lot from the new bike. The five years we’ve raced in MotoGP have helped us gain experience, have allowed us to understand our level and what we were missing. The new bike has arrived at the right time and is the result of that experience. It will be very different in many aspects: in the firing order of the engine, in the V angle of the cylinders, it will have an external flywheel and it will be a narrower bike. With Rivola’s arrival, Romano Albesiano has been able to focus more on the project and, as I said, this will be a very important year ".

It’s a pity you will start it without Iannone.

“Not having him in this period makes things twice as difficult, because he is an expert rider, who has raced with other MotoGP bikes, and his indications would be very important. However, there will be Aleix Espargarò who will do a good job."

"The contract between the Gresini team and Aprilia will expire at the end of 2021, then we’ll see"

Aprilia is a unique case in MotoGP, because it relies on an external team, yours, to race. Is this a solution that works?

"Aprilia is responsible for the bike, I take care of the management, so we’re talking about logistics, mechanics, hospitality, we can call it the shell. This allows Aprilia to focus more on the MotoGP project, but we are in any case talking about a company that is in all respects officially present like any other company, nothing is missing."

Is this collaboration going to last long?

“The Gresini team's contract with Aprilia will expire at the end of 2021, because it is expected that in 2022, they will be in MotoGP with their own team. I could continue with them as a satellite team, as happens with other manufacturers, or I could take another path. We still have to sit down and talk about it."