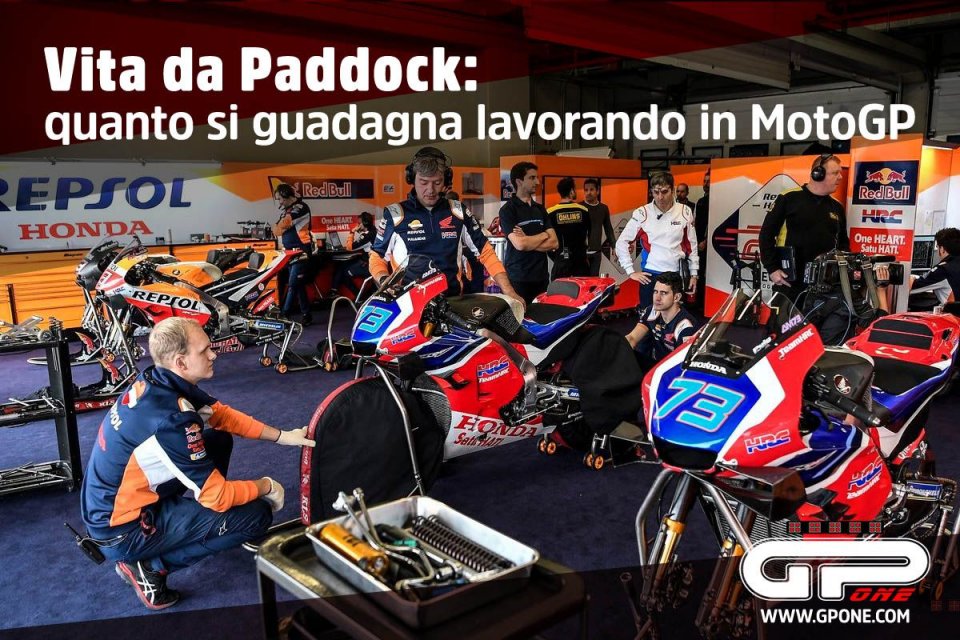 How much the top MotoGP riders earn has always been a major talking-point for the media and the general public. Champions such as Marc Marquez, Jorge Lorenzo and Valentino Rossi can earn millions but coupled with this, there is always a lot of talk about the retainers of the other competitors who make up the grid, with gossip of all kinds about paying riders, recommended riders and so on.

But if we leave aside the world of those who actually race the bikes on track, how much do the men who put the bikes together and strip them down in the garages, or the men who read the data from the electronic control units and who maybe help to find the perfect set-up earn? Or what about the guys who assemble and disassemble the hospitality units, which for a few days almost every weekend become a second home for riders, technicians, press officers and the whole world that revolves around a team, in every category?

We’ve managed to put together some information, at the same time discovering a world of difference between MotoGP, Moto2 and Moto3 also regarding this particular aspect. However, one constant that accompanies the vast majority of the 'workforce' involved at the track in the various categories is that they are almost always freelancers, who issue invoices for the services offered and who have to renegotiate their future from year to year. In short, racing is not a world in which one enters and then takes a seat in the warm and welcoming world of the workplace indefinitely. Every day is a challenge for those who work in the paddock, where they are called upon to give their best to earn confirmation for the following season. Basically, it is not a suitable working environment for those who do not have a strong competitive spirit.

The crew chief or chief technician is obviously one of the key figures for managing operations inside the pit garages. Often the crew chief of a winning rider is subjected to a media exposure similar to that reserved for the rider he works with. The top names, those who usually earn good money, are obviously associated with the great champions of the sport. Santi Hernandez probably has an excellent retainer, also because everyone knows how much Marquez treats those who work with him well from an economic point of view.

Then there are the men of experience, who make the difference thanks to the massive amount of technical knowledge they have accumulated over the years and who obviously are gifted with often infinite know-how, men such as Ramon Forcada or probably Jeremy Burgess. Moto2 crew chiefs with a glorious past, who may have had considerable experience in both MotoGP and SBK, also earn good money.

In short, the crew chief is a figure that more than anyone else present in the box helps to move the market. Experienced professionals get paid well, and often teams who want to invest to establish themselves in categories such as Moto2 or Moto3 are willing to take on top figures for this role to be sure of being competitive on the track.

The bikes on the track constantly collect endless streams of data. In acceleration, in braking, in cornering. And all this data must then be read, analysed, ‘translated’ by the data analysts (here our interview with Flamigni and Marelli), who basically have the job of making it comprehensible by comparing it with the sensations of the riders. Often the data analyst also understands the areas where the rider is not performing to his maximum capacity, and he suggests where there is room for improvement perhaps by cross-referencing the data with that of his teammate.

In short, we are talking about a very important figure inside the garage, someone who can make a difference especially when making changes on the bike or when a rider tries to change his style. Even in this area, experience makes a lot of difference in establishing the market price. A telemetrist or data analyst who has decades of experience in MotoGP obviously has a different cost than those who are in their first season in the world championship, after having maybe only worked in a team that races in national championships like CEV.

Nevertheless, the market for data analysts is a lot less hectic than that of the crew chiefs, but we have been able to learn one thing for certain and it is the difference in cost between a Spanish professional and his Italian counterpart. The cost of a Spanish professional figure is on average lower than his Italian colleague. Probably this is also affected by the higher taxation to which an Italian freelancer is subjected compared to a Spanish one.

A team mechanic is the person who literally puts the bike on the track. Any mistake in disassembling or reassembling some parts on the bike can have a very high price, so there must be total trust between the rider and his crew. A rider like Rossi has more or less had the same men working alongside him in the garage since 2000, the year of his debut in 500cc.

It is above all the MotoGP riders who have the luxury of asking to be surrounded by people they know well and trust, often making the switch from one team to another the circumstance in which even that rider’s mechanics change team. The situation is different for Moto2 and Moto3. In most teams the mechanics remain in the same colours for very few seasons, except in some cases that we can define as 'high fidelity'. These are usually the guys who form part of the team structure more than any other professional and who often from an economic point of view are not treated in the same way as colleagues who don’t get their hands as dirty, but who work more with computers.

Suspension technicians can also be included in the category of mechanics. In some cases, he is an internal figure in the team, while many teams turn to the assistance services present in the paddock of Öhlins, Showa or WP. Often a suspension technician of a team is paid slightly more than a traditional mechanic, covering a salary that ranges from 40,000 to 60,000 euros.

And the press officers? Many are happy with 30,000 euros

There are obviously many professional figures who make up the paddock and drawing up a list of earnings for each of these is not an easy job. But we can undoubtedly say that from press officers to hospitality managers, earnings are often less than 30,000 per year gross. Add taxes, add social security costs and above all add all the time these guys spend away from home to understand that in reality paddock life is much harder than you can imagine.

Often from the comfort of our home we are deceived by the idea of ​​living a life on the road, taking numerous flights and sleeping in luxury hotels. The reality is much different from what everyone dreams about, especially for young professionals looking to gain a foothold in the paddock.

The hotels are often not even distant relatives of the luxurious resorts where MotoGP riders sleep and the flights are often in economy class, with long waits at airports scattered around the globe. There are no days off to visit those places, so the reality is that often the trip for the race weekend turns into a constant airport-hotel-track-hotel-airport tour. Basically, it’s no party, especially when the paddock moves to places that are not exactly exciting from a tourist point of view.

It is certainly a life full of adventures, made for those who are willing to sacrifice a lot while waiting to collect a prize, perhaps in the form of a contract for a factory team in MotoGP, which may never even come. Are you still convinced that paddock life is so much fun for everyone who works there?