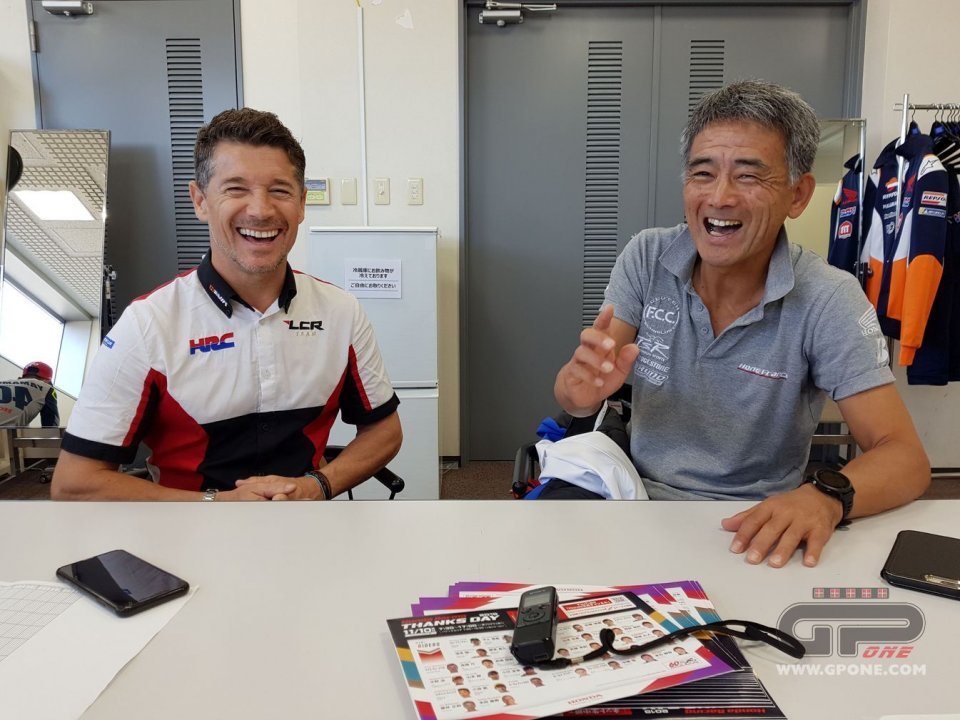 Lucio Cecchinello and Masa Fujii have the same job – running top-level teams in world-class motorcycle racing – but in two contrasting divisions of the sport: MotoGP and the Endurance World Championship.

The Italian and the Japanese have enjoyed great success in their respective categories, with three MotoGP victories and three Suzuka 8 Hours wins between them.

And they’ve been friends for almost 25 years. They first got to know each other when they contested the 125cc World Championship with Honda machinery in the 1990s, when Cecchinello was a Grand Prix rookie and Fujii ran a team, with rider Nobby Ueda.

The pair got together at last month’s Honda Racing Thanks Day at Twin Ring Motegi to discuss their love of motorcycle racing and the very different jobs they do.

"Endurance is more like human life – the start, then a long time and then the finish!"

“I love motorcycles and also I like to win! - says Fujii - I love both categories – MotoGP and EWC – but there’s a big difference. Sprint races – Grand Prix races – are very special, and I have very good memories of racing in the 125, 250 and 500 classes with many riders. Endurance is more like human life – the start, then a long time and then the finish! The feeling is more like a family, with two or three riders on the same team who are together, helping each other all the time.”

“Also, in MotoGP we have 20 races a year, so if something goes wrong in a race, we only have to wait two weeks to try again. But in the big endurance races like the Suzuka 8 Hours or the Bol d’Or 24 Hours, if something goes wrong you have to wait a whole year to try again! So the amount of stress for the team manager in making sure every single thing is perfectly accomplished must be very, very high.”

Cecchinello’s entire team numbers 47 staff, with 27 working in the garage or on the track – riders, technicians, engineers and mechanics – and the rest working in team hospitality or at team HQ in Monaco, from administrative staff to graphic designers. Fujii’s team line-up is of a similar number at 24 hour races, but fewer at the shorter eight-hour events.

"We design our bikes into three parts – the front, the centre and the rear"

“In endurance the riders account for maybe 40 percent of the performance and the team for another 40 percent, so how the team works together is so important - adds Fujii - We design our bikes into three parts – the front, the centre and the rear. If a rider crashes and destroys the rear end of the bike our target is to change the whole rear end in three minutes. If the front end is badly damaged our target is to change the whole front end in four to five minutes.

"We cannot change the suspension set-up or re-map the software. We have to set everything at average"

“Also, we have to manage many different conditions. For example track temperature may change from 40 degrees in the daytime to five degrees at night, but we cannot change the suspension set-up or re-map the software. We have to set everything at average. For me the most interesting point is managing the riders. When I choose my riders I make sure they are the same weight and height, with the same length arms and legs. If the riders are different shapes and sizes then it becomes impossible!”

Cecchinello has never tried endurance racing, but admits he is fascinated by its different demands.

“There are many different aspects, like the importance of training the team crew on safety issues, because they have to deal with refuelling and changing brake pads so fast. Also, in MotoGP we look for pure high performance from the bike and we tune the bike according to the information we get from the rider. In endurance  they have to deal with two or three different riders, so they have to combine the information from all the riders and then they must decide which set-up is most suitable for all of them. It’s very, very interesting.”

Both Cecchinello and Fujii had their machines on display at the Honda Racing Thanks Day. Cal Crutchlow wowed the crowd aboard his RC213V, while Mike Di Meglio rode some laps on Fujii’s CBR1000RR Fireblade.

“It’s a privilege to come to this event and it’s great to see so many fans here - said Cecchinello - This is our chance to say a big thank you to the fans for all their support during 2019 and I look forward to coming back for the 2020 Japanese GP next October.”

published thanks to the permission of Honda Italy