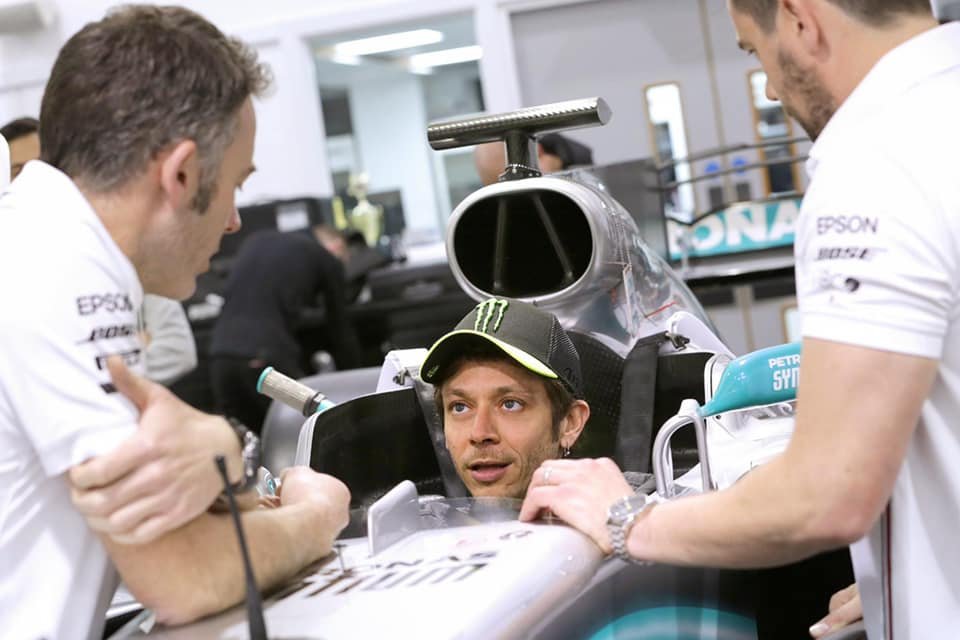 The day they'll be swapping their respective vehicles is near and preparations are underway for next Monday, December 9th, when Rossi will drive Hamilton's Mercedes F1 in Valencia, and Lewis will ride Valentino's Yamaha M1 MotoGP. A really  special day for the two champions.

The Doctor flew to Brackley in Great Britain today, where the Mercedes team is based, and was able to sit in the single-seater that he'll be driving in a few days in Spain. "I think Lewis Hamilton and I will have fun soon," he wrote on his social media profiles. He's certainly not mistaken.

Valentino knows what awaits him, having already tried a Ferrari F1 several times in the past. He has to visit the Mercedes headquarters to take the measurements needed to create an ad hoc seat, so the Doctor might need to spend some time on the highly sophisticated Mercedes simulator. A good workout before facing the track. Also because modern single-seaters are a real powerhouse of electronics and, to figure out what all the buttons on the steering wheel are used for, you almost need a degree in engineering.

Lewis won't be that lucky because they don't have such fancy simulators in motorcycling. But he's still preparing for the MotoGP, far from prying eyes. The clues lead to Jerez, where Hamilton could already be riding a Yamaha SBK of a team that's participating in the BSB, the British SBK Championship.

For the F1 world champion, it'll be important to brush up a bit before getting on a beast of a bike that far exceeds 250 horsepower, and on a track that will probably not be in optimal conditions given the season.

It really doesn't matter, though. Valentino and Lewis are happy only when their adrenaline goes hand in hand with speed, and they'll have both on Monday in Valencia.