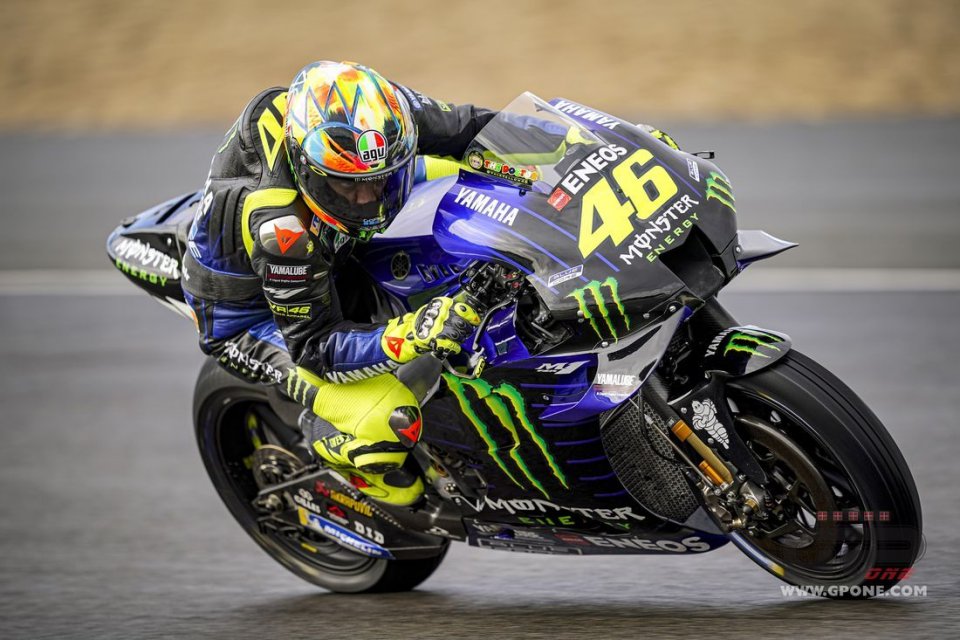 The rain ruined Valentino Rossi's plans, which he wanted to take advantage of until the last minute of the last test day of the year in Jerez. But the track didn't let him test that long, despite the fact that the Doctor was one of the riders with the most laps, 33.

"Too bad. We were planning some important comparisons," he said. "Unfortunately, I was able to do only ten laps on dry asphalt and some on the wet."

"I had better sensations. I wasn't happy yesterday. I had worked on the set-up without being fast, while I managed to go faster today after only three laps. I felt competitive."

"Not bad. These tests were important to me for two reasons. The first was the arrival of David Munoz as chief technician and the second was testing the new bike."

Let's start with the first: Has Munoz's arrival improved your spirits in the garage?

"Our spirits aren't the problem, the results are. When these are good, then everything is fine. Otherwise, everything becomes more difficult. All we have to do is win, and everything will work out," he said, laughing. "But the guys in the garage are happy about David's arrival. He's young and has a different way of working. Now all we need is time to understand each other better and to get to know the bike."

What changes with a new chief technician from a new generation?

"Lots of things. He has more preparation behind him and is able to use new technologies and new tools well. It's a great experience for me. I'm happy."

"The results are pretty positive. We've improved in some respects, but we still have some problems. There's still a lot of work to do."

Are you referring to the engine?

"We're on the right track, but there's still a big difference with the best. If we get 10 Km/h at Jerez, the gap on longer straights will be a problem. I felt some improvement with the new engine, but I need more, and I hope there will be improvements in Sepang."

Vinales proved to be very fast.

"Maverick is always fantastic in tests. He gives something more than all the other riders. But it's not the first time that we're fast in the tests, then we suffer in the race with the tires, but we have to remain focused. The fact that Vinales is fast, like the other Yamahas, makes me happy because it means that it's a good bike , but we have to keep working."

Were you able to get an idea of the numbers in the field?

"I saw the Ducati do very well. Dovizioso was calm, but he was fast, and even the Suzukis seemed to be in good shape. There are practically a dozen riders who can win next year.”

"I'll have a lot to do. We're having the 100 km of Champions at the Ranch this weekend, so I'll be back on the track on Saturday. Then I'll be in Valencia on Decemeber 9th to test the Mercedes Formula 1. I'm really excited. And, finally, the 8 Hours in Abu Dhabi. Then I'll see. As always, I'll try to rest and unwind and find lots of incentives for next year."

Among the other teams, Webike SRC Kawasaki France Trickstar (EWC champions) and Moto Ain (Superstock champions) will use the French tyres
1 day 16 hours ago

He tells of the horrendous crash in which he nearly lost his life and recounts tales of gangsters, glamour models and glory in one of the most...
2 days 56 min ago

VIDEO - The two brothers will wear special graphics to show their solidarity at this time. Helmets, gloves and boots will then be auctioned off for...
2 days 22 hours ago

The Dutchman: "In the afternoon I had some problems with front end confidence"; Razgatlioglu: "Too many things to try confused me; my head is...
3 days 9 hours ago