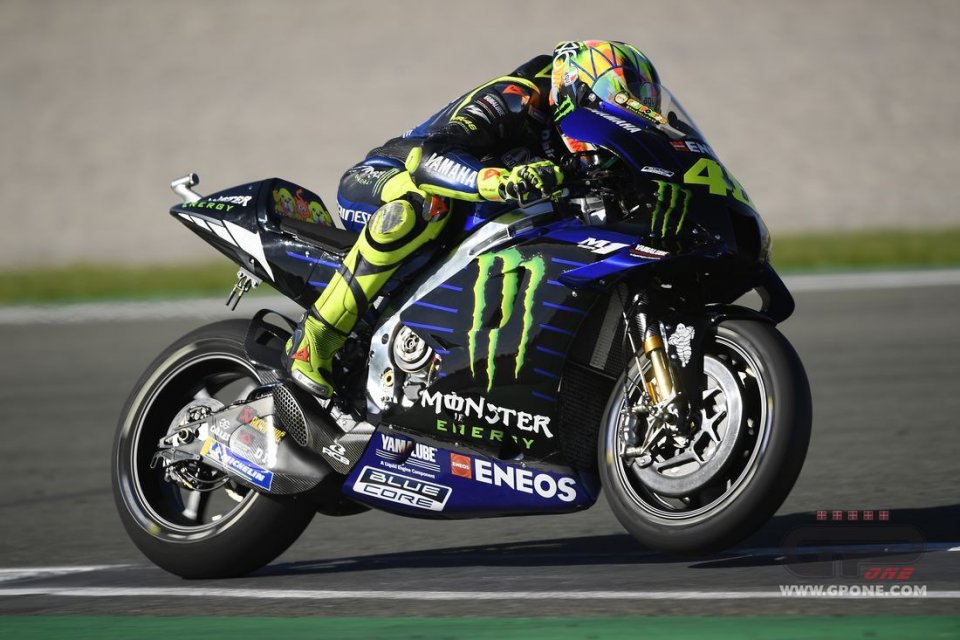 It didn't all run smoothly for Valentino today, the Italian having to do without the 2020 prototype. His bike “was struck dumb as we say” (jokes the Doctor) at the side of the track and he could only get back on it come the end of the session. So he was unable to continue to use the new engine, and focused instead on the setting.

Valentino, firstly, what was the problem with the 2020 M1?

“A one euro part broke, this is what we always say, it's the official explanation (he laughs). Joking aside, it was a wire”.

This forced you to change your testing plans?

“Little changed in the end. The two important things were to test the new M1 and work on the setting, something we could also do with the standard bike. We also needed to make a comparison having used the new Yamaha yesterday”.

You're 9th at the end of the day, does that mean it didn't go too well?

“On the contrary, I didn't ride well on the flying lap, but was able to maintain good pace, also with used tyres. This year, we were never able to find the right setting for me, I've continued to struggle. Yesterday, we took a small step forward and things went better again today. I'm pleased with the work done”.

Is this also thanks to your new crew chief David Munoz?

“I've got on well with him, but I expected that as I already knew his character. Now we all need time to find the right synergy, and he needs time to understand the bike. We need to work logically, the aim is always to be quicker than this year and we'll do all we can to achieve that”.

The aim was to be quicker along the straight, Vinales said you're not yet there.

“The aim was not to be faster, but rather less slow (he laughs). We've improved, but the road is long. We need to continue in this direction”.

This is the third evolution of the engine, how many more are needed?

“I reckon 7! (he laughs) I don't know but Yamaha is working hard and I hope for another step forward”.

“It's a little different to what we have now, we're looking for better traction. I only tested it yesterday, it doesn't seem bad but then the tyres will change next year. I find the new Michelin better, more consistent”.

So, for a final verdict, we'll need to await the Jerez tests?

“Those tests will be important because the track is similar to other circuits and so it will be useful to get a clearer idea there. I'll use an old bike and a new one there too, to continue to make comparisons”.

Then it's back to Valencia on 9 December, to drive Hamilton's Mercedes F1.

“It's going to be great, but we'll need to be lucky with the weather. I can't wait, a Formula 1 is one of the most interesting vehicles to drive. And Lewis will be there too, it's going to be cool”.

Chrissy Rouse sustained a significant head injury. He was stabilised and put in a medically induced coma at the medical centre by the BSB medical...
3 hours 32 min ago

This is the first time there have been two or more rookies on pole position in a single premier class season since 2006 with Dani Pedrosa, Chris...
1 day 2 hours ago

The video circulating on the web reveals a disconcerting episode in the Moto3 paddock. Tom: “I kept quiet because I wanted to keep my ride. That’s...
2 days 2 hours ago

“I was leaning too much. It happens when you push on a MotoGP. I have injuries all over my body. I’ll have to wait and understand my condition. It’s...
2 days 20 hours ago