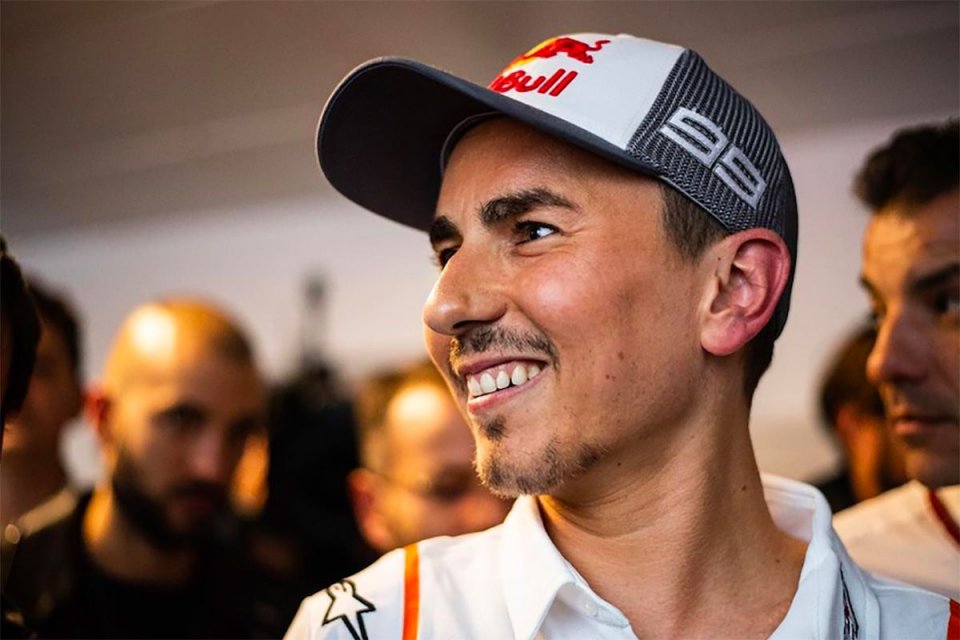 The fourth most important day of a rider's career. That's how Jorge Lorenzo defined the day of his retirement during the press conference on Thursday and, today, that day came to an end, leaving a trail of emotion in the hearts of his fans. Jorge ended his extraordinary career in the MotoGP with a race that wasn't that exciting, but full of meaning for a thousand different reasons.

A lap of honor accompanied by the standing ovation of all his fans that were present in Valencia. That last flag in the sand to mark a "Lorenzo's Land" that is not a physical place, but a place of the soul, and a place of absolute importance in motorcycling history. Something that can only be described as exciting on the fourth most important day of Lorenzo's career, and the rider himself confirmed that he would never have expected so much affection from his fans and co-workers.

Jorge left open a small crack open in the door he could still get his foot into when he said that his retirement would be a final decision at 99%. A number that has a special meaning for the Spanish rider. A 99% that overshadows but does not completely erase that 1% in which so many hope, namely, seeing him on a bike again. Whether you like it or not, when a champion of Jorge's caliber stops, the world of sports loses something important.

"One of the things I learned in life is to never say never. At the moment, it's a final decision," Lorenzo declared. "But I can't know what I'll be thinking and feeling in a few months. I'm open to all possibilities, and we'll see what happens. I've enjoyed 17 years of competitions with so many victories and different titles. All that remains is to wait and understand what the next chapter of my life will have in store for me."

"I didn't think I'd feel like this on the day of my retirement. I'm happy."

Without thinking about tomorrow, tell us about your feelings today.

"I'm really happy, I feel good. I feel a sense of freedom, and I didn't think I would feel this way on the day of my retirement which, like I said, is the fourth most important in a rider's career. Something comparable to when you fight for a championship or for a win. It's a beautiful feeling. I'm leaving this sport healthy, still young, and with so many possibilities to enjoy life in so many ways."

Freedom that will allow you to do many things that, up until now, you may have had to avoid.

"Those who don't know me personally, only know me half way."

"When you race, you don't have that much time to have fun because you have lots of limits, lots of obligations and commitments to respect. These four days in Valencia, I was literally overwhelmed by the affection of so many people. Something I didn't expect. The whole Paddock made me feel it. Some spoke to me in person, and I received many messages. I never would have imagined experiencing such an exciting weekend. This is worth more than anything else for me. I know that those who don't know me in person have an idea of me that is only 90% of the true Jorge Lorenzo. Only those who know me really well know how I really am. Feeling so much affection moved me."

"At the start, I felt a lot of pressure. I didn't want trouble."

Was it difficult for you to concentrate on the race today, with everything going on around you?

"I thought a lot about how I would feel riding during the last race of my career. I thought I would feel relaxed, without pressure. Actually, that's not what happened because I felt a lot of pressure at the start. I didn't want trouble. In the early laps, I knew it would be difficult because we also saw in the other categories that there wasn't much grip because of the cold, and it would have been easy to make a mistake or even fall. I definitely didn't want to fall, especially in the first laps of the race. When the first three or four laps passed, I calmed down, I was calmer."

"I wanted to finish the race standing so I could to celebrate this unforgettable."

Did you enjoy riding later?

"I was only thinking about finishing the race. The front tire was a bit at the limit as far as grip is concerned. I couldn't lose my concentration because I knew that if I slowed down, the front would lose temperature, and it would be easy to fall. When I saw that Tito had passed me, I only thought about keeping my pace and remain standing. I wanted to stay within my limit, but not exceed it because I wanted to finish the race standing and be able to celebrate this unforgettable day with my fan club, with all the fans. They made me proud today, and I'm also grateful to the team. I wanted to get points to help win the title."

In any case, you were a Dream Team for Honda. You won everything.

"Honda won everything this season. You can define it the perfect season. Of course, Marc did much more than me. I did the best I could. I have no regrets, whatsoever. Given the circumstances in which everything took place, I only feel happy now. I spent 17 years here in this league. I won a lot and everything leaves me with a sense of happiness."

"A perfect year for Honda, We won everything. I did my best. Marc did more."

You experienced a very strange weekend as a rider, right?

"This was obviously a different weekend. I did so many interviews, many more than usual. I wanted to be more concentrated the other times. I wanted to give it my all on the bike, but I did many things here before getting on track. But, actually, once I pulled down my visor, I immediately found the concentration I needed to give it my all. I didn't do much today, but at least I got some points and, above all, I finished the race on by bike and not in another way."

"If I were to go back, I'd always still want to be Jorge Lorenzo."

If you could go back to when you were 12, what would you choose to do with your life?

"I'd choose to be Jorge Lorenzo. Exactly the same person I've been up till now. I wouldn't change a thing. I had the opportunity to ride fantastic bikes. I raced lots of races, and I won many. I became world champion, five times. I've had lots of satisfaction in my sport. What more could I have wanted?"

My future is a one-way ticket to Bali.

What are your plans for the week?

"I've already got tickets to go to Bali in Indonesia! People are kind there, and I can't wait to escape this cold. I'm going to relax. I feel like I have to move away from the pressure and stress I have been dealing with for years. I'm going to enjoy the sun along with some friends who'll be joining me. I don't know how long I'll stay. Honestly, if I have fun, I think I could stay several weeks. Then, when I come back, it'll be interesting to evaluate everything, to look at the situation more calmly."