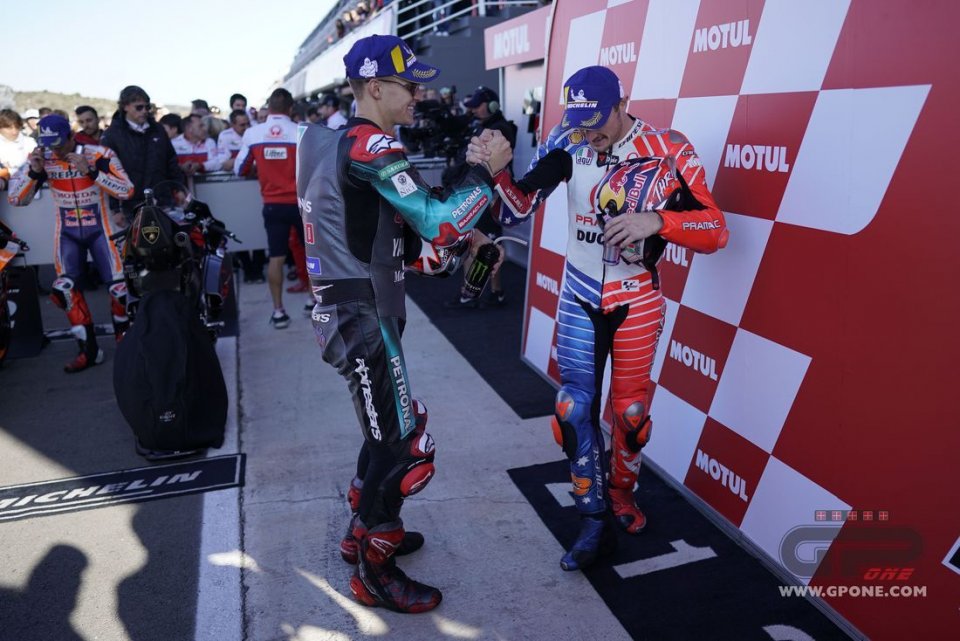 Who will ruin Marquez's home party in Valencia? The world champion really wants to round off the year at home, but there are two young riders who have a crazy idea in their heads and will be starting alongside him tomorrow. Fabio Quartararo and Jack Miller are ready to battle with him to prove that the future of the MotoGP is already his present.

The 6 pole positions in his debut season in the MotoGP speak for the Petronas rider and also the fact that he has already crossed swords with Marc. He hasn't yet succeed in his final lunge, but Fabio gets better every time he gets on the bike, and Marquez has also had to acknowledge his unquestionable ability in the flying lap.

"I finished the day in first place even yesterday, but I didn't have a good pace," he confessed. "I instead managed to be more constant today and better in the last sector of the track, where I struggled. I feel fast even if not yet at Marquez's and Vinales' levels.”

But they still have the warm up to fix the last few things and then the race to drive away the ghosts from Sepang.

"I had a disastrous start, and then the pressure on the front tire had risen," he remembered. "Fortunately, certain problems don't exist here. I worked well these days, and my strategy is always the same. It's essential to push right away with the Yamaha. I'll do it for the first five laps, then see what the situation is. I want a good result in the race. It's important to be fast in qualifying, but I don't want to always be the Saturday man."

Jack Miller also has resolute intentions. Pramac's Australian rider has been the best interpreter of the flying lap recently, and he is fearless when it comes to jumping into the fray. And the Desmosedici is the best bike to burn his opponents with at the start.

"I really think I'll get ahead of everyone at the first corner, " he said, smiling. "The important thing, however, will be to choose the right tires and remain constant, contrary to what happened in Malaysia."

Jack is proving he knows how to best interpret the Ducati.

"Having an official bike helps, and I'm getting more experience," he explained his progress. "It's been a good weekend so far, and I've improved my pace in the FP3 and FP4. I'll be honest. I didn't expect to be so close to Fabio and Marc."

Miller was also a direct witness of two falls: Marquez' and Bagnaia's.

"Pecco's was really strange," he commented. "I think he had some problems with the brakes. Marc, on the other hand, did nothing strange, but Valencia is a very demanding track for the front tire."