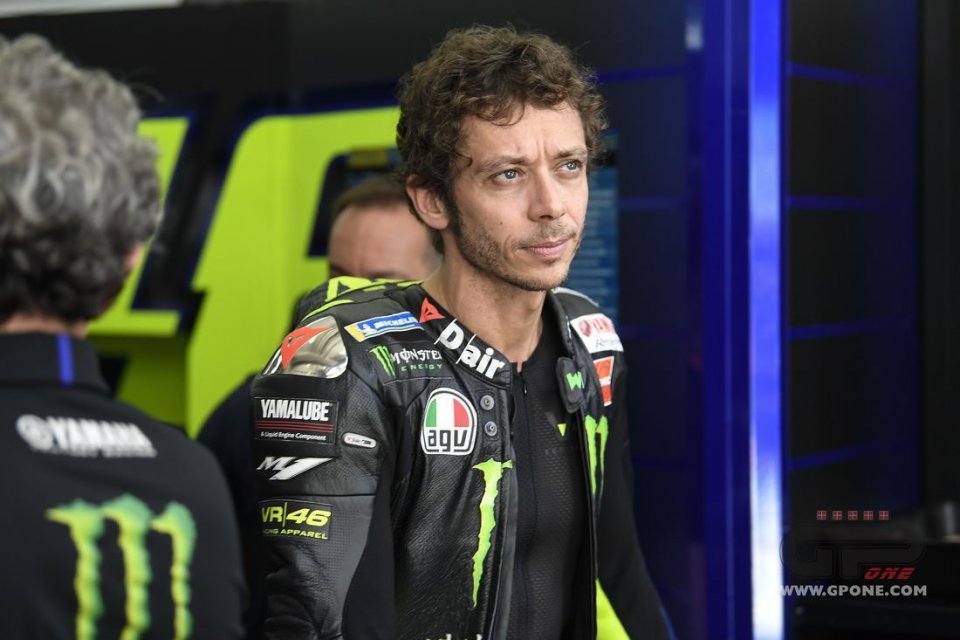 "This day has been quite complicated," Valentino said jokingly when commenting on his two falls in Valencia. But he does it with a smile on his lips, without thinking too much about the beatings he took and already thinking about tomorrow and qualifications. The day after Lorenzo's announcement on his retirement, Rossi still has the same desire to race, despite being 40 and after an unsatisfying year.

"Of course, 10 years ago, I never would have imagined I'd quit after Jorge and Pedrosa," the Doctor reflected. "Like I said yesterday, every rider sets his own watch. This is a difficult, demanding, and even dangerous life. You can continue only if you have fun. There is no right or wrong choice, everyone does what they feel."

Lorenzo felt the need for a different life, "with fewer compromises", as he defined it. For Valentino, a real life is one with a helmet on his head at 300 km/hr.

"Once I retire, I'll have various things to do," the Doctor continued. "Like a family, have children, but nothing will be as fun as the MotoGP, and I had already realized that 10 years ago. I'd like to race cars, but it'll still be something different, so I'll continue to ride a bike until I can."

At the risk of running into a bad day like today.

"I don't remember how long it's been since I've fallen twice in the same day," he smiled. "In Valencia, there's always a risk of falling. You have to be careful and, today, I wasn't careful enough. It was a pity because I was fast, and I made a stupid mistake this morning. I had the soft tire in the front and pushed too hard on the first lap. You can clearly see from the data, the tire was still cold."

For his encore in the afternoon, however, the dynamics weren't as clear.

"I didn't expect it," Rossi explained. "I had a medium tire, but I was already on lap 6 or 7, so it was up to temperature. The telemetry said that I didn't do anything different, but we're all at the limit with these temperatures."

According to Valentino, it's not a tire problem.

"With this cold, the bikes should stay in the garage," he said, ironically. "The problem is that we're in mid-November. It's winter, and we should be racing at Sepang, not in Valencia."

Despite the hitches, the Doctor is still optimistic, even if he only reached a 14th time at the end of the first day of free practice.

"I certainly have a lot of room for improvement," he assured. "The second fall was hard. I was lucky nothing happened, and I needed a few laps to get back on track. I didn't try to do a flying lap. This morning, I was around a 5th position. We should go back to those levels."

The plan is clear.

"Decide on the tires for the race and then place in the top 10 for direct entry into the Q2. Everything will depend on the FP3,” he warned.