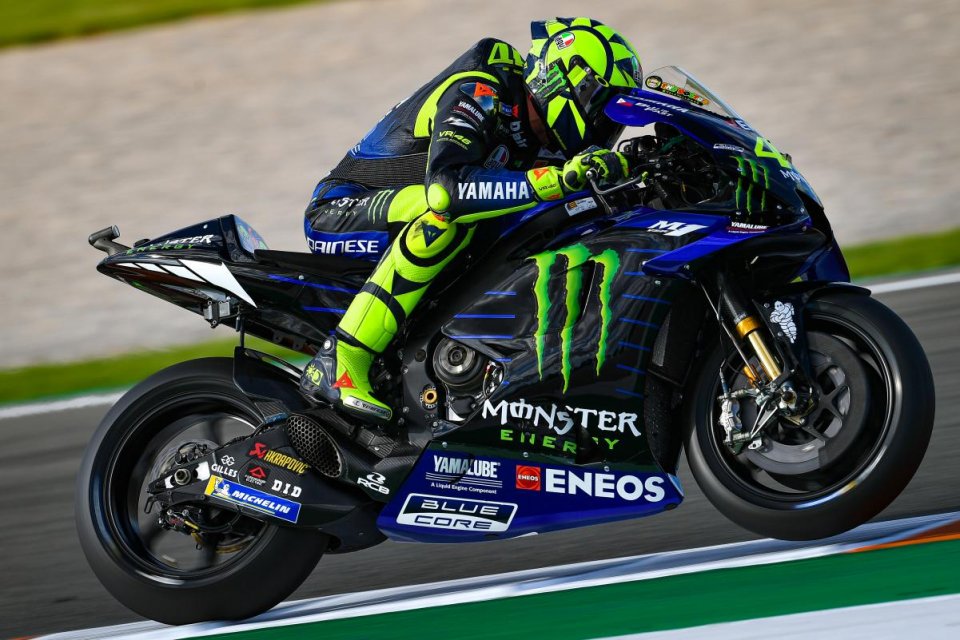 After qualifying, Valentino Rossi began his chat speaking about the gossip in Valencia: the possible arrival of Marc Marquez's brother, Alex, in the Repsol-Honda team.

"I would have expected Zarco instead of Alex as Marc's teammate, so I'm curious. Alex is the Moto2 champion, so why not. If he were to go to HRC, he wouldn't be stealing anything from anyone."

Then we went on to talk about the last Grand Prix of the season where Valentino, after an excellent FP3 closed in the top positions of the classification, qualified only in a 12th. The explanation of this result is simple, and (again) concerns strategy.

"The FP3 went well despite the cold this morning. I finished fourth and reached my Q2 goal. In FP4, I worked on the tires for the race," he explained, "while we made a mistake in strategy in qualifying, since I ended up on the track with the second tire at the wrong time. There was lots of traffic, and I couldn't improve."

All that remains is to mull over what happened, acknowledging the mistakes made.

"Strategy sometimes works, and other times it doesn't. I was also unlucky today, since I found Pol Espargarò on the track with used tires but, in any case, it seems that we're not great in developing strategies," he said laughing. Too bad, because without mistakes like this, I could have been one or two rows ahead, and it would have been another race."

However, they still have to race and, with a bit of irony, we can say that Valentino is an expert on comebacks in Valencia since, in 2015, he finished fourth by starting from the last box.

"Our potential was better, but starting 12th will be difficult, both because it's not easy to overtake here and because my pace is not exceptional. The start will be essential, as it occurs often, then we'll see how the race develops. In 2015, I was faster, so tomorrow it'll be harder."

Besides what will happen tomorrow, we can already take stock of Rossi's and Yamaha's season, and Valentino honestly tells us what he thinks.

"Personally, it was a difficult season and below my expectations. We had some hard times. The situation improved, but I wasn't able to replicate the podiums at the start of the season. It was an important season for Yamaha, since the work improved this year, and they can be optimistic for the future, having raised the level of the bike."

Changing the subject, another topic is the calendar. First, because of to the low temperatures that are partly disturbing the weekend in Valencia.

"It's not a great idea to come to Valencia in mid-November, but those who organize the championship have an interest in closing the season in Spain. It's true that we've found higher temperatures in the past but, in recent years, we've been met with winter. Another thing that's too bad is going to Phillip Island in winter, given the place and track. We talked about it for many years, but nothing could be done about it."

Another relevant point is that of the continuous addition of races, which Rossi jokes about. “For me, the line that is now being followed is the American one, that is to say, 43 races in a season but shortening the weekend, starting, for example, on Saturday. Now, every weekend is a long journey, so making the weekend shorter, maybe two days, could be an idea."