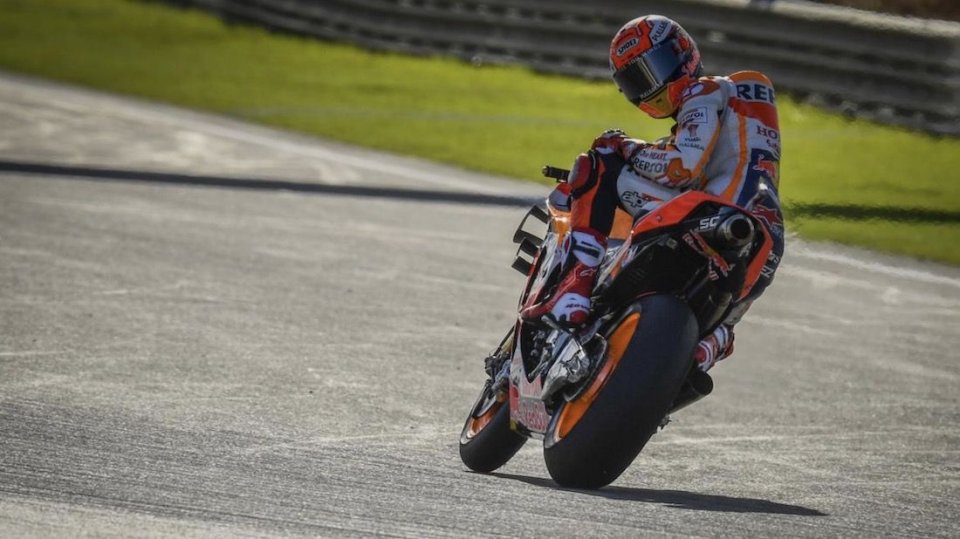 This is perhaps the most difficult moment of Marc Marquez's season. The Spanish rider has been world champion for 3 races. He has defeated all types of competitors and, in fact, with this championship, he's established his definitive dominion in the category. Besides his fall in Austin, Marc's worst result was a second place, and now he's preparing for the 2020 season, as calmly as possible, in a team that satisfies and assists him and that seems to have built a motorcycle that is perfectly tailored for him. You'd say that everything's perfect. Instead, Marc is in a complicated situation, caught between a rock and hard place, or between Honda (to which he has been tied to for years and with which he won and triumphed) and his brother Alex, world champion in the Moto2 and candidate to take over for Jorge Lorenzo, who retired from professional racing yesterday. Is Alex the ideal teammate for the future? Or is there someone else you'd prefer from the other side of the garage?

"I can't answer this question, but I think you can imagine what I would like to say to you," Marc said, laughing. "This is a decision that doesn't depend on me. I won't pressure Honda. They have to choose the way they want to go and see if they want an experienced rider or a young one with potential. It's a real honor for me that the Moto2 world champion is on the list of possible Honda riders for 2020."

We talked about Jorge Lorenzo's retirement after just a year with Honda. Last season, right here in Valencia, the World Championship had greeted Daniel Pedrosa, who also had left Honda and abandoned racing forever. Add to all this the fact that the Honda only seems to be tailored-made for Marc and that no one else can ride it satisfactorily. Would your brother be able to?

"I think Alex is ready to ride a MotoGP. He's a rider who needs to do things calmly. Even when he arrived in the Moto2, he suffered a little, but now he's fast and won the championship. He's riding really well and, in my opinion, it's time for him to look ahead. The Honda is a very difficult bike, that's true, but Honda is Honda, and the bike won 11 races and got 17 podiums this year."

Couldn't it be difficult for him to have you as a teammate?

"Yes, but every rider is always compared to his teammate, even if he is your brother. I spoke to him, and he seemed calm. Now he has his own team of technicians who understand him and with whom he has a relationship. He might not have this kind of treatment going through the MotoGP. I was lucky with Santi Hernandez."

Speaking of the market. Everyone knows that your contract with HRC expires at the end of next year. Do you already have a renewal offer?

"We started talking about it with Honda. They always have the first move in hand because they allowed me to be here, to be a MotoGP rider. Obviously, we both asked for something else, and now we're looking for the best compromise, but there's time."

On the weekend of Jorge Lorenzo's retirement, and with a result already reached, Marc Marquez was able to have a leisurely moment and thought about what professions his colleagues would have chosen if they hadn't become MotoGP riders.

"Crutchlow and Miller could have been comedians. Maybe Crutchlow is better suited between the two. Iannone, if he weren't a rider, he would be a fashion icon. Just look at his Instagram profile. Quartararo could be one, too. His style is a but little Hamilton's. Petrucci should be a wrestler, while I see Valentino being the owner of a MotoGP team. I could participate in "Dancing with the Stars", while Lorenzo could free fall from space to the Earth, like Felix Baumgartner."

Speaking of the track, how was your day today? We saw you do a different thing than usual.

"Since I was confident of winning the championship, I started working differently on Friday," he confirmed. "I'm trying to understand some things, some concepts of the bike, and change some important pieces. I'm working in a good direction to better prepare for the 2020 season."

In general, what did you focus on today?

"Today was a good day," said the world champio . "I worked a lot for the race trying to understand what the best tire is, and now I think I have a better idea, even if we found very different conditions from morning to afternoon. I didn't do a time attack, but I'm still up front. Yamaha and Suzuki were really fast this weekend, so it'll be difficult. I saw their pace, and I'd say we're there."

As for the pace, who do you see as a favorite?

"Maverick and Fabio are very fast, but Rins is also up there with them. I'm not bad, even if it seems to me that Vinales is the favorite."

It was very cold today. Arriving from Sepang where, on the contrary, you had to deal with really hot weather. Could there be safety hazards in these situations?

"There are two classic turns where you fall here: 4 and 10-11. In these points, we riders are much more careful, especially when it's cold. Actually, it is quite typical to find these temperatures in the morning in Valencia, and it's complicated for us, especially for the Moto3. The cold is a limit, even if the 9°C temperature of the asphalt is a bit false because it's measured in the pit lanes and in the shade. They're a bit higher on the track. We were lucky enough today because there weren't many clouds like last year. However, Michelin brought good tires, all of which are soft enough to ride safely even in these conditions."

In the world of riders and constructors, the only thing missing for Honda is the best team title. You're two points behind Ducati. The mission seems to be one of those really complicated ones. Could you do it?

"It's difficult but not impossible,"  he said. "Not everything is in my hands, but I'll give it one hundred percent to achieve this goal. Today, the Ducati riders were not very fast, so we could have a chance. Jorge is also working to go fast and get points."

VIDEO - The flames spread during a day of free practice, no harm to people or structures
5 days 23 hours ago

The reigning champion wins race 1 but ends up on the ground in race 2, giving the Suzuki rider his first career success. A 4th and 7th place with a...
6 days 5 hours ago

A non-stop week for the Ducati rider, beginning with the Misano tests, then a bike ride to Tavullia, and today on the Dorno track
1 week 2 min ago