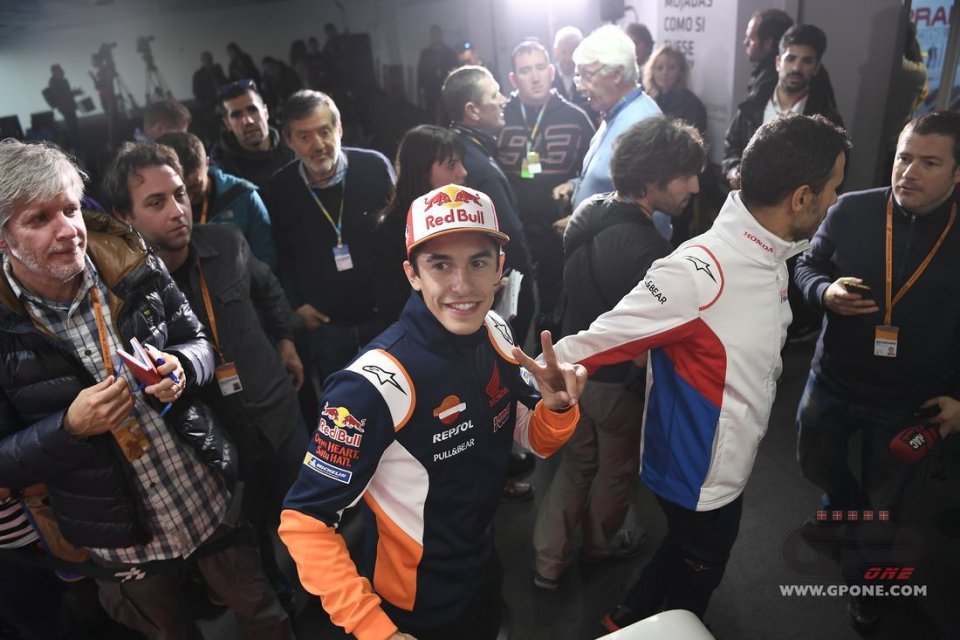 We could talk about Marquez's second place in qualifying, about the chance to finish the season with the teams title or with another victory, but the questions for him have only been about one subject: his brother Alex. All they're talking about in the paddock in Valencia are the two brothers united under the same roof, namely Honda's in 2020.

"I said it yesterday. The decision isn't in my hands. Honda and Alex have to decide, " Marc said. "I know he's on the list of possible riders, and this makes me proud, but he's not alone."

Sharing the box with you is not a walk in the park...

"Everyone knows that Honda is one of the most difficult bikes with which to debut in the MotoGP, and being in the official team is a great responsibility. In fact, some riders refused this chance in the past. That's why I say that it's Alex who has to agree to this project."

But wouldn't you like to race with your brother?

"I'm first and foremost a professional. So, if it were to happen, my teammate would be the Moto2 world champion, not my brother. I first shared the pit-box with Pedrosa, then with Lorenzo, and I don't know who it'll be next year, but I know that I'll work to win the World Championship. I don't care about anything else."

Are you being entirely honest?

"Point number 1 is that anyone who is my teammate is a rival for me. Then, I certainly want the best for my brother, as for every person I care about. That's normal."

Aren't you giving him any advice?

"We haven't talked about it at all. We arrived in Valencia just to enjoy the last race of the year, and at least I'm doing so," he said, laughing. "Emilio Alzamora, his and my manager, and the heads at Honda have to discuss and understand what the best solution is. I don't even know if they had a meeting."

But you said that Alex would be ready for the MotoGP.

"Everyone must follow their own path, make their own choices. I said that Honda has two options: either hire an experienced rider or bet on a young one."

If you were the Honda team manager, who would you choose?

"The MotoGP world champion!" He laughed. "I don't know what I would decide. There would be so many things to evaluate. Alex doesn't need me. He's showing what he's worth on the track, and I have no intention of forcing the situation because I'm a professional. Alex has to decide what is best for him."

"He has to follow his own path. The one that is best for him, not the one I create for him. He may have a different vision than mine, and rightly so, because he is 23 and must understand what the project he wants to follow is."

Among the many questions about the future, we risk forgetting tomorrow's race.

"On paper, I have the chance to fight for the victory. I didn't think I was that close to Quartararo in qualifying today. He and Vinales seem to be the biggest rivals, but you can never tell with Miller, especially in the early laps."

Have you taken advantage of these two days, even for some tests in view of next year?

"Yes, since 2020 is approaching and some new pieces have already arrived. This complicated the weekend a bit and, when I fell in the FP4, I was experimenting. But I feel good, both with the soft tire as well as the hard for the rear."