Sunday at Sepang was a day of recoveries. We're referring to Marc Marquez and Andrea Dovizioso of course, both able to reach the podium having started from the fourth row of the grid. But the man in the Malaysian spotlight was Maverick Vinales, who scored his second win of the season after Assen, making up for his crash at Phillip Island.

There was even some satisfaction for Valentino Rossi, his fourth-place finish going some way to helping him turn the page following previous results.

This is what went on at the latest championship round in the words of our very own Carlo Pernat.

“There were four protagonists at Sepang. The first is Vinales, I didn't think he could win, but instead he raced like the Lorenzo of old, proving to be smart. Despite his Yamaha struggling along the straights, he tried to break away right from lap one thanks to his incredible pace. This win could alter the balance in Yamaha, leading the manufacturer to reflect. Then there's Rossi, who put in a stratospheric performance. In doing so, he showed to be highly trained and still hungry, confirming that he can fight for the podium. He'll be angry about fourth place of course, as it's the runners-up prize. Then I add Marquez. He raced with three infiltrations, in his shoulder, ankle and elbow, without complaint. He spent the evening before the race studying all the corners, proving to be a great professional once again. Marc raced without saying a word, something others didn't do. It goes without saying that he's a phenomenon. Lastly, there's Dovizioso, the only rider able to fly the Italian flag. His future in Ducati won't be easy, in fact I think he'll have to leave Borgo Panigale come the end of 2020. Hats off to him for what he's done”. 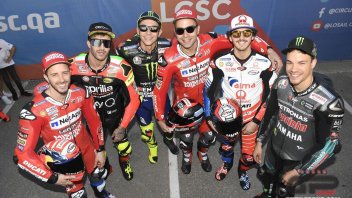 In a video on You Tube, the driver defended his reasons but confirms the end of his experience with Audi in the Formula E
1 hour 56 min ago

It was decided by the Board of Directors via video conference call. Previously the FIM-Dorna contract provided for a minimum of 13 Grand Prix. In F.1...
1 day 19 hours ago

An embarrassing moment for Audi Formula E driver Daniel Abt who, during the virtual race in Berlin, had an eSports professional race in his place:...
2 days 13 hours ago

Rainey: "With the way things are in California right now, there is no way we can race with spectators at Laguna Seca in July ". The series is set to...
4 days 21 hours ago