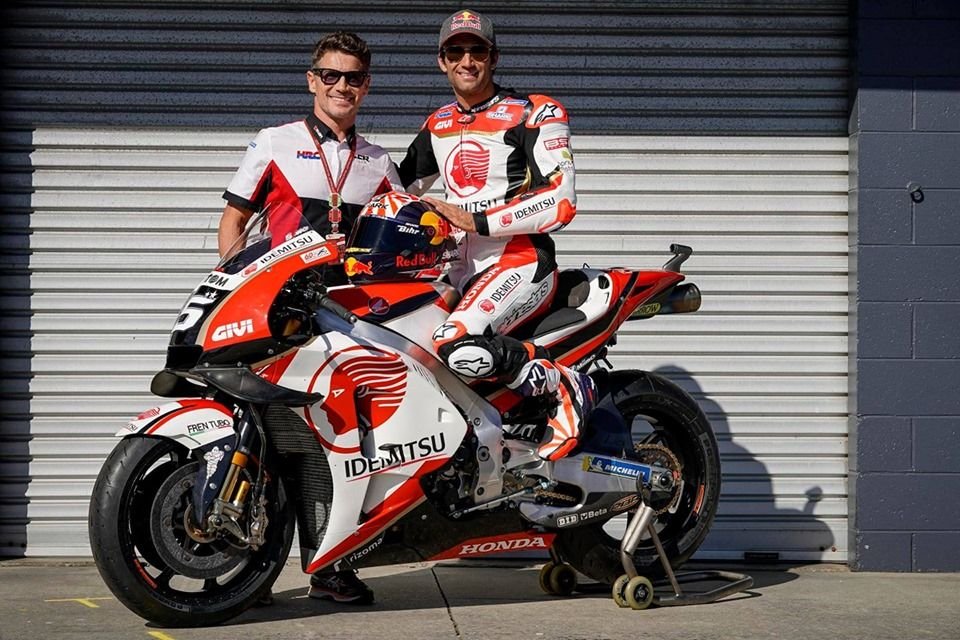 Lucio Cecchinello had the greatest satisfaction of this season at Phillip Island thanks to Cal Crutchlow's second place, after Maverick Vinales' fall in the last stages of the race when he was battling it out with Marquez for the victory. A podium that Crutchlow and one of the Paddock's best teams hadn't reached in a long time. In fact, the LCR has the enviable status of being the team that is officially supported by HRC, and the bikes the British rider can use have the same specifications as those used in the race by Marquez and Lorenzo.

What on one hand is a great honor, on the other is a huge burden for the Marquez era. The Spanish rider's performance is the very difficult point of reference with which to benchmark the performance of all Honda riders and, in this 2019, they have truly represented the litmus test of assessments for Crutchlow's and Jorge Lorenzo's season. The difference between the two is represented by five world titles for the Spaniard and one writing on a helmet that reads: "I'm not a great rider, I'm a champion."

Crutchlow, however, is the only one of the two who has sometimes at least received some satisfaction, while the night seems increasingly dark for Lorenzo. We interviewed Lucio Cecchinello at Phillip Island after the end of the Grand Prix, to hear his thoughts on the situation of the current Honda riders and also on the wild card, who is currently Johann Zarco.

Let's start with the rider who has little to do with LCR, but who experienced a terrible season in 2019, using the same bike with which Crutchlow finished second here at Phillip Island. What's your idea on Jorge Lorenzo's situation?

"Actually, they're not things that concern me, and I don't ask for information from Kuwata or anyone else. I don't ask what their intentions are because, like I said, they're not things that concern me. What I can clearly say is that it's a difficult moment between Jorge and the team, but that's normal because seeing a 5-time world champion finishing last at one minute and twelve seconds, seems like a really depressing thing for him, for his image."

This is the present. And for the future? Can this continue for an entire season?

"Jorge doesn't like this bike. He'll wait to see how he'll do with the 2020 prototype, then I expect him to continue, or before the season starts, to say: 'Look, I can't work with your bikes. I'm going to stop racing.' This is what I think because I don't want to imagine that Jorge is willing to do a whole year, which are 20 races, and always come in last. I don't think it's in his nor in HRC's best interest."

If he were to stop, Zarco would be ready. The rider you accompanied on his RCV debut. How did this contact between the French rider and the Honda go?

"It was very interesting. I think we also have to wait for the Malaysian race for a first analysis because here he definitely had a few good laps and all of them were today. The wind was very strong Saturday. He did a few laps on the dry asphalt Friday, but it was really cold. We had 20 minutes of warm up this morning, immediately followed by qualifications."

Why do you define his debut as being so interesting? Maybe because of the comments on his bike?

The really interesting thing is that every time he came on the track he improved. Every time he got off the bike he'd say, 'I feel the bike allows me to do more'. He never complained about the bike. He also commented on the front of the bike saying, 'the funny thing is that everyone says the front of the Honda is difficult and doesn't give you confidence, while I feel that I can push a lot more. I feel it steady on the front.'"

"ZARCO WAS AMAZED BY THE HONDA'S FRONT, HE CAN AIM FOR THE TOP TEN.

We should point out that Johann used Nakagami's bike, which is a 2018.

"He has a 2018. He also said that he understood something compared to the bikes he has ridden before and that this is a great racing bike because he feels that you have to bend a lot and corner holding the brake, in order to ride it well, so you have to be really confident with the front. He did say he likes the way it is and, with a bit more confidence, he could be in the top ten."

Crutchlow had the best result of the season here at Phillip Island. Was it thanks to the track?

"Phillip Island is a track with several unique characteristics. You always see group competitions. It's a very fast and also very ridden circuit. There aren't many important points where you brake. There's no crazy hard braking that you have on other tracks, except at Turn 4. Actually, the problem we had this year with Cal was, above all, managing deceleration because we've never been able to find a good compromise between handling the bike and braking stability this year on the 2019 bike, which is fine for Marc and it's the one with which he won the world championship and that they tailored to his needs, rightfully so.

"HRC TAILORED THE BIKE TO MARQUEZ'S NEEDS, AND RIGHTFULLY SO - WE CAN'T FIND THE RIGHT SET UP FOR CRUTCHLOW"

Is the problem mostly in braking?

"Yes, and Cal then has this problem that he holds the front brake in a very aggressive and violent way, so his deceleration is entirely based on the front because he doesn't use the rear brake if not at the last moment when entering a corner, as seen from the fact that he always has his leg out. This technique causes the rear to slip, which is more evident as compared to the others. By lifting the rear wheel, the traction control goes crazy. He can't work evenly because he ends up handling the rear wheel that goes from being up, to touching the ground several times. This makes it difficult to handle braking."

Do you think Lorenzo also had problems with this bike for similar reasons?

"I think Lorenzo's problems can be attributed to two phases. The first is related to the first time he got on the Honda after getting off a Ducati and, if we look closely, it didn't go badly. If we look at the times he got at Jerez with the 2018 bike, he was a few tenths from Marc. He was close."

"The 2019 bike probably gives riders less confidence and sensitivity on the front. To make it turn, it needs to be forced in a very decisive manner, making it slip in the rear. By forcing, Jorge fell a few times too many at the beginning and later also lost confidence. In my opinion, analyzing Jorge's performance, a good 70%, and maybe even 80%, depends on the lack of confidence and the rest from his riding style. Now it's quite obvious that he's no longer confident.

You're okay with both riders for 2020. Instead, the scenario could change for 2021, with Crutchlow that seems to want to withdrawal. What do you think?

It's true that Cal turned 34 a few days ago, and it's true that he, like all riders, lose some motivation when they reach a certain age and no longer get certain results. Our job in this period was to do everything to give him motivation and regain confidence. In my opinion, if we continue to get results in the top five, like we did in Motegi and here, where we came second - also thanks to what happened to Vinales, but it would have been a third place anyway - things will change."

So the important thing will be to keep the idea of a withdrawal at bay at the expense of the results achieved?

"If we can race well and get on podiums in 2020, I think Cal's desire to race will come back. Actually, it's not that he doesn't have it now, but maybe he'll be even more willing to stay and maybe consider postponing his withdrawal. We would be happy to work with him."