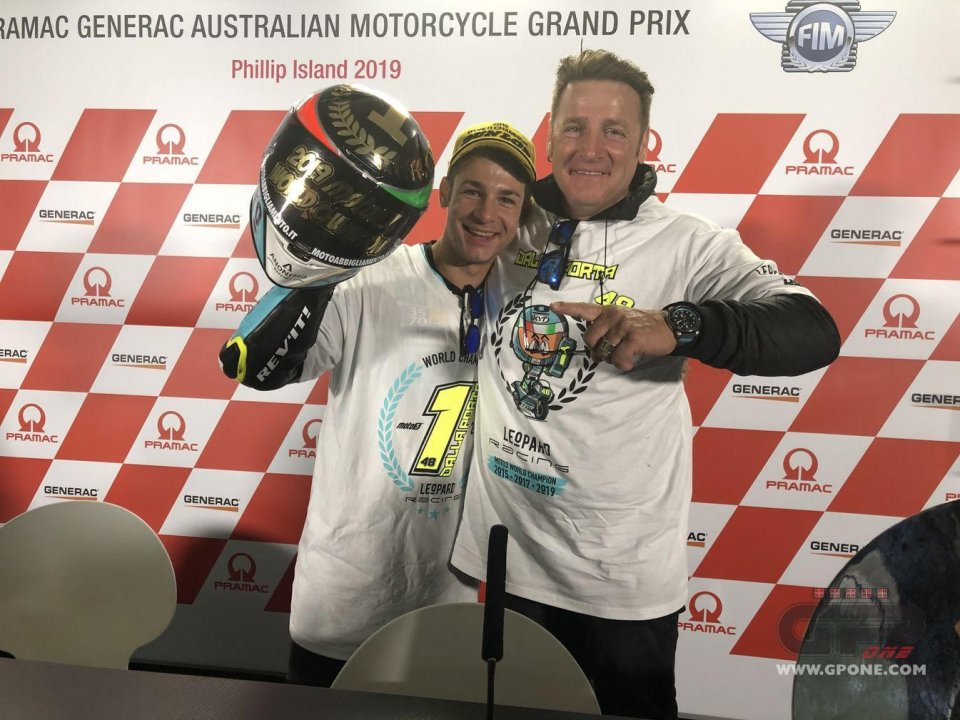 Massimiliano Dalla Porta is always there with son Lorenzo but without ever being intrusive. A discrete but cheerful presence in the Leopard team's garage, anyone who sees them together understanding that the relationship is more that of two friends than father-son.

"I've always been an enthusiastic biker - explains Massimiliano, thinking back to the beginning, as he wears Lorenzo's celebrative t-shirt  - and this is why his grandma bought him a little MX bike, a Beta 50, for his 5th birthday. But instead of smiling, he started to cry, so much so that I asked him whether we'd got the wrong gift. Also because the only thing he said, before crying again, was that the bike was just like mine".

The fear, if that's what it was, soon vanished.

"One year later we were watching a bike race on TV when he suddenly told me that he wanted to stop playing football, the sport he played at that time. He had falled in love with motorcycling. So I bought him a mini bike, and he rode that until he was 10. We couldn't go to the track, due to his age, so we used supermarket parking lots, of an evening when thet were closed. I'd put down cones to simulate corners and he practiced like that".

To complicate things a little, Massimiliano would make adjustments but Lorenzo didn't fall for it:  he'd immediately notice the changes. He won the Tuscan championship in those years and needed a change, but he couldn't ride at Mugello due to his age.

"His early tears were a distant memory - continues Massimiliano - he was having so much fun but he was also fast, which meant Honda called him up for their MiniGP project. Then he also tested a Aprilia RSV 125 when he was 14, but he won the Italian championship with Honda in 2012. He was the last to win in that category before Moto3 came in".

Unfortunately, he found himself aboard the Italian Oral, a brave but rather uncompetitive project.

"unfortunately it wasn't a very fast bike. but the following year he was on the Peugeot, also with an Oral engine, and the results didn't change much. So in 2015 we decided to leave the Italian championship and go and race in the CEV with Husqvarna. That year, he stood in for Isaac Vinales from Indianapolis onwards, gaining experience."

In 2016 he won the CEV championship with team Laglisse. He then took Fenati's place in team Sky VR46 after the Italian was fired following the Austrian GP. The following year, he rode a Mahindra, another less than competitive bike.

"The turning point came with Leopard, the team wanting to give him a two-year contract. The team's intuition allowed him to win the title on his second attempt", concludes Lorenzo's father who, with his son's title now secure, can now relax in Malaysia together with team Leopard, the squad having now won three world titles, with that of Danny Kent in 2015 and Joan Mir in 2017. A title every two years, not bad for a team backed by Italo-Luxembourger Flavio Becca and managed, in the garage, by Christian Lundberg and Miodrag Kotur, who we remember from Ferrari, alongside Jean Todt and Michael Schumacher.

The last Italian to win a world championship was Dovizioso in 2004. And Lorenzo Dalla Porta's future is written, or rather a two-year contract in Moto2 with Italtrans, where he will flank Bastianini.