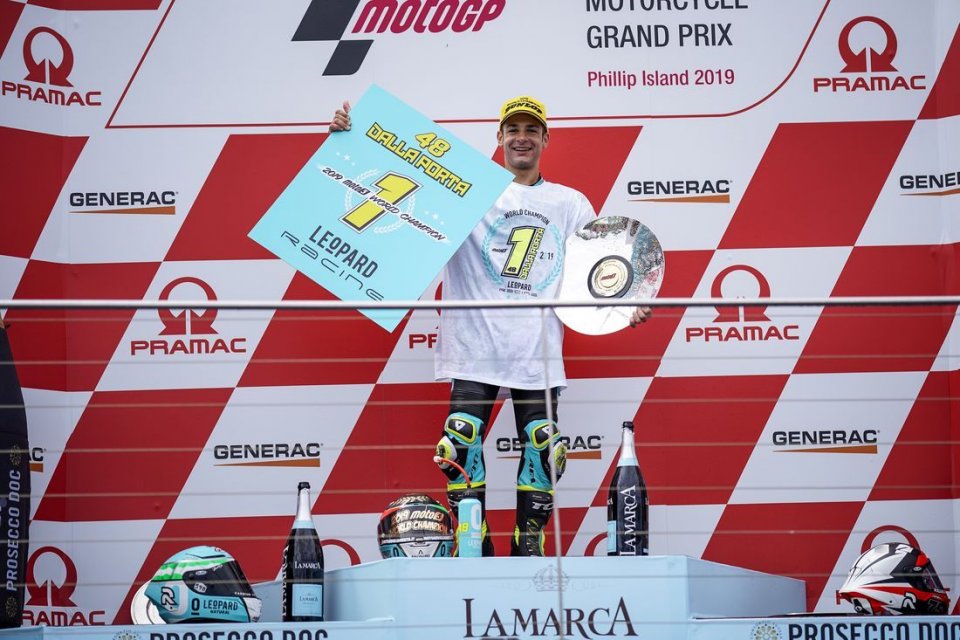 It was cold, windy, and rainy at Phillip Island. Luckily, Dalla Porta brought some sunshine to this race with his Moto3 title. A title he won like a true champion, one he deserved, without any ifs, ands, or buts. Good and humble, we expect a lot from him, even for the years to come.

Like Bagnaia, who finally got it right in a MotoGP race. Missing the podium by 55 milliseconds, which would have been the icing on the cake, but that same cake is still good. And we'd like to accompany the cake with a toast to Iannone, sparkling like Andrea in Australia. Marquez ate the rest of the meal, while the other riders are now pretty used to fasting.

They'll  be in Malaysia in a few days. Maybe the menu will change there.

THE GOOD - Lorenzo Dalla Porta woke up and discovered that it wasn't all a dream. If anything, he made every Italian dream, in the desperate search for Dovizioso's heir in the cadet class. After 15 years, a guy with a Tuscan accent and the courage needed to not be afraid of making mistakes, showed up. Tears and glory, on a perfect day, with the winner's trophy in his hands and the champion's laurel around his neck. Many can only dream of something like this. He did it. Not Lorenzo.

THE BAD - How nice to see all the riders discussing safety and recommend cancelling the qualifications to avoid risks. All the riders, but the MotoGP ones. The Moto2 and Moto3 riders must be immune to the wind, and also to the dead seagull that was in the middle of the track at Turn 9 for all the FP3s. Certain precautions are okay and must apply to everyone, but it always seems to have something to do with a Series A championship and two other Series B ones. That's not at all cool. 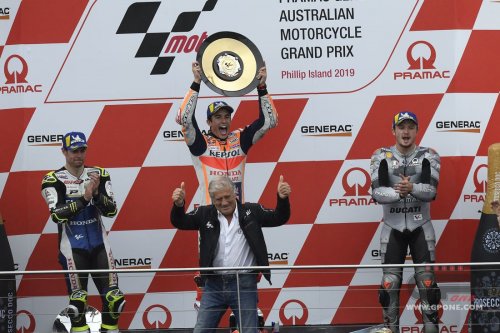 THE BAD - Lorenzo already has his own problems and maybe overtaking on the outside, with Marquez's "slicing of the wing" in the FP3, could have been avoided. Jorge looked like an amateur on a track day with the best. A champion like him deserves a little more respect, especially from his teammate.

THE CONFIRMATION - We're still here talking about Marquez, of his 5th consecutive victory, of the record of his successes on the Honda in the premier class (55 compared to Doohan's 54), of the 14 podiums in a row, and of how fast, ruthless, and clear headed he is. We've finished the adjectives. But we'll spend the next few days studying the dictionary. Promise.

THE DISAPPOINTMENT - Franco Morbidelli's symphony is still unfinished. The Petronas rider has been keeping the right pace during practice for some races now, but he hopelessly hit the wrong note in the race. We don't know why, but the Brazilian rider from Tavullia must find his inspiration again. Leaving things unfinished is not okay.

THE ERROR - We usually put a rider behind the blackboard, kneeling on bolts. A rider who's knocked out at only a handful of corners at the end. But Maverick Vinales had to ìdeal Marquez. He dictated the pace throughout the race and simply had to try. He didn't do very well. Try again, you'll do better next time. 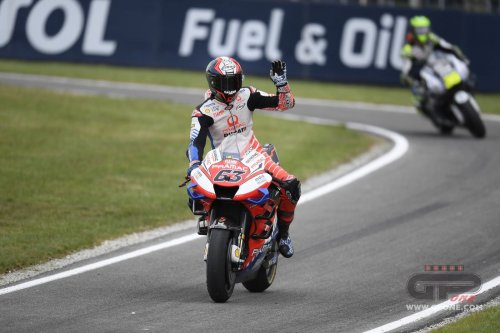 THE SURPRISE - Two, like those at Christmas under the tree, but a Eucalyptus. The first is Pecco Bagnaia who (better late than never) showed what he's capable of doing on the Ducati. We saw the rider who had won the Moto2 title a few months ago, and all we can suggest is to not let him get away again.

The second is Andrea Iannone, who tamed the Aprilia on one of the most difficult tracks in the championship, but one which he loves. When he goes over the edge, he puts on a show, and he's definitely put several on. Noale's bike is still not ready to repeat certain performances, but Andrea makes you want it to be... and quick.

THE PASS - Maybe he wanted to celebrate his 400th GP or maybe see the track empty before him again. Valentino Rossi's overtake on the first corner was of little use in the overall race, but he reminded us of what he was capable. Unfortunately, it vanished in the blink of an eye.

THE INTERESTING FACT - Moto2's rocket man is Stefano Manzi who, in the warm up, touched a record speed of 301.8 km/h on his MV Agusta. Forward's rider was only slow on the straight, but he still asserted himself in the race.

THE I TOLD YOU SO - A chorus (with us present) in the Phillip Island paddock on Saturday: "The race is Vinales'." That's what happens when you bet against Marquez.