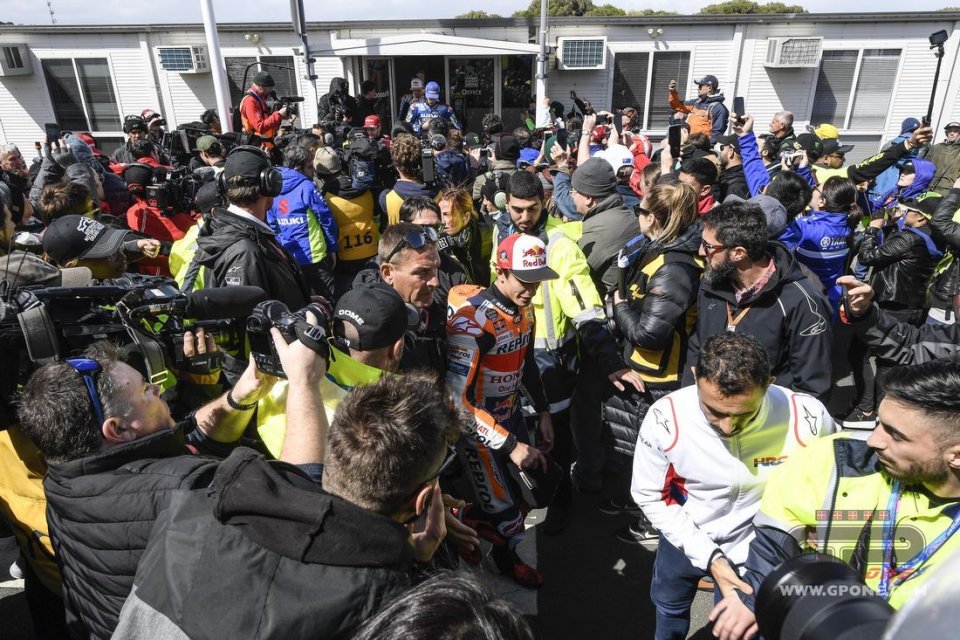 Maybe Marc Marquez felt called into question when Dovizioso lashed out at the riders wanted to compete in the qualifying session. As a matter of fact, the Honda champion was in favor of continuing with the regular program and expressed his vote in the Safety Commission.

"I'm not saying that the meeting was unprofessional, but a little confusing because some riders started bickering with each other. So Loris and Carmelo (Capirossi and Ezpeleta ed) asked us to vote to clarify the situation. I and 4 or 5 other riders said we could have continued," the Spanish rider explained.

But with one clarification.

"They didn't ask us if we wanted to race, but if it was possible," he explained.

So Marc doesn't feel like Dovi directly accused him.

"What would my interest be?"  was his rhetorical question. "I really didn't cared. Even if they canceled the qualifications, I would have started 6th anyway with my free practice time. The riders at the bottom of the standings are the ones that have to recuperate. it wouldn't have been a problem for me."

Having clarified this, Marquez argued that it would have been possible to dispute the qualifications.

"Two issues come into play here. The first is whether it was possible to ride in those conditions. The second, how many risks we would have taken," he continued. "We could have certainly rode because we were riding a second from the best times of the weekend, but it's also true that the risks would have been very high. So when they asked me what I thought, I replied that we could have because the conditions weren't too different from those of the FP3."

Marc was clear about this.

"I'm fine with doing qualifications tomorrow. It's a good option, " he continued. "But if it's still windy, what will change? I'm not saying it wasn't dangerous, but it was still within the limits. When you ride alone, you feel much less wind. The problem is when they overtake you. For example, the wind pushes in the main straight, especially at the end of the grandstands. In fact, I always stay more to the right to avoid problems at that point."

Before leaving, the Spanish rider commented on Zarco's debut on the Honda

"He didn't do badly," he said. "But we have to keep in mind that we raced in special conditions on a special track. We can't judge now. We have to at least wait for the race in Malaysia. I believe this is an important opportunity for Johann because he can prove to deserve to get on a bike in the MotoGP."