With a bound in the final, Andrea Dovizioso managed to close the first day of the free practice session at Phillip Island in second place. After a morning spent in the center of the group and with the tenth time, Dovi worked on his race pace in the afternoon, managing to score the fastest lap in the final session using a new soft tire.

"I was able to do a fast lap only in the final," Dovi continued. "I had to mount the new tires, but I wanted to be in the top 10 because it's going to rain tomorrow."

Did you work on the race pace in the FP2. What did it seem like to you?

"The situation is strange. The sensations on the bike change in every session and depend on many factors. At the moment, Marquez and Vinales have a pace that's better than anyone," Dovizioso said . "I'm in the group, and that's a good thing, since I'm still close to the best and everything is possible, but I'm happy."

What sensations did you get from the track?

"The grip is low, like it is every year, and it's really hard to stop and corner the bike. You can't relax on the bike on a track like this."

Which could be the tire for the race?

"I tried the medium and soft at the end, and it seems like the medium is the worst. The others compared it with the hard, but I don't know see the difference. It seems like the hard one is the best for the race, but I wouldn't rule out the soft one either."

"The new tires aren't bad " said Dovi. " hey have a lot of grip, especially when entering corners. This helps my bike a lot, and let's me brake later and set the line more easily. With this year's tires, it's not that simple because when you brake hard, you always make a mistake. But we'll also have to see what the others think." 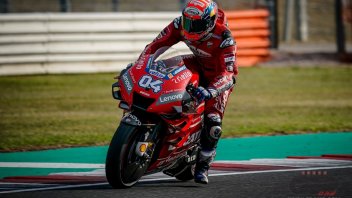 Dorna signed from 2022 to 2026. The Ricardo Tormo circuit will alternate with the others on the Iberian peninsula but will remain the last race of...
5 days 19 hours ago

KTM's sports manager at the gates of 2020: "This is the highest point of engineering applied to motorcycling and has taught us to go beyond our...
1 week 19 hours ago