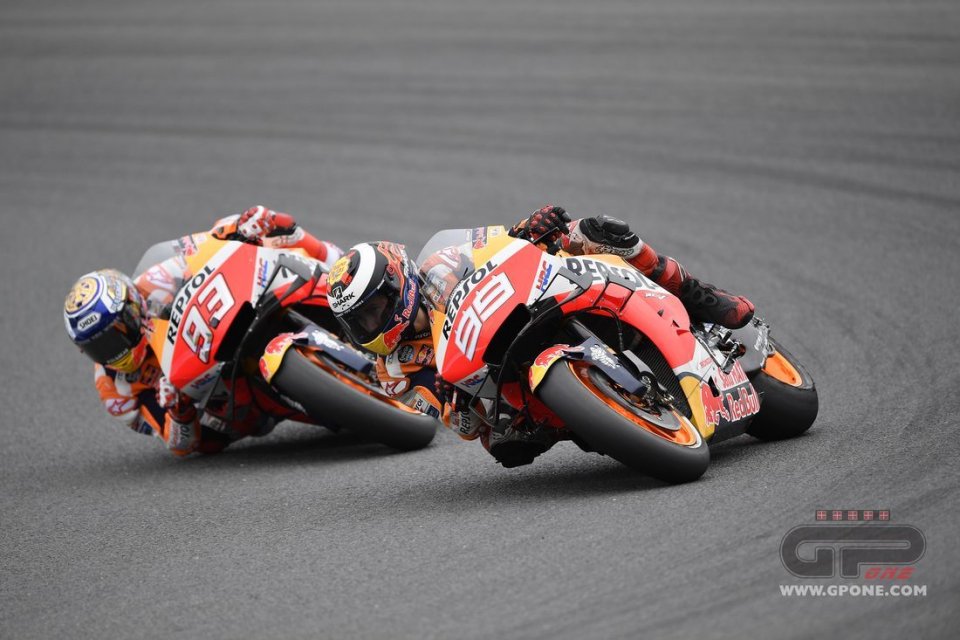 With the rider and team titles already sewn up, Marc Marquez seems more relaxed than ever as he heads into the Australian GP at the beautiful track of Phillip Island, a circuit at which he's won 3 times in the past (once in 125cc, twice in MotoGP).

How are you feeling as you head into the weekend?

"I had a great weekend in Japan. The goal for Sunday is to fight for the win. The problem here is that the track really needs to feel like 'yours' in order to be able to run a good race. There are fast turns with a certain level of risk that can be a problem if you don't have the right feeling with the bike”.

What kind of weekend will it be? Who might be able to bother you?

"I think I'll be battling the Yamahas and Suzukis this weekend because those bikes suit this track well. We'll need to work well right from Friday”.

One of the day's hot topics is the hype that was created around Jorge Lorenzo's press conference, the rumour being that he would announcement his retirement. An announcement that never came, Lorenzo categorically denying the rumours, the rider therefore set to stay with Honda in 2020. Have you spoken to him about bike development?

“We talked at length in Japan. It's clear that this bike is not helping him but I told him what I've always said. This is the character of the Honda, particular as is the riding style you need to be fast. You can change certain things to improve but the spirit of the bike is very particular".

One man who's set to get a front-row seat this weekend (and for the rest of the season) is Zarco, who replaces injured Nakagami aboard the Honda of Lucio Cecchinello's team. How do you think Johann might do on the bike?

“It's hard to predict what will happen this weekend. Zarco is a great rider who's scored some excellent results in both Moto2 and MotoGP. Of course this isn't the best situation for him as it's not easy to show your potential with a new bike in just three races. I'm sure he'll work hard in order to show Honda and other teams that he deserves a seat in MotoGP”.

Is it better to start with the 2018 bike rather than the 2019 version with which Lorenzo debuted in Honda?

“At this track, I think the bikes are both the same. If we'd been in Malaysia, maybe the 2019 would have been better due to its more powerful engine”.

The other championships may be sewn up this weekend, seeing as Dalla Porta needs just 4 points more over Canet and Alex Marquez 15 over Luthi. Do you think your brother can do it?

“it will be difficult for him to win this weekend - says Marquez - but I hope it doesn't go to Valencia. he needs to stick to his usual work method and if he doesn't win this weekend it's not the end of the world, he can get it done in Malaysia”.

Will you give him advice and work with him this weekend?

“I'm focused on MotoGP but I'll be supporting him of course, he deserves this result. We're very close and share a home and everything else, but on track, we work separately, each with our own technicians. Alex has people who help him in any case, I support him but don't need to help him”.