Carlo Pernat: "We'll talk about it again next year."

Andrea Dovizioso: "Carlo, you say 10 things, but you get only one right. That's what you usually do."

Andrea Dovizioso: "No, no. It's still too early to think about."

A funny skit held at Phillip Island, enlivened by lots of laughs. During one of our Bar Sport (full video HERE ), Pernat had predicted Dovi's future: "Either he retires or goes to KTM." Today, the manager and rider, who have known each other for a long time and are good friends, had a face-to-face. The result was a fun confrontation, where Carlo wasn't put in the shade.

Maybe it's still too early for Andrea to think about the future, even if it's impossible not to give in to temptation right now. Another year with Ducati is definitely waiting for him but, before that, there's the Australian GP, which is kind of like kryptonite for Dovi.

"When I think of Phillip Island, being optimistic always seems a bit too much," he laughed. "I was fast last year, and I got on the podium, but it'll be difficult to repeat. I expect that Marquez will be as strong as ever, but also the Yamaha and Rins with Suzuki."

Dovizioso knows that it's not just a question of motorcycles. He'll also have to work on himself this weekend.

"This is a track that instinctively does not suit me,"  he explained. "I'm a 'stop-and-go kind of rider, with lots of braking and accelerating, while the important thing here is to be able to make the bike glide."

What's more, the weather doesn't seem friendly. Not only rain, but also strong winds are expected.

"It's the worst possible news ever," commented Dovi. "It usually becomes a real hassle here, even if it depends a lot on the direction it's coming from. On a fast track like this, where you need a lot more cornering speed, the wind is really disturbing because it doesn't allow you to ride smoothly. But it'll be the same for everyone, and we'll have to adapt."

Petrucci thinks that, under certain conditions, the sophisticated aerodynamics of the Desmosedici could be a problem.

"It depends," he stated. "On one hand, the wings help the front stay lower and that's better but, on the other, if the wind is irregular, it can give you problems. All we have to do now is see what the conditions will be and figure out if and how much they'll allow us to work on the bike." 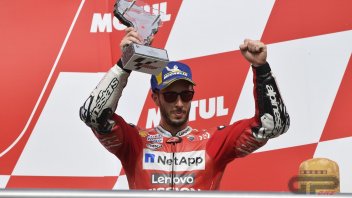 REVISED CALENDAR - The 8 Hours of Suzuka is confirmed on 19th July, financial aid for private teams planned
12 hours 29 min ago

"I was slow last year, but now I have everything I need to stand out. I wanted to win in Qatar, but a fourth place means a lot to me."
4 days 4 hours ago

As the situation remains in a state of constant evolution, new dates for the French GP and the recently-postponed Gran Premio de España cannot be...
5 days 11 hours ago