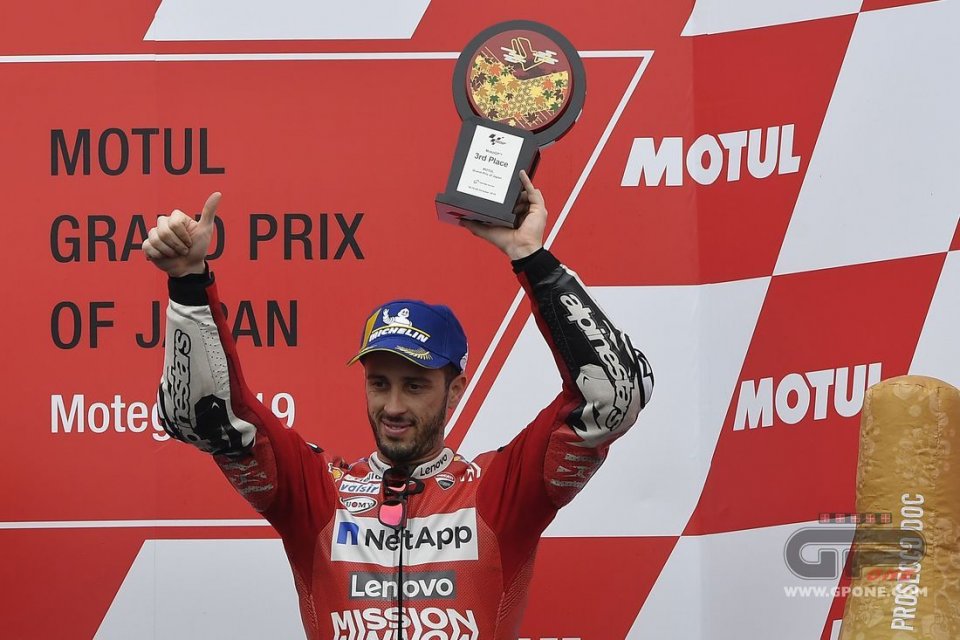 "f I think of the end of the race, I have some wonderful sensations. I was very fast, and I'm disappointed that I wasn't able to finish second. If I think of the beginning, it's frustrating that I had problems," said Dovizioso, after he got off the podium at Motegi. The Ducati rider was the protagonist of a two-sided race, unable to impose his own pace in the first part and (almost) irresistible a few laps from the end.

How do you explain this transformation?

“It was a strange race and, before the start, I had a lot of questions regarding the tires and the set-up. Finding the answers was stressful. Before starting the weekend, I thought I could reach a victory here. After the warm up, I didn't feel good on the bike. In the end, I didn't think I would get third place. I have to be happy, even the gap from the top riders wasn't that much.

But you don't seem particularly happy...

"I struggled too much in the first part of the race, when there was a lot of grip. It's the same thing that happens to us in practice sessions, and it doesn't let me remain in the top positions. It's surely a problem to analyze. If I see how I did at the end of the race, those initial problems disappoint me a bit."

Was it a difficult race to manage?

"At certain times, you have to stay calm because trying to be faster than your possibilities simply doesn't work, it only makes things worse. Your head makes the difference. You have to understand how to handle yourself. I had already done it in Aragon, otherwise, you panic. I started driving gently, without taking too many risks. Following Morbidelli helped me be more fluid and understand what my strengths were. This strategy helped me with my pace when the grip dropped and the situation improved."

The change in pace was surprising.

Because I took a lot of risks when braking, and I don't know if it was the smartest thing to do. A crash would have taken away important points in the championship. But I felt good on the bike and I did it. I was hoping to catch up with Fabio. I was so concentrated that I thought I was missing an extra lap at the end. It would have been the top for me."

Did you fear Vinales at some point?

"I didn't know which strategy to use with Maverick because I had never been behind him. I felt he was fast in mid corner and felt like he was trying to attack me. I was able to close and stop him in the slow corners but not in the fastest ones. He had chosen the soft tire and, when I pushed at the end, he wasn't able to follow me."

Was the medium on the rear the right choice for you?

"Absolutely, I didn't need all that grip in the early laps. I was also right to mount the soft front tire. It's a tire that can work on the Ducati in some tracks if you adapt your riding style. I did it, and I managed to be fast."

Looking at the standings, Ducati seems to be a situation similar to Honda's. Only you, like Marc, saved the weekend. Are you satisfied?

"It's been happening since I returned from summer break, but this data is of no use to me, unlike for those who analyze the races from the outside. It wouldn't change anything for me if Petrucci gets really close or at 10 seconds away, I know how to evaluate the kind of race he's had regardless of the numbers. It's dumb to say that the Ducati is fast when Danilo is with me. Petrucci did some special things in the first half of the season, but then he wasn't able to do them anymore. I continued to work, but in a different way, and managed to bring results home. I'm not satisfied if I give my team mates more or less seconds. I don't really care. I know what is needed and what needs to be improved, regardless of these things. If a race like this doesn't make me happy, there are precise reasons."

With 55 points ahead of Rins, at least a second place in the standings seems to be in the bag.

"I have a good advantage, but I'll have to be smart in the next races on tracks that are not the best for us."

Dovizioso happy with improvement but fears it’s not enough