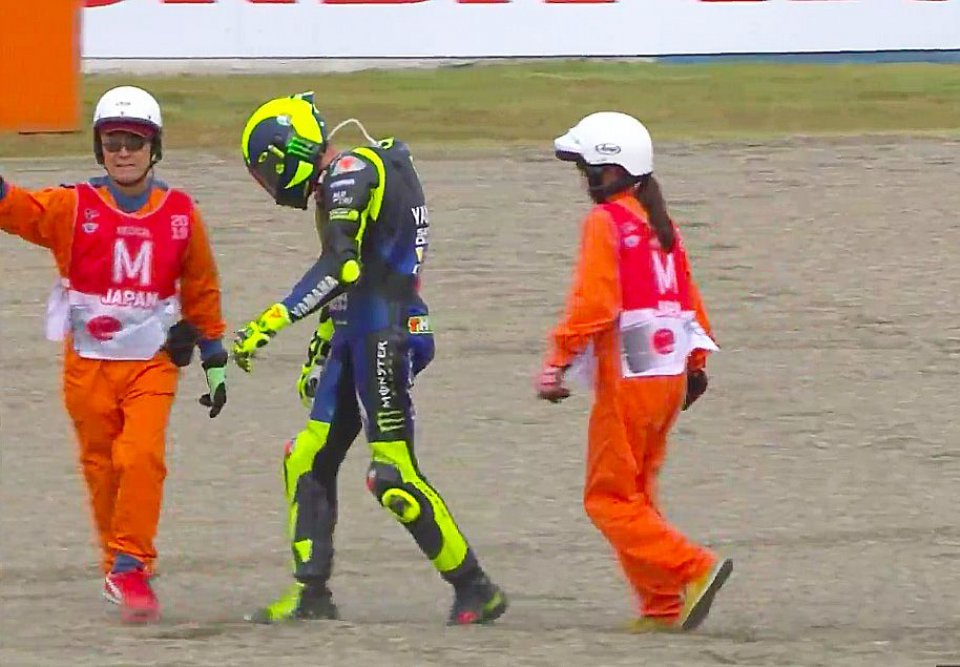 Valentino Rossi experienced a disastrous Japanese Grand Prix. After suffering in qualifying, with a tenth position on the starting grid, Rossi attempted a comeback in the race that, however, took place very slowly before ending completely in the gravel at the first corner of Motegi's Twin Ring.

A slight closure of the front of his M1 while he was duelling it out with Petrucci and, what was worse, there was no place on the podium for the Doctor at that moment, but rather a modest top ten in the same GP where all three of other M1s on the track were constantly ahead of him, from qualifying to the first part of the race.

There wasn't much to save in a budget that is continuously in the red, which they obviously musn't get used to. Rossi is aware that he can't accept to compete for these positions and, together with Yamaha, he's trying to find answers that he's not getting. Quartararo's performance with the 2018 bike also makes you wonder even more about the direction taken in developing Iwata's bike. Perhaps a step backwards could be a starting point for not making mistakes, in view of 2020?

The 2018 bike better than the 2019? I don' know. The problem is that I'm always the one who suffers a bit more than the other Yamaha riders in acceleration, and I'm also behind in speed. I'm a bit heavier, but there's not much of difference. Here, in my opinion, I could have done better starting from closer up front. My pace wasn't that far from the others, at least, if we leave the first three alone. The others were close."

We're experiencing a MotoGP where everything is at the limit. Marquez was left without gas after the finish line. Maybe Yamaha also needs to have a more extreme approach?

Yes, Marquez walked back, but they're doing their math well at Honda! Like Enzo Ferrari used to say, the perfect race car is the one that breaks down just after the finish line. This means that everything is at the limit. I'd like to have these problems. If the price to pay would be walking back garage, I'd do it!".

But are you still having fun on the bike?

"It's a bit of a difficult time because after some fairly good races, we've had a lot of problems in the last few. Then today my pace was constant, but I was wrong and I fell. I'd like to be faster to fight for better positions. Today I started badly. Not so much at the first corner, but after I found myself in a situation of confusion. It looked like a jungle. I think I touched a KTM when entering Turn ten, and we both went wide, losing some positions."

That compromised the race a bit.

My pace wasn't fast enough to recuperate. I recuperated something, but I wasn't strong today. In some laps, my pace wasn't bad, but everyone was fast today, and it was very difficult to try to recuparte from behind. When I reached Petrucci, I had a good duel. He made a small mistake, and I also made one. Then I made my mistake and fell. I haven't seen the data yet, but I think I made a mistake on Turn 1, and that's why I fell. The front closed and I slipped. But even without the fall, the race was really tough. I started too far behind and my pace wasn't that great. A difficult race."

Did you feel that you had the same potential like in the last few races, or were you hoping for something more?

"I think that I was already fast this time compared to the last races, but I started too far back, and it all became difficult. In the last few races, we never managed to be fast, and we have so many problems. I had problems passing even today because I was suffering a lot in acceleration. We don't have the speed we'd like. In my opinion, my potential was to stay with Rins and Crutchlow, more or less. We all had that pace, only that I was too far behind on the grid, then I lost those positions at the beginning."

The start is increasingly important.

"The fact is that everyone starts very strong thanks to the launch control systems. We were able make more of a difference before. If you guessed a start, you could skip a whole row. Today, almost everyone starts the same, then they're all very well prepared to go to their maximum right from the first lap. In the last few qualifications, I didn't do really badly. I was always at least in the second row. Yesterday was instead a qualification that was a bit difficult. I had to do better. Even starting two positions up front could make the difference."

Next is Phillip Island, a track you love.

"Phillip Island is always nice, but also very tough. It's one of my favorite tracks. We'll have to see how we are. Now we'll look at the data to try to figure out how to get better there.

A day to forget, but your brother Luca made you smile today.

"Luca was fantastic today. I really loved it. I think it was his best win. He fought and passed Luthi after a good duel. Not everyone is capable of winning two in a row. They managed to find the key to the problem in the garage. Unfortunately, they did it a bit too late, but now he's going really strong and has to keep doing it from here to the end of the season. A great day for us. Even Vietti made the podium with a nice overtake on the last corner, so they were really good. The SKY VR46 Team performed well."

It seems that you'll soon be back on an F1, swapping your M1 with Hamilton's Mercedes.

"It's been a while that I've been wanting to do this with Hamilton. It's great. They're trying to organize a day when Lewis tries my M1 and I try his Mercedes. We hope to doi it. It could be a very cool thing, and getting back on an F1, even if only once, is great."

THE 2023 CALENDAR MotoAmerica, the American series, will have to do without Danilo Petrucci this year, who has decided to continue his career in...
22 hours 37 min ago

The FS-3 Racing Kawasaki team continues to focus on young riders in the British Superbike. With Rory Skinner in the Moto2 World Championship, 19-year...
2 days 17 hours ago

His wife posted about his condition: “He is okay and in the best place possible. They will keep him in for a few days to monitor him.”
3 days 2 hours ago