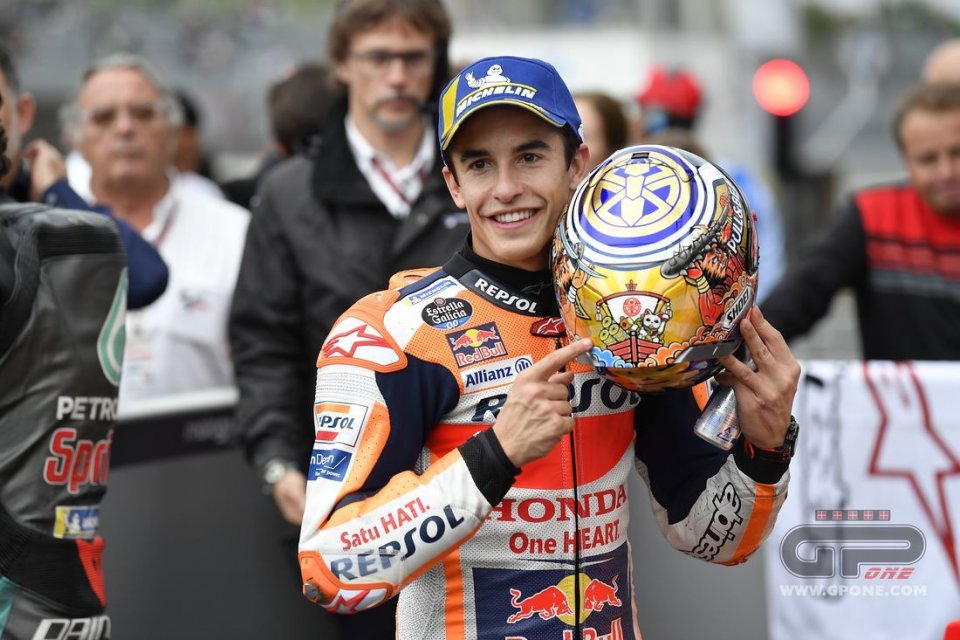 Motegi is Honda's track but, ironically, Marc Marquez hasn't yet managed to get a pole here. Just to make sure you don't miss anything, the Spanish rider has seen fit to update the statistics, displaying a flag with the #93.

There are 22 tracks to date where Magic Marc has managed to start in front of the group, confirming the potential of the marvel from Cervera.

"This was the only track where I had not yet gotten a pole and, among other things, I didn't even know it," Marc began. "Obviously, it wasn't a normal pole, per say, since the conditions were unique and there was no dry asphalt. I didn't reach a record time, but I'm excited about the result. Obviously, we'll have to work well for the warm up, since the conditions tomorrow could be completely different than today, so we'll have to be ready."

Marc then takes a step back and analyzes his Saturday.

"It was a difficult day for everyone, but it was especially difficult to understand the conditions of the track in the FP4. Then in qualifying, besides from two corners, it was dry, so we pushed hard. Like I said, it's nice getting a pole for the first time here. I'm happy about this, but we have to be honest and say that tomorrow will be a tough race. We're not in the best condition, but I'll still try to fight for a victory."

As anticipated, the warm up will be decisive.

"I consider it a crucial session, but I think the really important thing is to understand the temperature and humidity we'll be racing with. One tire worked very well in the FP1, while another did better in the FP2. We, therefore, need to do our best to understand the best tire to use according to the conditions. It'll be difficult for everyone, and it'll also be interesting to understand what the other riders will do."

Marc talks about his opponents.

"The two Yamahas will definitely be competitive, namely Vinales and Quartararo. I think we'll also have to see it out with Morbidelli. Dovizioso is also good on the race pace. I don't know why he's behind. This is one of his favorite tracks, and I'm convinced that he'll fight for the victory."

The marvel from Cervera didn't ignore his brother Alex's super rescue, where he prevented a highside.

"They always said that the younger brother becomes better than the older one," he said, jokingly. "His rescue was impressive. That kind of rescue doesn't always succeed and, fortunately, he managed to avoid the fall in a very important moment of the championship. He's concentrated. He wants to make it. He was lucky, but he was also good. I think he'll review in slow motion lots of times."

Marc is pressed on the matter.

"It was an incredible maneuver. We reacted to his maneuver in the pit-box as if it were a victory. Like I said, he made that great rescue, since he was really concentrated at that moment, and did better than I would have known how to. It's also true that luck is on his side, but it'll be more important if it is tomorrow. Unfortunately, I haven't been able to talk to him, but I will later."

Meanwhile, at Motegi, Marc brings yet another clock home as a prize from the Organizer for winning the pole.

"I've collected several these past years, and it's really nice. It's also true that I have many. In fact, I decided to give them to the whole team one year and gave them to relatives in another occasion. There's always someone you can please."