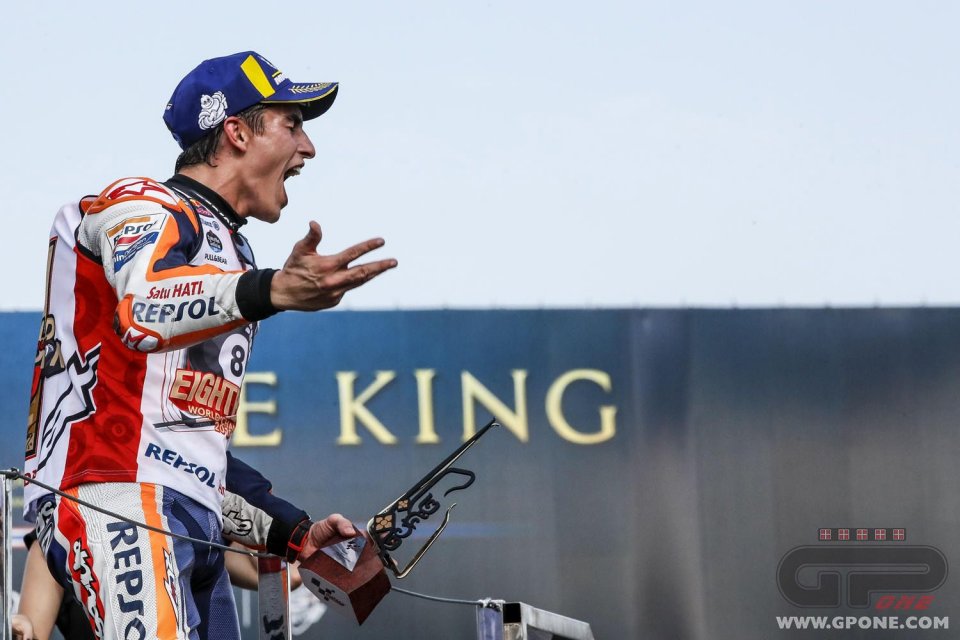 After celebrating his championship title in Thailand, Marc Marquez returned to Madrid to honour his achievement at Campus Repsol with a press conference that was livestreamed via the Spanish sponsor's social channels. The rider covered many topics, during a meeting that touched on all of the key moments of this triumphant season.

Marquez once again confirmed at Buriram that he has no intention of giving up now he's secured the title, determined to bring both the manufacturer's and team titles too. No easy feat, considering that Lorenzo and the other Honda riders are not contributing to the cause, and yet it's possible considering the domination we're seeing from the eight-time champ this year.

Marquez's path towards legendary status is well underway, the numbers reflecting his rise towards the pinnacle of motorcycling. Giacomo Agostini is still on the throne, with his 15 titles, so what does Marquez think about the possibility of matching that.

"I heard Giacomo talking on the radio and he thinks I can reach 15 title. To do so, I would practically have to double up on what I've already done and I think that's impossible. In reality, I don't like the word impossible, but I'd at least say that it's almost impossible. I don't think too much about these things, I follow my own path though of course reading my name alongside those of legends is something that gives me goosebumps, it's something I try to avoid. When I decide to retire, I will be very proud of what I've done throughout my career".

While Agostini is still far off, Valentino Rossi is just a step away At Buriram the Doctor referenced the controversial 2015 title.

"Yes, I'm catching him in terms of stats, but I like to live in the present and I've never been obsessed with numbers or records. i'm living my passion and the present, so for me the 2020 will be the same as ever, to win. Every era has its names, its champions. For now I'm still on eight title, then we'll see. His words? He publicly congratulated me saying I deserved the title and that's nice. I'd change many things if I could go back, like all my 2015 crashes, but in the end his words are the reaction of a rider who has done so much for motorcycling and who is still doing so much. I know how to evaluate things and what he's doing at his age is not something many of us could do".

The 2019 season saw Marc start out feeling the after-effects of a very difficult surgery, carried out in late 2018, which could have seen him experiencing long recovery times.

"When I had the surhegery, doctors told me I'd have to wait 4 months to be back in shape, but I wanted to do it in one month. I gave it my all, with my physical preparation too, and those around me helped me. I wanted to get to Qatar in the best possible condition and I think I did that. Hard work always pays off in life".

"The season was almost perfect because I remember the Austin crash for instance. From there, i tried to improve, move forward and, though it's difficult, I think I did it. I'm very proud of what I and the team have done this season anyway. One of my idols is Rafa Nadal and every time he goes out on the court he does something new. Leo Messi also sets himself goals and, once achieved, he immediately sets himself another, harder one. So yes, it's possible to improve further. Every time I've won a title, I've crashed in the following race, so that's my first challenge as champion".

Marc is also aware that he's become an iconic figure beyong sport, a potential example for youngsters who see his achievements.

"i feel increasingly mature, the years go by. Humans are the only animals who will make the same mistakes twice, and I've been guilty of that too, but I'm trying to learn. This is the year in which I've been most consistent. Knowing that young people look up to you is another responsibility, but I try to take it in my stride".

The Spaniard has dominated with the Honda, a bike that appears to underscore his talent while complicating matters for his fellow riders.

"Honda builds a bike, then the riders have to adapt. The positive thing is that all three of us on the factory make give the same feedback and have the same ideas as to the line to follow in terms of development. Then the technicians bring the solutions and the riders have to adapt. This is a sport where the rider still makes the difference, but I think there's a good 30% where the bike and team are fundamental. You have to be ready to work as a team".

The 2019 season has also seen the arrival of a rookie who appears to have the potential to beat Marc in a championship. Here's what the Spaniard thinks about Fabio Quartararo.

"We're talking about the revelation of the season. He scored pole at Jerez, was very close but lacking the experience to do in the race what he'd done in qualifying,. Then he started making life difficult for those looking to beat him in the race. I think he'll win a race before the season is out. I've won for now, but I'm sure he'll be one of the title contenders next season and I think Yamaha is well aware of this".

Having dominated in MotoGP, might the Spaniard be attracted by new challenges, such as the Dakar for instance?

"I like off-road riding and have talked about it with my closest friends but I know I'd hurt myself. You need a lot of experience there and also have to be fast, but we're not talking about a track. There's a map to follow, it's all very different. I like to try new things, I've tested an F1 and also the off-road version in the desert, but a test is one thing, a race is quite another. If I was going to do the Dakar, I wouldn't do it on a bike".