Disappointed but happy, Quartararo feeling a mixture of both emotions. Being beaten just a few metres from the finish line is not a good feeling, but on the other hand he can be proud that he was able to battle with the likes of Marquez. Particularly considering he's still a rookie. Fabio is progressing fast, his disappointment only a sign that his story is still to begin.

“An incredible race, I was able to maintain a much stronger pace than I had in practice” he begins..

The race was a little like that of Misano.

“i'm more disappointed this time, because I couldn't try back then but today I could. I was able to get closer to the limit. It was frustrating to see him in front of me, but I'm also pleased because I battled with the rider who's been the reference in MotoGP for years”.

You hoped you could get past him?

“At the final corner I had to try or I wouldn't have been able to sleep until Motegi. But I was up against an 8-time champion, I should be proud to have battled him to the end”.

What were you thinking in that moment?

“My brain was turned off, I'd never braked that hard at that corner, but I had to try, and if it went wrong I'd just run wide. With every race I get closer to him”.

And as for beating him?

Marquez has said that you'll be one of his main rivals next season, do you feel ready?

“Definitely more so than this season, as I'll know all the tracks and will give it a go. What Marc is doing is incredible but I'm getting there. My aim is to challenge him because I want to be world champion.”

As of this race, Yamaha has given you the extra 500 revs your engine was lacking, did you feel the difference?

“Rather than helping me over the flying lap, it helped me be more consistent in the race. We new Buriram would be a good track for Yamaha but I didn't expect it to be that good. But I had some problems. I struggled a little with turns 4 and 5, I used the hard front tyre but it was still a little soft for me and I took it to the limit”. 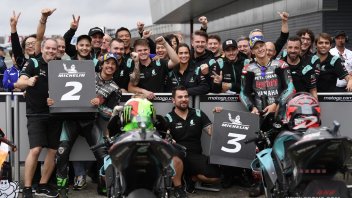