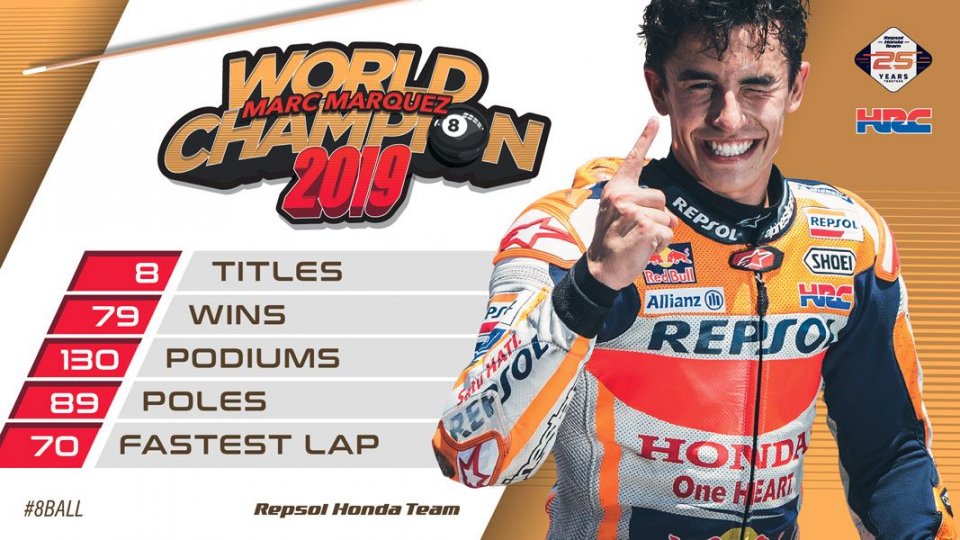 Magic Marquez, the Atomic Formula, the Cannibale, Joker, call him what you will but the substance doesn't change. There are talents, champions and riders who change history, Marc belongs to the last category. His revolution in MotoGP is one of repetitive wins and world records, circus numbers at close to 300 km/h, solitary wins, head to head battles and battles against the clock.

Today brought his eighth world title, his sixth in MotoGP, and yet it seems to be just the start for him. His favourite sport is to raise the bar. Again and again. To challenge his own limits even more than his actual rivals. He has seen it all, crashes and saves, mistakes and strokes of genius, and then so many wins. Because the numbers count for little, but at times they are only way to try and describe a champion for whom any adjective seems reductive.

A boy who has become a man very fast. He was almost a child when he debuted in 125, now he's going for the title of the best of all time. A story to which he has now adds yet another, wonderful chapter. 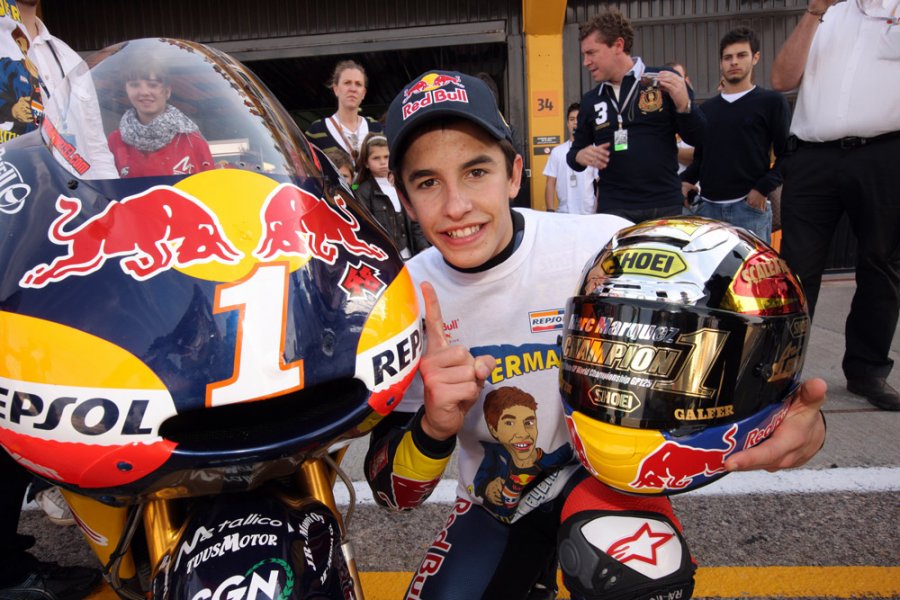 Just 17, but seems even younger. And yet there's nothing infantile in his gaze or the way he won the 125 title. Prior to that season, he'd never won a race, but then came five consecutive wins, from Mugello to the Sachsenring, followed by another four from Japan to Malaysia, Misano coming in between. And 12 pole positions, something what would become his trademark. Marquez the child already possesses all the characteristics of the champion he'll become. 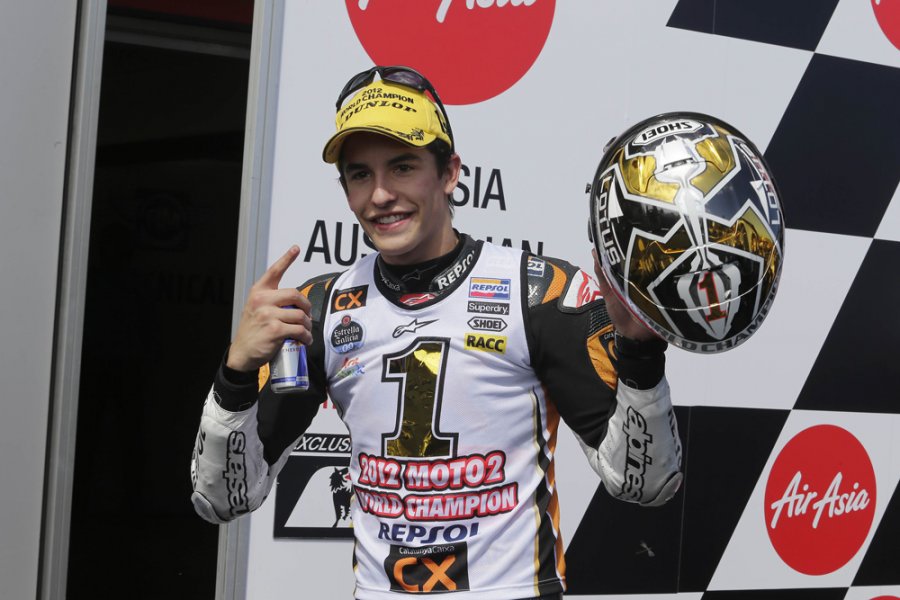 He could have won the Moto2 title already in his debut season, but he paid dearly for his impetuousness. After a bad crash in Malaysia, he suffered from double vision. There was a risk he'd stop racing but he came back stronger than ever. In 2012, he took what was his and, already champion, bade farewell to the intermediate class with a masterpiece, starting last on the grid at Valencia and winning his 9th race of the year. His destiny was written. 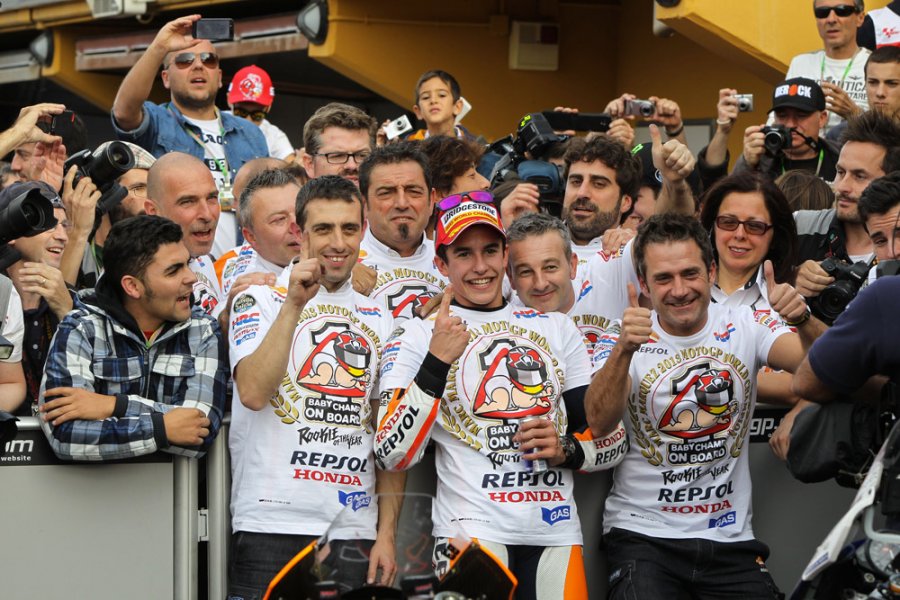 In order to have him on the Honda factory team, a change was made to the ruling, which stated that a rookie MotoGP rider must compete for a satellite time first. Marc climbed aboard the RC213V left vacant by Stoner and more than adequately filled his shoes. On the podium from race won, a winner of race 2, by the end of the season, he'd never done worse than third, while Pedrosa and Lorenzo ruled themselves out of the game. He celebrated with a shirt that represented a baby, but a grown-up one. 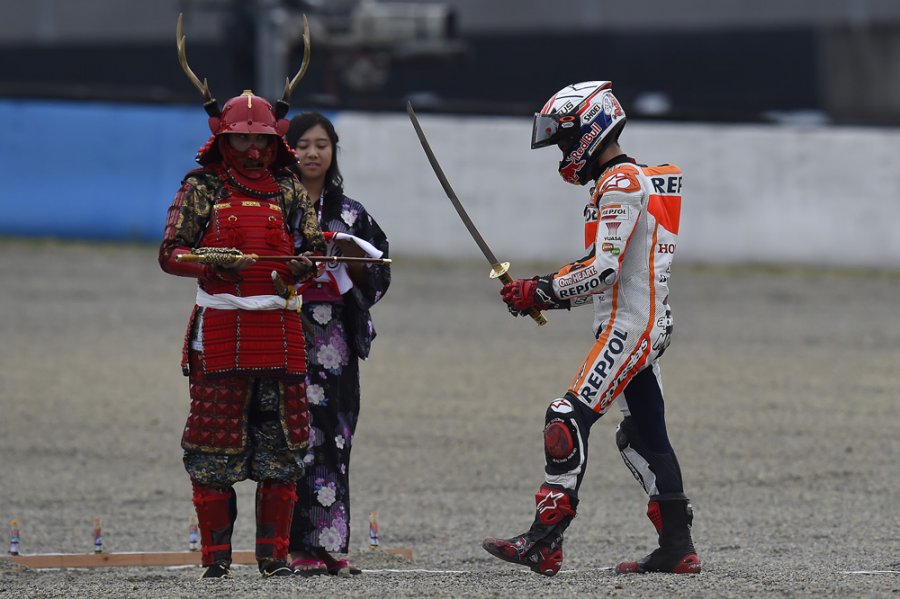 Ten consecutive wins, 13 in total out of 18 races, and the same number of pole positions. Marquez's numbers highlight his domination, unbeaten and unbeatable. He celebrated at Motegi with a samurai sword, and his rivals came out of the season gobbled up like piece s of sushi. Was this Marquez's best year? No, he still had room to improve. 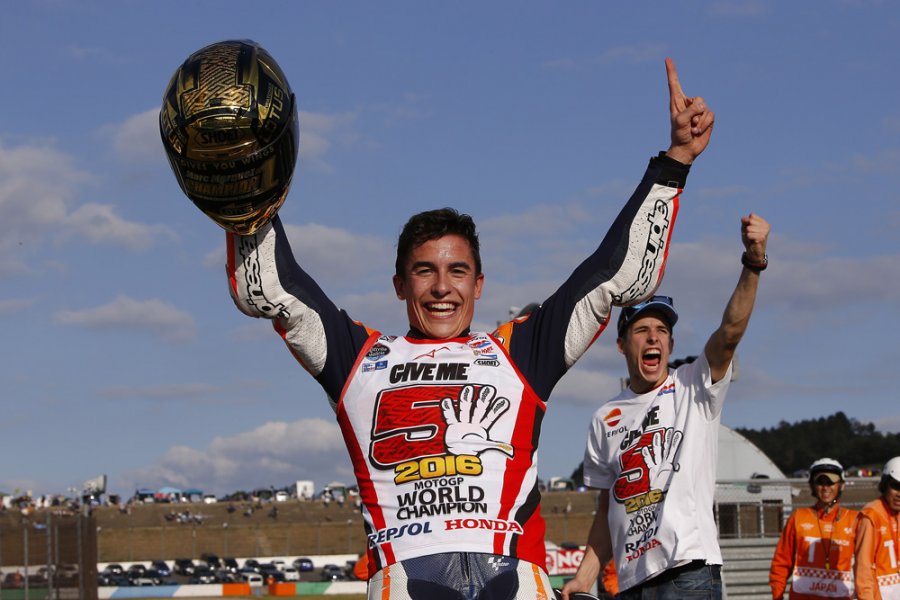 Marquez proves to have learned his lesson from the previous season, in which he alternated wins with (too many) crashes. The 2016 championship was the one he secured with the least number of wins ('only' five), as well as one retirement. The Spaniard begins to understand that power is nothing without control, he regroups and shows his rivals what this means. His transformation has begun and his rivals are in for an even tougher time. 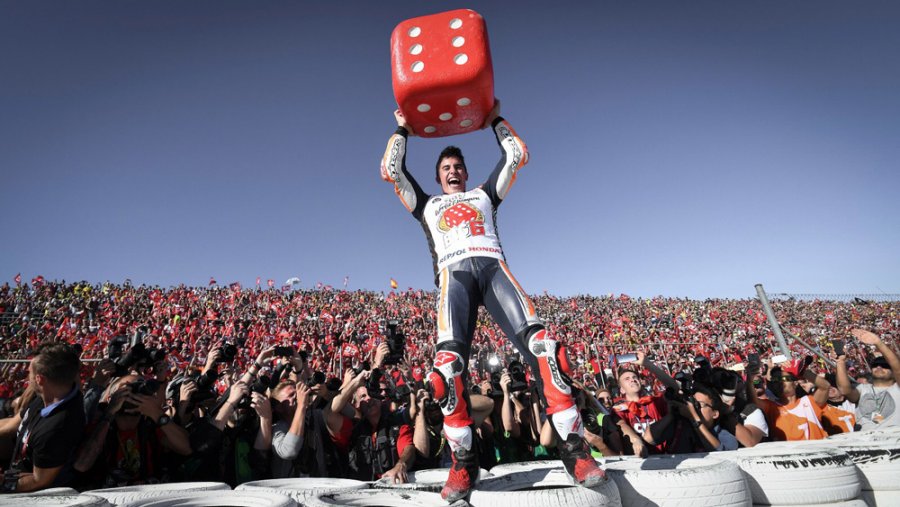 A new year and a new rival, in the shape of Andrea Dovizioso on the very fast Ducati. This is Marc's fourth title in the reigning class and, it goes without saying, he's the youngest rider in history to achieve this. Dovi does well to keep the championship alive as far as Valencia, but there's nothing he can ultimately do against Marquez. 2017 was a turnaround year and the Spaniard, losing his hair due to stress early on in the season, dealt with the tension in the only way he knew how, by enjoying his riding which, for Marc, meant winning. To celebrate he threw a dice that came out on 6, the maximum, as ever for him. 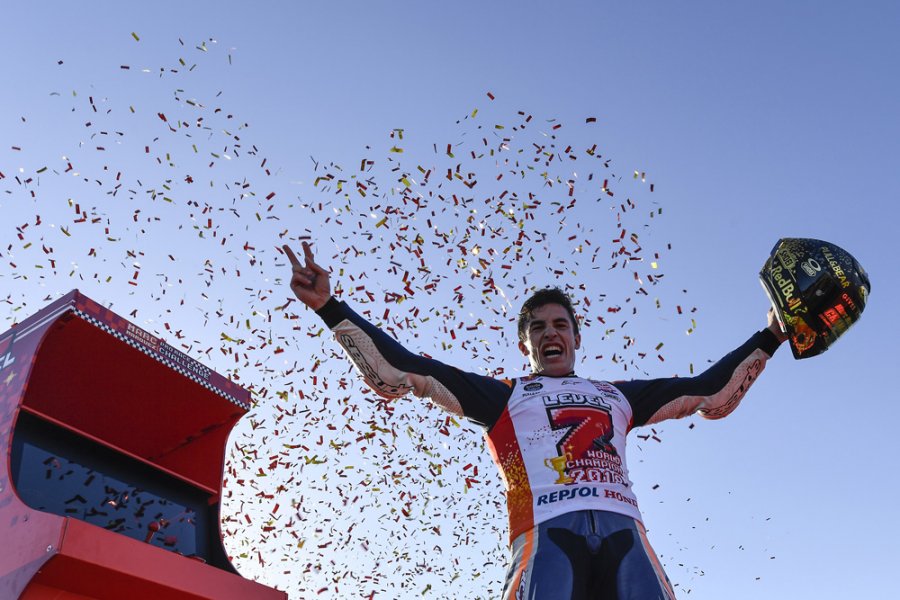 Marquez celebrated the title in Japan in front of a massive videogame. Like an electronic character, he had reached another level, honing his skills. He learned from Dovizioso, his rival the previous year, managing his race weekends more effectively. And although he didn't become an accountant, he did begin to combine instinct with logic. He secured the title three races ahead of time with a race win. Game over, for the others.

Only ever first or second, just one mistake as ran out front at one of his favourite tracks (Austin). It's hard to find one Marquez weakness this year, the Spaniard able to run away with victory at the more friendly track, and defy expectation at the trickier ones. The new Marc crashes less and is as one with his Honda, a bike no one else is able to ride. He is ruthless nd infallible, he is not scared and wins every bet. If perfection were to exist, it would have his name.