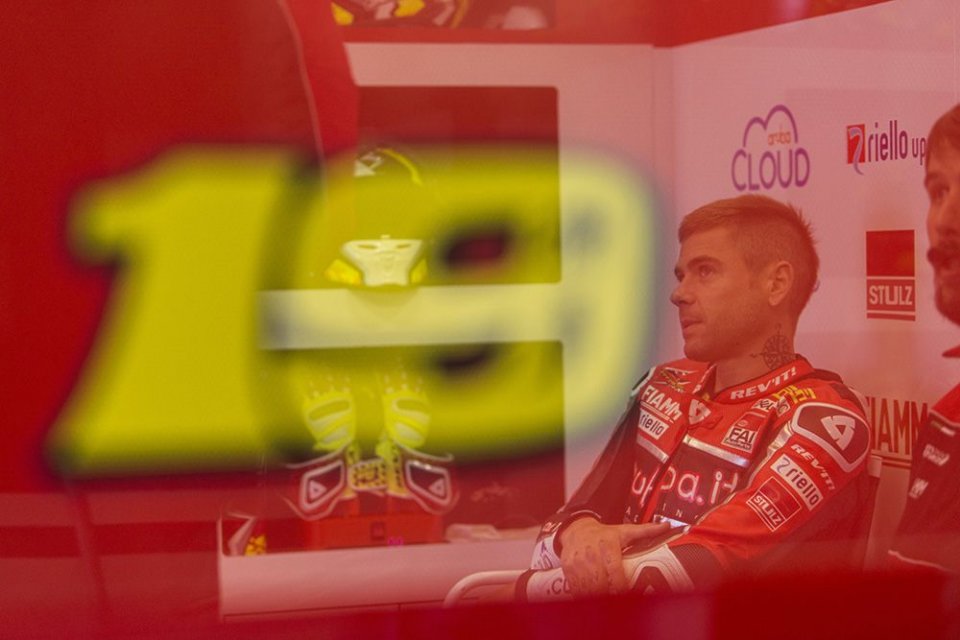 A 14th place in Superpole, a 5th in the race, and 100 points separate him from Rea in the standings: these are Bautista's numbers on Saturday at Magny-Cours. The Spanish rider wasn't very lucky for his first time on the French track, with crazy weather as a game-changer at each session. Certainly, even Alvaro's decision not to ride yesterday on the wet asphalt affected his qualifications. What is done is done, and its useless to cry over... spilled water.

"It wasn't a bad result," Alvaro tries seeing the glass half full. "The conditions changed many times during these days and, basically, I never found the ones we had in the race on this track. I started from behind, and I had never ridden on dry asphalt on this circuit, which was still wet in some parts. It wasn't an easy race. I tried to find references, then I kept going faster."

He also risked falling when he was struggling with Alex Lowes.

"When you push to the limit, and the bike isn't perfect, it happens. I braked a little late. Like I said, I had no references, and I had to figure out where my limit was during the race,” Alvaro states.

Even his Panigale V4R had set-up limits, out of necessity.

"I couldn't work to adapt the bike to this track ," he explains. "But now we have more data, and we can make changes tomorrow because I have to improve. Today we tried, and we wanted to see what would happen."

The result was a placement that, however, leaves a slightly bitter taste in his mouth.

"In the end, I'm happy with a 5th place because I was able to learn the track but, on the other hand, I'm not happy because Rea's disadvantage in the standings has increased." The outcome: I've tried to do my best, and I'll see if I can be faster tomorrow.”

Bautista understood what was wrong and where to intervene to be more competitive on Sunday.

"The biggest problems I had were in mid corner and in exiting. I couldn't get the bike to go where I wanted to," he says. "Normally, during free practice sessions, you test the set-up, but since I didn't do any, it was difficult to be ready for the race. It's going to be hard to resolve the understeering problem tomorrow because we've had it since the beginning of the year, but we'll definitely be able to improve the set-up."

The Panigale seems to have behave two ways on the wet asphalt, sometimes it's fast, while other times it plods along. Why?

“It's not easy for us on the wet asphalt, especially where there isn't much grip," Alvaro answers. "For example, I had ridden for the first time in the SBK at Misano with the rain. It took me a while to adapt but, at the end of the race, I was the fastest on the track. Instead, the situation at Donington was similar to what found here, with not much grip on the track, and we struggle because we couldn't push on the tires. I don't know if it's because of the bike, my riding style, or a combination of the two."