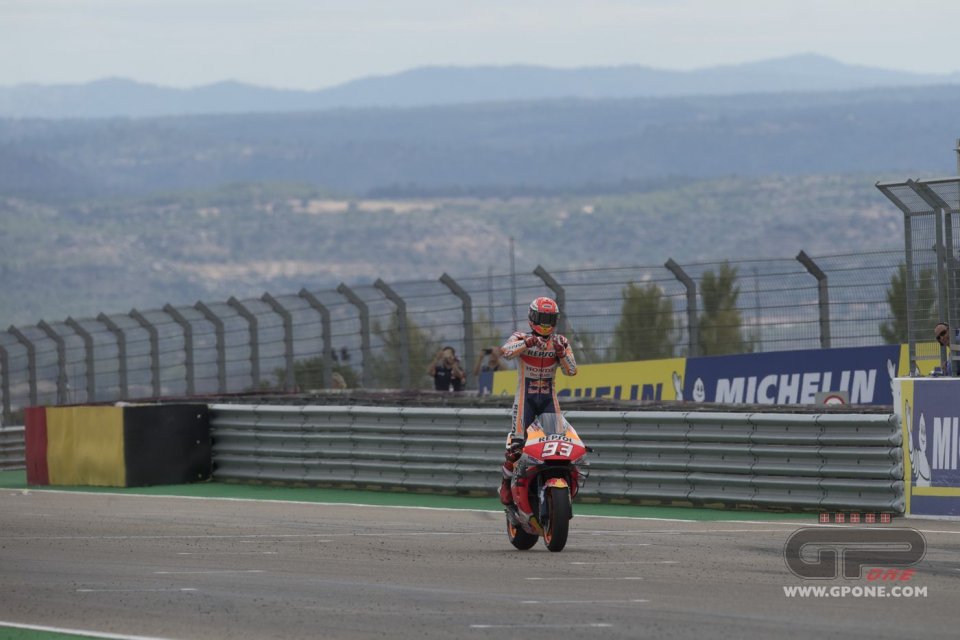 200 races, 78 wins, 89 pole positions. Marc Marquez leaves Aragon as ruler, ready to board the plane to Thailand where he will celebrate his eighth world title. There's little to be said about the performance of #93, the dominant figure at Motorland.

“Break away to victory could be the best title for this race. My strategy was to break away in the first two laps, not allowing anyone else to stick with me, and then manage my lead and win. I'd say it was a comfortable race”.

Magic Marc's power was clear right from Friday, when he closed day one a second and a half ahead of his rivals.

“Sometimes, joking with the team, I say that we could just do the warm-up and the race. At tracks like Aragon,  I can feel good right way and immediately reach the limit. I'd say we have a good base and are sorted”.

Marc then talks about the work of his team.

“My team is like a football team. There are many people, but one, or rather two captains: me and Santi Hernandez. It is us who map the path in order to be strong right from the start. Over the years, I've realised that at some tracks things come easily while at others it's more complicated, but we must always be ready”.

Over the weekend, Marc took care of every little detail, despite a small setback.

"The crash in free practice helped me to find greater confidence with the front tyre. I knew I had great race pace, and tried to push hard right from the off. I didn't need a big margin, just 3 or 4 seconds, to try and win. I knew it would be key if I could immediately gain a second over the chasing pack".

Rather than winning, #93 is focusing on another aspect.

"My aim is not to win many races, but to try and be consistent. Petrucci, who has scored one win, lies fourth in the championship and this is significant in my opinion. Aragon isn't an easy track for tyhe Honda, as there are two long straights which could have been a problem. In the end, the Honda behaved well, though it's impossible to have a perfect bike that is 100% at every track”.

Aragon was the setting for Magic Marc's umpteenth win.

“Over the months, we've been able to improve the bike in various ways, I have to say the current Honda lets me run this kind of race. Personally, I feel stronger and more complete with respect to 2014, as I thought I was invincible that season. Now I think that I'm more focused and able to adapt to different situations”.

During the post-race conference, Marc didn't miss the Moto2 race, in which brother Alex finished third.

"Of course we do all we can to help him, while also trying to limit the pressure he feels. The important thing is that he remains calm and focused on the goal”.

Marc found himself back on the podium with Dovizioso at Motorland.

“In 2017 I made a list of contenders, and Dovizioso's name was not on it, but then he was my main rival. In the end, championships are like that, you start with various names and then things get mixed up."

Now it's all eyes on Buriram.

“I'm going to Buriram to win the race, the aim I set myself every weekend in fact. Of course we need to see how competitive Dovizioso and the Yamahas are, as I had to fight to the final corner last year. Buriram presents a first match point, and if I win I can face the remaining races more calmly".