Useless denying it. It was a really difficult weekend for Ducati, and it would have been disastrous if Andrea Dovizioso hadn't cobbled something together, closing today's race with a 6th place (and a good pace). All this, however, is not enough, since this performance took place on a track where Ducati had won with Dovizioso last year and with a good margin over Marquez.

"I tried until the end," Dovizioso said. "After overtaking Espargarò, I thought I could catch up with Rossi and Morbidelli, but they were way ahead. I was in good shape today. I was really intense, but I didn't ride very well. I got very close because Valentino was about to fall, but I did a good job over the weekend, since the gap at the start was huge. We had seen that during the tests. I wouldn't have expected to do better today in the race. I could have finished fourth, but we were all in a predicament. I couldn't risk overtaking."

So there were evident problems from the start, especially with regard to grip in extreme cornering. Did you have to ride trying to avoid this?

"Not avoid it because that would have been impossible. Let's say I tried to control it, " Dovi said. "I rode trying to be as relaxed as possible. The asphalt this weekend required a riding style that is usually not required. This bike isn't used to that. I worked a lot on my riding, looking also at the images of the other Ducati riders. Our work has paid off a lot. With last year's asphalt, I would've been competitive, but I don't know if I could have won. Today I struggled a lot with the front, and you could tell from all the falls that there were problems with the grip."

It seemed like Ducati was a bit behind when it comes to development. Is that true?

"Not really. They're working hard in Borgo Panigale, but it's not easy to bring new pieces, in order to further improve. It seems like Suzuki has improved a lot but that's because it had a gap to fill. Evolution is now pushed to the limit."

At the end of the season, now that the championship is coming to a close, will you test new things for 2020?

"I hope so. I have no problem doing this kind of work, and I'd be happy to have something new, since we're looking at who's behind us in the standings, not who we have in front of us. I don't even see Marquez anymore. It's useless to think of filling the gap with Marc if we come up behind in every race."

Petrucci's tenth position today is the natural end to a difficult weekend for your teammate. What should Danilo do?

"Everyone has their own way of riding," continued Dovizioso. "Danilo is in trouble because he's riding on tracks these weekends where his way of riding doesn't work. Now he must try to adapt as much as possible. It takes experience to do so."

Next stop Aragon. You'll be on the track again in just 5 days for free practice sessions. What are your expectations?

"Last year, I fought till the end. This year, my rivals have improved and are more competitive. The favorites change with every race. At Silverstone, for example, I had started off really badly, but then I kept improving with each round, and I would have had the chance to fight for the victory. Each weekend has its own story, and the work carried out could be a game-changer. The grip and temperatures really make the difference." 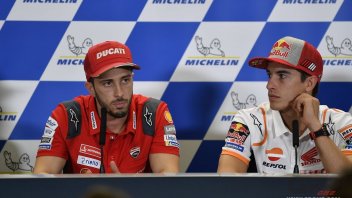