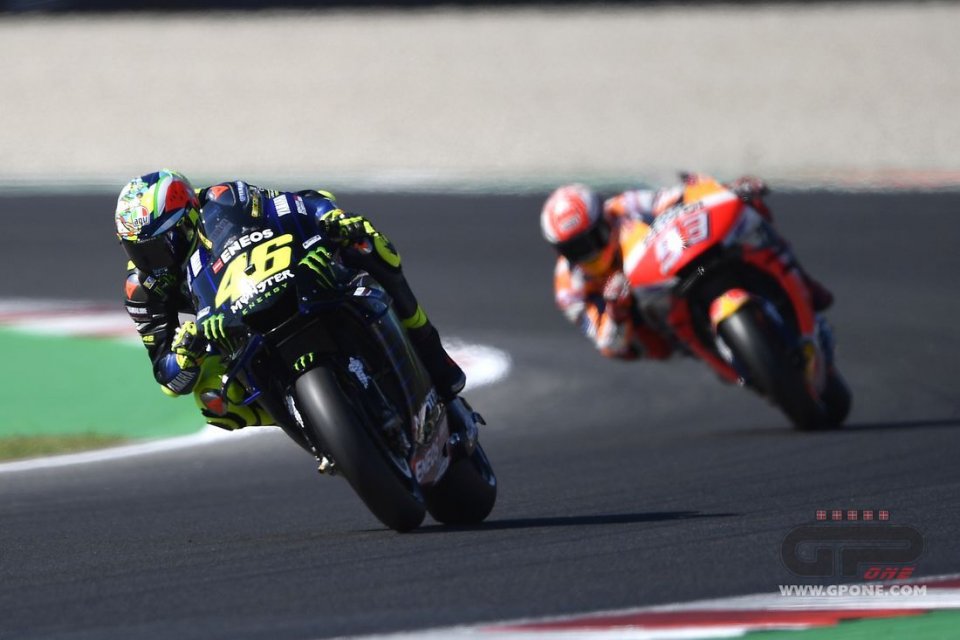 Neither of them will start from the front row tomorrow at Misano, but Rossi and Marquez were the stars in qualifying, but in a negative way this time. Everything happened during the last lap, beginning with Marc in Valentino's wake. The Spanish rider was setting records in the first two sectors, while the Italian was not improving. At the Curvone, Marc got to grips with the problem and overtook Valentino, but then went wide and off track. The deed was then done at the Carro. The Doctor arrived long and planted himself in center curve, with Marquez risking contact.

"What happened? Simple. Marquez overtook me at the Curvone, knowing that he would ruin my lap. Then he ruined my last chances at the Carro, returning to his trajectory instead of slowing down, after having gone off the track when I overtook him," Rossi said, defending himself.

In these cases, the Sepang race in 2015 immediately comes to mind, ending with Marquez's fall.

"And why not the 2017 Argentinian Grand Prix, when he knocked me out shamelessly?" Valentino remembers the previous incident with a devilish smile. "I don't think we're back at that point. He just overtook me knowing he was ruining my lap. And if we start talking about 2015, that should bother him more than me. I feel bad because, besides this episode, I was hoping I'd be faster in qualifying."

Let's talk about that so-to-speak problem with Marquez, Rossi started. "I was at my second tire, and I was trying to give it my all. Marc overtook me at the Curvone and made me waste time, but then he went off track. His wheels touched the painted green asphalt. So I tried to stay close to overtake him at the Carro, also because I was expecting him to slow down after he went off track, but he instead remained on his trajectory, and I came wide. I tried with all my might. It was my last chance, but I remained 7th."

Marquez claimed that he didn't understand Rossi's maneuver. That's not the speed at which you take a corner.

"Actually, after I went wide, he blocked me again, to ruin even my last chance to improve ," replied Valentino. "Then he gestured with his hand, but I didn't understand why. At that point, I didn't even care that much."

Marc also said that it was Valentino waiting for him in the previous round and not the other way around.

Another point: Valentino went off the track when exiting Turn 6.

"That's true, but I found out later," he admitted. "I went off track on the edge of the curb, but I only found out in the garage that I touched the green. I kept pushing because it was my last chance, and I thought I was on the track."

Meanwhile, the Stewards Panel decided to summon both riders.

"I'll tell them the same things I told you," Valentino said. I don't think there's a reason for a penalty."

Once the meeting is over, he can think about the race.

"It's really too bad because I was able to keep a good pace in the FP4, and I expected to be fast even in qualifying, so I could have had the potential of being in the top 5, but I had more problems with the soft tire," he said. "It didn't go that bad in the first lap but, in the second half of the track, I found traffic. Starting 7th, from the third row, will make everything complicated. But I have a good pace, and I'll try to give it my all."