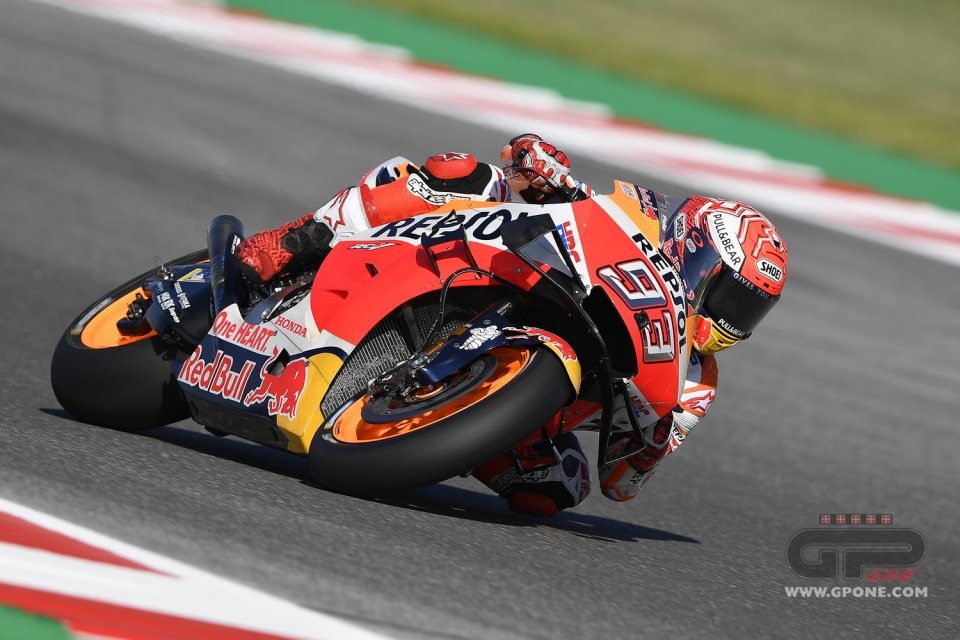 There are few certainties in life, but one of these is Marc Marquez up at the sharp end. Also on Friday at Misano, the Spaniard third and the only Honda (or non-Yamaha) inside the top five.

“As of Brno, the Yamahas have been fast but then they suffer come Sunday. They were fast in testing here at Misano, they have strong points but also some weak points. In any case, the important thing is that we are up there with them, sometimes its Ducatis, other times Yamahas, but all that matters is that we're also in the mix”.

Marc remains up front despite his Friday having been very work-orientated.

“I started the morning with a pair of medium tyres, before switching to the hard front and soft rear in the afternoon. At the end I put in the used medium at the front to understand certain things. Sometimes you have to forget about lap times and focus on the work in order to find the right way”.

Speaking of work, Marc has tested two frames during the last races, deciding to embrace the present rather than the future.

“At Silverstone we worked with the current frame, while from Germany to Austria we alternated that with the new, which has positives but also negatives. This is why we're focusing on our current base for now, as we want to score points. Sometimes it's better to stick with what you know best”.

The 2020 prototype is also on hand at Misano, but Marc only rode it for a few laps.

“I only made one exit with the 2020 prototype to check everything was ok. You're always looking for a bike that is a compromise between many things, but only in Valencia can you test the real prototype for the coming season."

Back to today, and Marc almost came into contact with Rins during FP1, before following him for a while.

“I was coming up fast and wanted to pass him, but the Suzuki is able to brake very late so to avoid contact I ran wide, playing safe as there was no point taking a risk. Following the other bikes? I don't go with that intention but if it happens it can be useful and tell you something about the other bikes' characteristics”.

In conclusion, Marc says his piece re the future rotation between the four Spanish races and one Portuguese, which will come in as of 2022, as well as touching on the 50th anniversary of Nieto's first title win.

"As a rider I can say it's a pleasure to run as many races as possible in Spani but I'm aware that Dorna wants to expand the market. I would race at a track for its beauty and not its location, but I understand the commercial mentality of the organiser. Nieto paved the way for many riders like Criville and Pons. Spanish motorcycling grew thanks to him”.

VIDEO - The two brothers will wear special graphics to show their solidarity at this time. Helmets, gloves and boots will then be auctioned off for...
18 hours 25 min ago

The Dutchman: "In the afternoon I had some problems with front end confidence"; Razgatlioglu: "Too many things to try confused me; my head is...
1 day 6 hours ago

The Circuit of the Americas has made it official: no US race for this year
1 day 8 hours ago

The young rider was transferred to a ward at the Meyer hospital in Florence. She fractured her pelvis at Mugello during the first CIV test but will...
2 days 17 hours ago

Upon authorization, highly skilled sportsmen and workers will be allowed to cross borders
3 days 13 hours ago