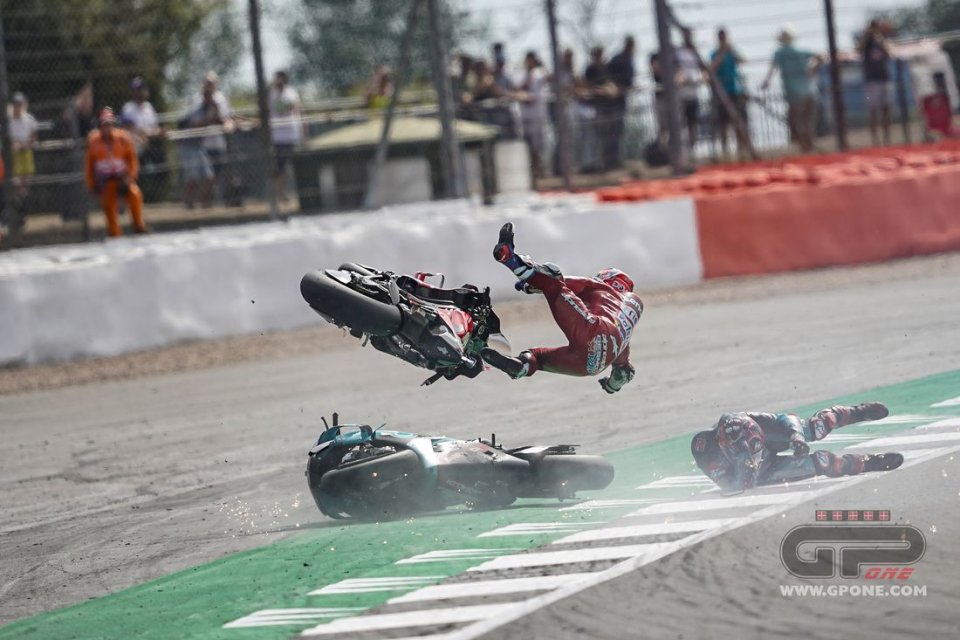 In retrospect, the accident that Quartararo and Dovizioso were in at Silverstone can be defined as spectacular. We can use this adjective because, besides several bruises, the two riders were able to get by with only a scare.

Until a few years ago, such a dynamic could have caused serious injuries, but safety has taken great strides in the MotoGP. We're not just talking about circuits (with large enough ride-off areas and airfences on the barriers) but also protective clothing. In this sense, the airbag inserted in the suits was a real revolution and, rightly so, the regulation makes it mandatory.

Andrea and Fabio are both equipped with the Alpinestars Tech-Air system, and the Italian company has published the impact data of the two riders.

As for Quartararo, who was thrown in the air after his Yamaha took a violent nosedive, the airbag inflated completely 60 thousandths of a second before the French rider hit the tarmac. This means that the system was able to absorb the impact. His entire fall lasted 4.7 seconds. This may seem short, but it's actually very long when you're rolling on the tarmac. The corners indicating lateral acceleration show how violent the impact was.

The corners indicating lateral acceleration show how violent the impact was.

As for Dovizioso, the airbag inflated entirely 145 thousandths before he impacted with the ground. However, there is other data regarding how much this technology has evolved: the Tech-Air, in fact, did not activate when Quartararo's bike crashed into the Ducati, throwing Andrea off his seat, but only when the rider was thrown into the air. The algorithms that decide how the airbag operates are, therefore, very sophisticated and understand exactly the right moment to activate the system.

And the riders are thankful for this.