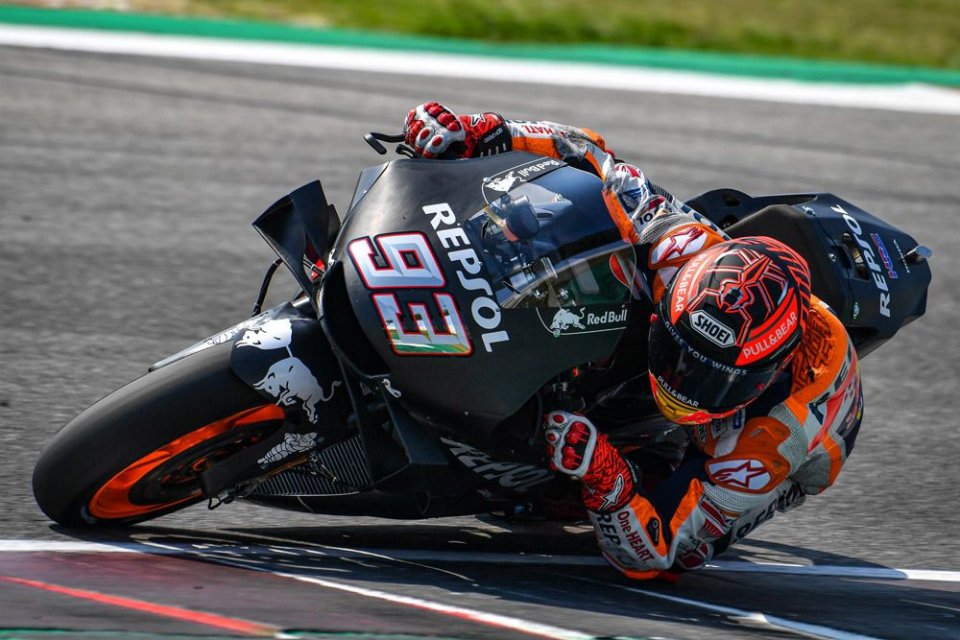 "2019 is almost over, 2020 has already begun," is what Marc stated during the Misano tests, and whoever might read this statement as a threat is not entirely wrong. The 8th world title is now a formality to meet in Thailand, or at the latest, in Motegi, and the atomic ant has been able to afford himself the luxury of being a test rider for two days, not worrying too much about what will happen in the next GP in San Marino.

Marc got rid of the extra-soft tire (a test tire used by Michelin only to evaluate the grip offered by the track), leaving to others the ephemeral glory of being the fastest during the tests. He had everything he needed in the pit-boxes: 4 different motorcycles, in order to figure out what path to follow next year.

If Marquez shows his stuff on the track, Honda does it in the racing department, presenting new innovations all year round. While the other manufacturers struggled to understand how to stop Cervera the cannibal, the Japanese were already looking towards the future by following their beacon.

"What are the objectives for the new bike? To make it faster and easier. " And maybe the second adjective is a little dig at Lorenzo. It's the rider from Mallorca, supported by Crutchlow, who wants a RC213V that's less for extraterrestrials, but they seem not to hear him in Tokyo.

"Marquez is our priority for development," the HRC technical director, Takeo Yokohama, had made that clear in Brno. Those weren't just words but facts. After all, it's difficult to think otherwise when you have a rider who has won 5 world titles in 6 years since he got on his bike and is about to put his 7th away.

One can argue that he's the only one who rides the Honda, but it doesn't seem to be a problem for the big bosses at HRC. Looking at the results of the other Honda riders, the RC213V probably isn't the best MotoGP ever, but it's the best for Marquez. And that's enough.

Marc is not only an extraordinarily talented rider, but he's also a hard worker. He prepares every move both on and off the track, and now he's focused on next year.

Lorenzo hoped to do in Honda what he had already experienced with Ducati: offer his experience, his sensibility, to be able to design a different bike. Not just for him, but for all the riders. Perhaps a bit naively, he hadn't come to terms with Marc. Then problems in adapting and his injuries did the rest. Now he's practically cut off from developing the new bike.

Jorge was only able to complete a half day of tests in Misano before surrendering to the pain caused by his back injury.

Marquez, meanwhile, rode one lap after the other, jumping from one bike to the next. Some looked like two-wheeled Frankesteins, with different parts assembled together.

Marc stacked up kilometers and offered suggestions to the engineers, but he didn't say much in front of the mics. "I can't give you many details." With everything he tried out, he probably could have talked a whole day long.

He definitely returned to Spain to enjoy a few well-deserved days of rest and relaxation with a smile on his lips. However, Yamaha has not yet managed to convince its riders with the evolution of the M1, Ducati has not yet presented a true prototype of the GP20, but Honda is already far ahead with its homework.

2020 hasn't started yet, but we can easily play at being fortune-tellers: Marquez will still be the favorite and will have a bike created in his image and likeness.

VIDEO - The two brothers will wear special graphics to show their solidarity at this time. Helmets, gloves and boots will then be auctioned off for...
10 hours 42 min ago

The Dutchman: "In the afternoon I had some problems with front end confidence"; Razgatlioglu: "Too many things to try confused me; my head is...
22 hours 16 min ago

The Circuit of the Americas has made it official: no US race for this year
1 day 52 min ago

The young rider was transferred to a ward at the Meyer hospital in Florence. She fractured her pelvis at Mugello during the first CIV test but will...
2 days 10 hours ago

Upon authorization, highly skilled sportsmen and workers will be allowed to cross borders
3 days 5 hours ago