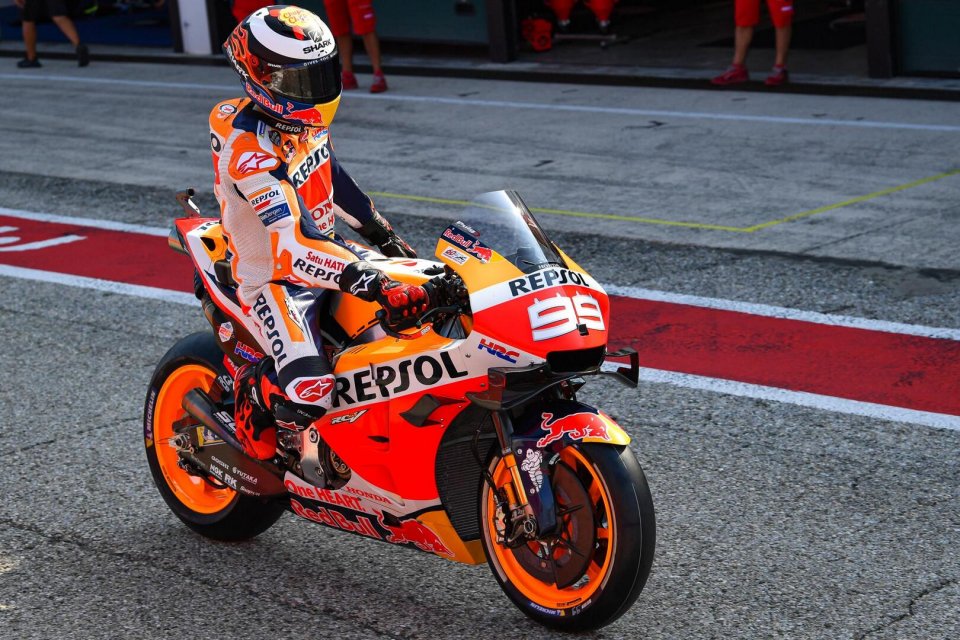 Jorge Lorenzo's ordeal doesn't seem to end. The Spanish rider was stoic at Silverstone, finishing the race despite the pain and, from there, the road seemed all downhill. But it wasn't because Jorge's two-day test in Misano was interrupted after just one morning. In fact, when he had completed 31 laps in the morning, n.99 decided to stop because of the pain, having to raise the white flag.

"Unfortunately, I have back pain. After the exertion during the race at Silverstone, I suffered a lot. The situation improved on Monday and Tuesday," he explained. "But I came here in pain. In fact, I struggle on the bike, so I decided to interrupt the test and prepare myself better for the race."

The situation is more serious than it seemed. The pain compared to how he felt at Silverstone seems to have increased, thanks to the exertion.

"I feel worse than I did in Silverstone right now. The race definitely inflamed my injury," he admitted. "And the pain has increased. I need time to recover and be ready for Misano."

However, he had time to work a bit, and Jorge gave a thumbs up to the new frame.

"I tried the new frame again (ed. the 2019 version). I liked it more than the old one, so I think we'll start with this on both bikes in the next race."

The Yamaha rider is at 51 wins in the stars and stripes top class. Nothing doing for his opponents. Jake Gagne, Mathew Scholtz, and Bobby Fong also...
2 days 5 hours ago

Thanks to the retirement of the leader of the classification Glenn Irwin in Race 2, the championship now sees four riders enclosed in only 12 points...
3 days 4 hours ago

Our popular “Frankie” confessed to being a victim of the degenerative disease, but he hasn’t given up: “The human body is like a motorcycle, if it...
4 days 1 hour ago

At Oulton Park the Australian took his second career victory. Nothing doing for Iddon, after leading the race for a long time. 5th championship...
4 days 5 hours ago

Jack: "I set my time thanks to Rossi and Bagnaia. Everyone will have tyre management in a corner of their brains". Fabio: "I'll try not to make a...
4 days 15 hours ago

Dominique Aegerter took his second win of the season overtaking the man from Rimini on the last lap, Ferrari finished in third place for having gone...
4 days 20 hours ago

“I tried to get more grip on the rear and didn’t succeed. It’s useless to waste time. I’ll focus on the front to brake like Ducati, Honda, and Suzuki...
5 days 6 hours ago