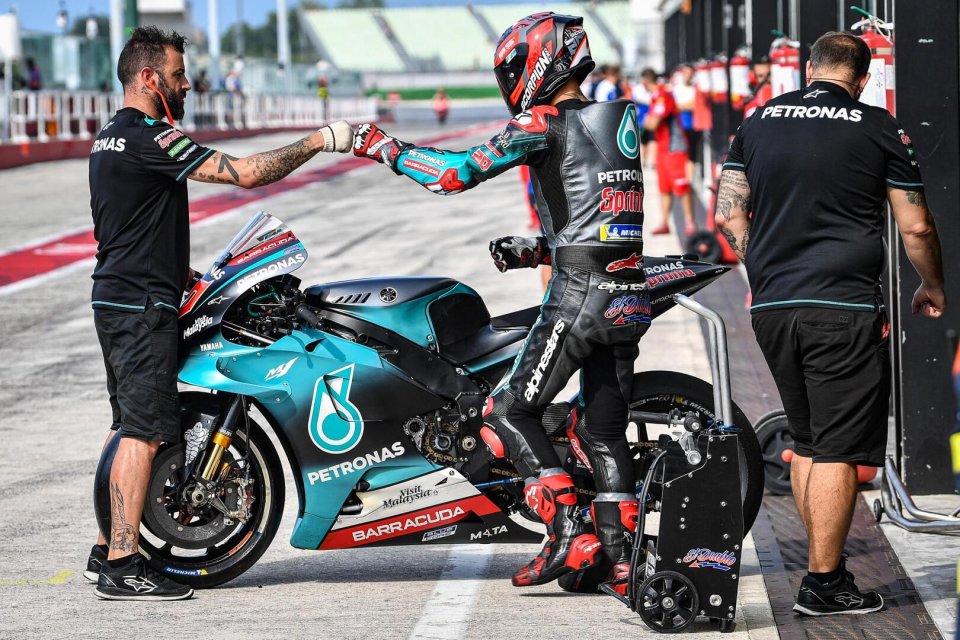 Falling violently on Sunday and being first in the tests on Thursday is not something for everyone, but Fabio Quartararo is among the few who can do it. In fact, after the Silverstone accident, the French rider got back on his bike on a track where he had never driven a MotoGP and, despite this, no one was able to do better than he did.

"It was a positive day," he started, "and a long one, since I did more than a hundred laps. I didn't try any new component, except for a front wheel. I thought, first and foremost, about becoming familiar with the track because it's new to me and, in the meantime, I worked on the set-up and electronics. From what I saw today, it seems to already have a good pace on this track."

N.20 reassures us about his physical condition, after having already partially solved his doubts on the track. "My neck hurt a bit after the race on Sunday, but the most important thing is that my headache is gone and, in general, I feel good."

Fabio was fast despite the poor grip on the track, which the Petronas team rider partly blames.

"There wasn't much grip, also seeing all the falls, especially on Turn 14, where I also risked it. I'll have to be careful for the Grand Prix, even if, lap after lap, the situation improved thanks to the tires. But we have to study Turn 14 because there isn't much grip, and it's really easy to make mistakes."

On this first day of tests, the entire Malaysian team was able to smile, since Franco Morbidelli was behind Quartararo. The Italian rider showed his muscles at home, being quick on both pace and time attack.

“I'm happy with today. I had a lot of time to work on the set-up, and I'm satisfied with both the pace and the single lap. The latter  especially satisfies me because I've often  not been strong in the  time attack, while I  came very close to Fabio today."

N.21 has almost never been so close to the French rider in the last races, but something seems to have changed here in Misano.

"I was hoping to be close to Fabio. I know I have chronic problems that I've been having for several races but, in this test, I took a step forward, finding and improving my weak point. I was hoping to be fast because when you can do what you want to on the bike, you achieve the times."

As for the others, Franco's only problem of the day was Turn 14, where he slipped. "Turn 14 was very insidious today, but it was for everyone, so we just have to be careful. The reason? I really have no idea. Maybe the salt (ed. he laughed)."