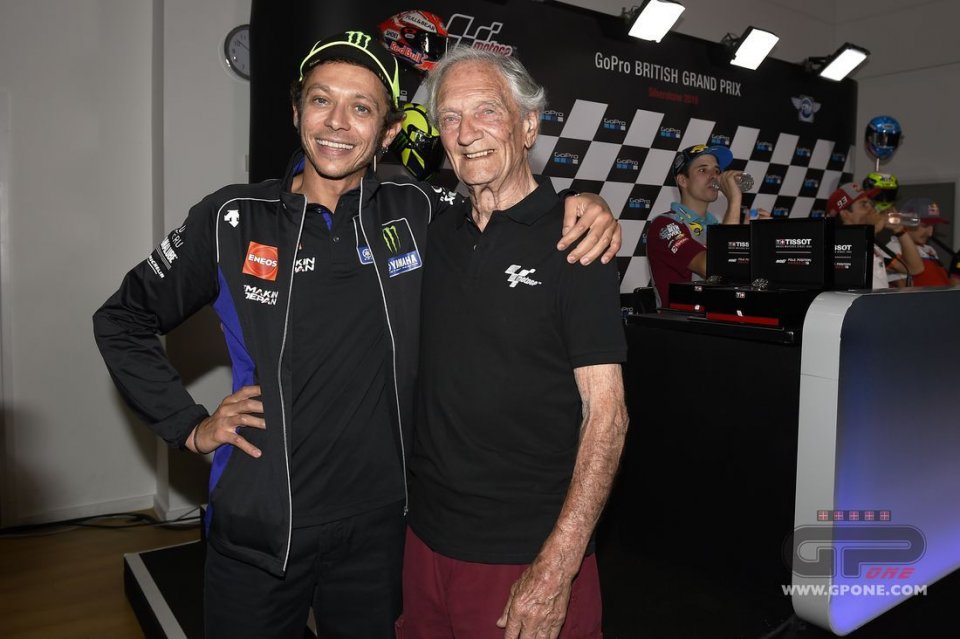 A motorcycle legend rewarded the poleman at Silverstone: Jim Redman, who continued to race till he was 85 years old. "Did you say 85? Well, that means I still have time," Valentino smiled. At 40, he got the satisfaction of placing himself in the front row - a result he hasn't seen since the GP in Austin - in the midst of lackluster races and a confidence in his Yamaha that seemed to have disappeared.

"About time!" Rossi celebrates his 2nd place on the grid. "I'm really happy, and I think it's the greatest front row for me in the last few years."

Did it arrive at the right time?
“Half-way through this championship, I thought I'd be strong. There were races like Mugello and Assen that I like a lot. Instead, I was slow. The other Yamahas were competitive. Vinales won in the Netherlands, and Quartararo was always fast. I wasn't."

Today you were in front of both...
"I only felt this competitive in Austin. I'll have to be ready for everything tomorrow, from the very start. I'd like to fight for the podium, or at least get close to it."

Were you depressed before the summer break?
"I was really sad. I came to the races optimistic, but I couldn't ride, while Maverick and Fabio were going strong. Like I said, from Brno onward, I found my bike again, and I gradually improved. At my age, if you don't have fun in the race, or if you're not competitive, everything becomes a burden."

There's talk about your retirement...
"Not today, so I have more free time to think about something else ," he laughed. "At my age, it takes just three bad races to hear them tell you you're old and that it's time to stay home. That's why I'm even happier now. I know I can still be competitive. But tomorrow will be the important day."

How do you continue to find your motivation?
"It depends a lot the sensations you have on the bike. Like I said before, during the part of the season where there were some of my favorite tracks, I got a little lost. Just look at what's happening to Lorenzo. If you're not at your best in today's MotoGP, you'll end up 18th, not 7th."

Why this transformation at Silverstone?
"First of all, my team and I had problems with the bike set-up. We made some big changes in Brno because I wasn0't able to be incisive when braking and entering corners, which are usually two of my strengths."

And then?
"Yamaha started working intelligently on things I had been asking for two and a half years, acceleration and tire wear, but I never got an answer. The situation has changed in the past two months. We can improve, both in view of the next races and for next year."

So this is all work in view of 2020?
"Wait. First there's tomorrow's race, then Misano, and there are still many other GPs, and also a 3rd place in the championship, which is not too far away. Then we'll ,think about next year because we still have to improve. The gap between Marquez and Dovizioso is still big. We get 7 or 8 seconds per race and our maximum speed is at least 10 km/h lower than the others. We have to start by decreasing this gap by half."

Is winning a possibility tomorrow?
"Who knows. I see a long list of riders who can fight for the podium. On paper, Marquez and Quartararo are the fastest. I'd like to keep up with them, have a good race like in 2017."

Two years ago, you started from a second position, behind Marquez, like tomorrow.
"True, and I did many laps in front. I think 17. But I then started having problems with the tires, and Dovizioso and Vinales were faster. It's difficult to think of a strategy right now. You only have some sort of idea on Saturday. What's important is what will happen in the race, and the sensations that I'll have on the bike.”

Is trying to stop Marquez an option?
"To succeed, you have to be very, very fast. Unfortunately, we also suffer in maximum speed, and this often makes it difficult to overtake someone. Maybe a group race will come out of it. With who? Marquez, Quartararo, Vinales, Rins, Dovizioso, Crutchlow, and Miller all have a good pace. I told you the list was long."

But this time, Valentino is also on the list.