There is no better way to silence market rumors than to be fast on the track, and Jack Miller learned this lesson. After two weeks during which his place in Team Pramac seemed to falter, the Australian rider conquered a really great third spot on the grid, despite a small technical problem in the FP3 that put his first bike out of action.

"There was a bit of tension in the FP3. I didn't feel comfortable with either of the tires, hard or medium. As soon as I mounted the soft tires, I immediately felt better but, unfortunately, I had a problem on the first lap and ended up in the gravel. The road to the pit-box was long," he said. "But I thank the marshalls who set a track record to bring me and the bike back to the pit-box. What happened to the bike? I know, but I can't say."

In qualifying, Jack then used the second bike, which didn't betray him.

"I was fine, despite having an old frame, which I hadn't tested since the Brno tests. In the FP4, I couldn't do all the laps I wanted because I had to get the tires to the right temperature. In qualifying, I saw that Marc wanted the pole, and I knew that, if I could keep up with him, I'd have gotten the front row, and that's what happened."

The new Silverstone asphalt was good for many, including n.43.

"Not having holes helped me a lot. My teeth were chattering at every turn in the first sector last year," he laughed. "Also, the new Ducati is very good here, especially in long corners where I can accelerate well without losing grip."

The ingredients for a good race are all there, but Miller knows he can't make mistakes.

"Being in the front row is great, but qualifying is something else. I was ahead even in Austria, but it didn't go well. So here I have to have a good race here. The tires? I used the hard both yesterday and today, and I liked it. It's not my favorite, but it's suitable for this track, which is really rough on tires. If Marc doesn't blow the bank right away, we can battle it out it to the end." 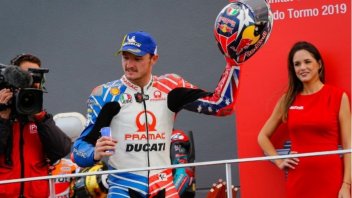 Miller: "Me instead of Petrucci? I don't want to steal anyone's...

The Californian Yamaha rider took the flag alone ahead of teammate Gagne and Herrin, who beat the Ducati rider in a photo finish. Elias crashed out...
23 hours 51 min ago

Defending champion wins ahead of Scholtz and Gagne. 5th and 7th, Wyman's and Jacobsen's two best Ducatis. Elias stopped by a problem.
1 day 15 hours ago

The reigning champion started has started 2020 in the best possible way, heading his teammate Jake Gagne. Race 1 at 22:00 on Eurosport
2 days 13 hours ago

In a video on You Tube, the driver defended his reasons but confirms the end of his experience with Audi in the Formula E
5 days 23 hours ago

It was decided by the Board of Directors via video conference call. Previously the FIM-Dorna contract provided for a minimum of 13 Grand Prix. In F.1...
1 week 16 hours ago