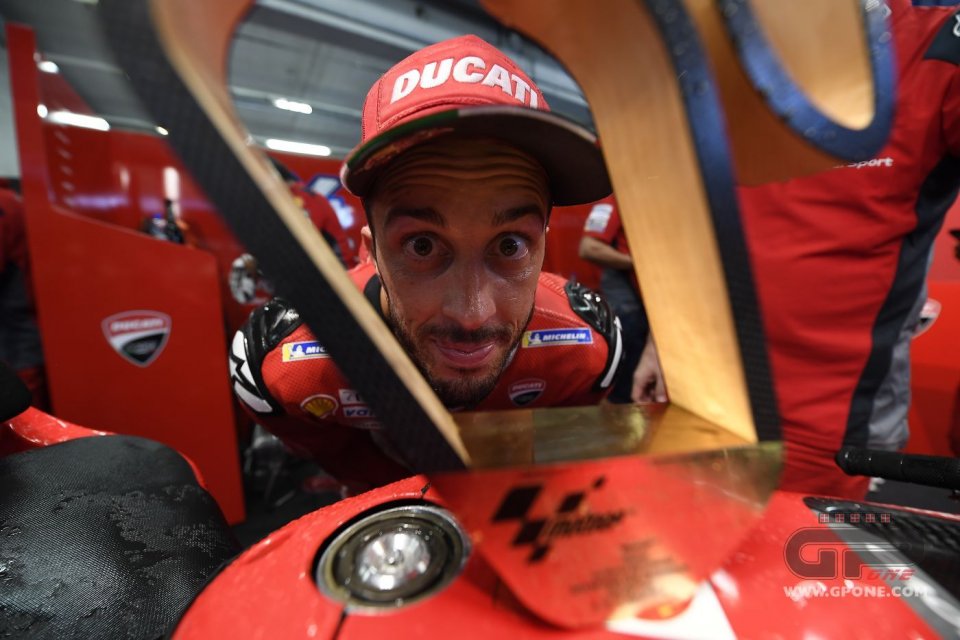 Wins aren't all the same. There are some that are more special than others and that can even amaze you. Dovizioso's win at the Red Bull Ring belongs to this category because he beat Marquez at the last corner, passing him at a point where Marc himself had never managed to complete his maneuver. This is something to remember. A sort of eulogy to madness written by the most rational rider of the MotoGP. Something that doesn't happen every day.

"Maybe this is really my best win ever," Andrea smiled after having dedicated this win to Luca Semprini, Ducati's press officer, who passed away just over a week ago.

How would you describe this race?
A confrontation between me and Marc from the first to the last corner."

The last corner was your masterpiece. How do you do it? How did you think of it?
"The one on paper is not favorable, neither for me nor for Ducati. But when I got there, behind him, I couldn't help but try. The worst that could have happened, I could have ended up long and arrived second. I did something crazy, but I did it particularly well," he laughed. "I managed to catch up with him when he was exiting the second to last corner, to stop the Ducati."

Did you catch him by surprise?
"I think so, but I didn't expect to succeed. I thought he could fight back but, as I later found out, there was a bit of contact and he wasn't able to. Sometimes trying something strange can lead to unexpected results."

Now that you've discovered you're capable of doing crazy things, will you still use this quality?
"You always have to be clear headed in the race. You have to be crazy at the right moments because, most of the time, it can end badly, but in others it works. It's all experience for me. I also learned from this victory, from the way it came, and I'll study it thoroughly."

What lesson are you taking home?
"When you're at the limit, you see only closed doors in front of you, but if you can keep your mind calm, then you can open one. It doesn't open by itself. You have to do it, and the work to do starts from the work done at home."

By now, you've become a specialist in the last-corner battle with Marquez.
"In fact, I'd propose to change the rules and give points for these battles too," he laughed. "Winning them is really satisfying, but only 5 points."

Don't you think being beaten this way bothers Marquez?
"It does because he's a champion, but he also knows he's strong, and he's intelligent, so he gives the right importance to these results. The truth is that when he is not doing well, he still manages to fight till the end."

He said he had chosen the wrong tire.
"In fact, Marc is not one who hides behind excuses. He struggled in the race, but arrived up to the final sprint. It's a simple reality of the facts."

Do you feel this is a victory that is more yours than Ducati's?
"No, you can't win alone. What allowed me to win was the work done in the tests and how I managed the race. Like I said, it's the best race I, actually, that we have won. We had to find a way to stop Marquez and we succeeded. I was able to figure out what his weaknesses were at the end of the race."

What were they?
“From mid-race on, I had more grip than he did on the right side of the rear tire. This advantage in acceleration allowed me not to let him get away before and attack later. I was aggressive at the start of the race, he more than me, but I never gave up. Once I crossed the finish line, I saw all my friends who were waiting for me at the first turn, and it was an explosion of emotions."

Is it the victory that consecrates you as a champion and not as a great rider?
"I don't care about these things, like other riders who write it on their helmets (ed. referring to Lorenzo). People can think what they want of me. I'm focused on how and what to improve. This is the goal. All the rest are only details.”

Will this success help to bring the Ducati locker room back together?
"We needed it, it gives us a lot of energy for the future, and it definitely helps to improve the atmosphere. Winning when you're not the fastest, but thanks to the work done, gives you a lot of energy."

Even to still hope for the championship?
"It's still open because there are so many races left, but today's result doesn't change the future in this sense. Marquez once again showed his potential, and I look forward to it on every track. We're working to develop the bike. We did it again this weekend. We know that going up against Marc is difficult, but this doesn't change our approach."

The first of four episodes will be available starting January 27th, while the final episode will be released on February 7th. For now, it’ll only be...
3 days 23 hours ago