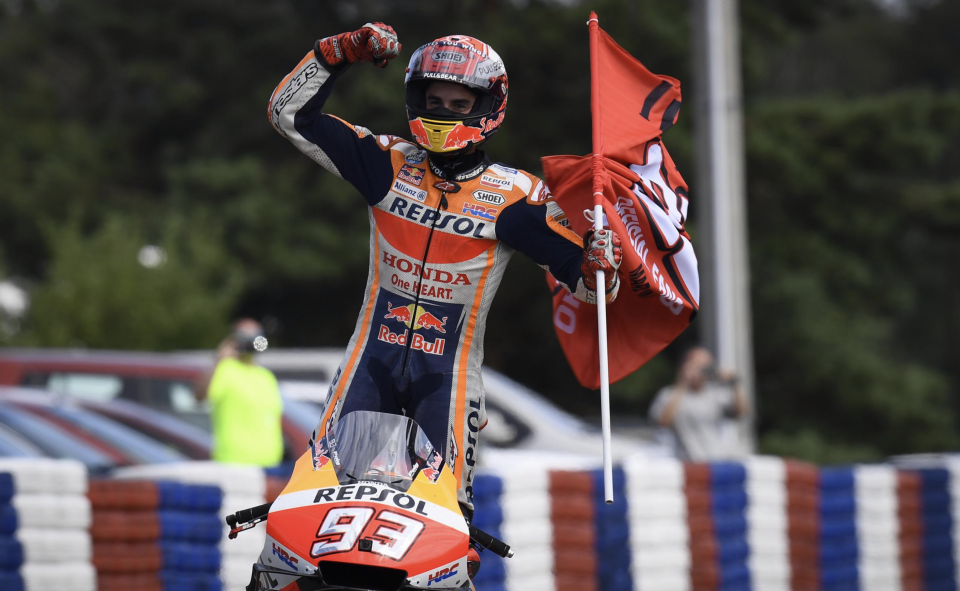 He's always the usual Marquez. He gets right to the point and grabs the victory, precisely  in that Brno which has given Ducati much joy in the past few years. A victory that might finally KO his rivals and the world championship. It all seems pretty clear by now. Any tire he uses, whatever bike he rides, whatever the weather conditions are or the track, Marquez is competitive and aims big. Yesterday's qualifying session is a clear demonstration, with slicks under pouring rain, at the last corner in Brno, ahead of everyone by 2.5 seconds. Today's splendid victory, proof that it was thought out and reasoned, with only 4 laps at 100%.

"The race pace wasn't my best," said Marc. "Dovizioso was really good at sticking with me. My strategy was very clear. I had chosen the soft tire because I thought I could immediately stretch it, since the Yamahas were starting from behind, and I wanted to break away from Andrea, who was starting off with a medium tire, but it wasn't possible. I was holding my breath at times. I did 3/4 laps at my limit, and they went well. That's what made the difference."

The warm-up this morning must have also made lots of difference for the 7-time world champion, who didn't close at his best with a sixth position.

"The warm-up was important to understand what needed to be done. I rode with a tire that had 6 laps on it, which are a lot here. That's when I realized that I had to change something to try and have a good race. It's the first time in my career that I get on the track in a race with a completely new bike when it comes to set-up, but I felt that it was the right choice, considering the advantage I had in points and my confidence. I was calm because my technicians calmed me down, as if they knew I would be fine, and this gives you extra confidence. I won't deny that, after the warm-up, my goal was to make the top 5 and lose as few points as possible."

Even the weekend had opened with this prospect: to lose as few points as possible from Dovizioso who, on the Brno track, seemed to be the number 1 favorite.

"I'm really happy I won today," continued Marquez. "Starting the second half of the season at our best is what we needed. This is a circuit that I usually don't do well on, so a victory here counts even more, since it's also one of those circuits where it was thought that Dovizioso would have gotten more points than me."

"The championship is still very long, and it'll be difficult to maintain the right concentration because when Dovi is at his worst, he closes fifth and always has a lot of speed. It's a bit different with Vinales, who is less constant. I have a good advantage, but I have to concentrate."

A really important race for the championship, but it was delayed because of a downpour between the end of the Moto2 and the start of the MotoGP, only in the first sector of the track.

"I think starting a few minutes later was the right decision because it's important to give priority to the safety of all the riders. Turn 2 would have been really dangerous with dry tires because there was a lot of water there. The circumstances were really strange, and it was worth waiting half an hour to race."

Next week you'll be in Austria where Ducati is the real favorite. The only flaw in this is that the Borgo Panigale team also arrived in Brno with the same definition. Is Marquez ready to win in Ducati's kingdom?

"I thought that Ducati would have been more dangerous here because I was very close to them the years I spent in Austria, but I was in more trouble here, just like at Mugello. It's the first time I've won here on a dry track. We'll see if I'll be able to fight for the victory next week or if I'll have to settle for the podium."

As usual, even his brother Alex cleaned out the competition in the Moto2 and gave the Marquez family a great double win. The fourth of the season.

"It's nice to be able to train with your brother and reach the same goal." Marc said. "I'm happier for him than for myself. He's in an important moment. He's in good shape and must keep on like this, with the same mentality and ambition he has had until now. Today he kept up really well against Di Giannantonio. He has to think about the day when he won't win a race and be satisfied, otherwise, he's doing really well."

A dive into the past this week as Marc equaled Doohan's pole positions and Hailwood's victories. Now we can ask ourselves how long it will take to reach Angel Nieto's 90 victories.

"Seeing your name next to these legends is great, even if it's strange. It keeps you motivated and raises your ambition, but I don't care much about records. I prefer not to think about it too much. Nieto's record of 90 victories? Angel is Angel. It'll be really difficult to match him."

A word also about the "skirmish" with Rins yesterday during the qualifying session.

"I told him I didn't want to slow him down," Marc concluded. "And he apologized for what he told the press. People have to understand that we're all young riders, myself included. We're still learning, and I've always had a very good relationship with Rins. I don't have friends on the track because I race for myself, but outside we respect each other and give each other a handshake."