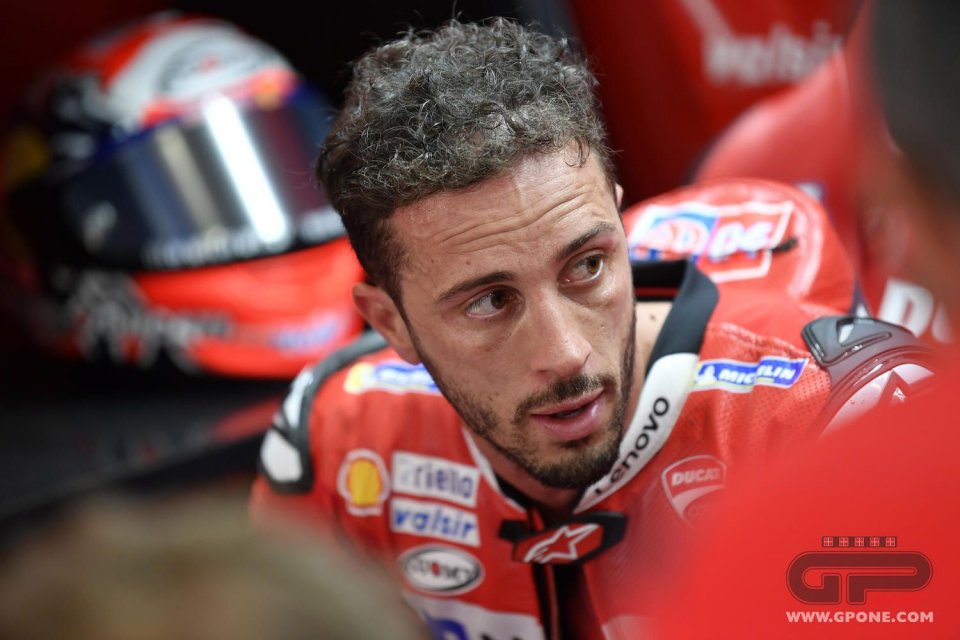 To all intents and purposes, Andrea Dovizioso can be considered Marc Marquez's number 1 rival in recent years. It's been since 2017 that the two have been sharing the scene, with the Spanish rider who's always managed to bend the Ducati rider's iron will. Certainly, there has never been a completely equal comparison, and it's always been clear that while, on one hand, Marc has always been able to count on his immense talent and incredible aggressiveness, on the other, there's Dovizioso, who has reached the top, thanks to very hard work and physical and mental preparation, which has allowed him to be considered the rival of this authentic phenomenon.

Today, however, Marc has hit everyone really hard and the first to be hit by a powerful shock wave was probably Andrea Dovizioso. Dovi, however, didn't lose his temper before Marc's monstrous performance in the Brno qualifications and, as usual, he chose a pragmatic approach, preferring to think about the work to be done to fill the gap with the Spanish rider. An indifference that almost seems to convey Dovizioso's complete impermeability to this modern MotoGP star.

"It's not that it doesn't bother me," said Andrea. "Like other riders, I think I'm aware of Marc Marquez's characteristics and strong points. But I think I'm going up against a rider who has certain characteristics and, in certain situations, is a bit of a masochistic, and that's not  the way I am. I don't give importance to certain things that he does particularly better than others. What matters is the final result. You have to look at the picture from a distance and try to bring home the best you can. He does it in a way that many like because it's also fascinating. But if there's a different and perhaps softer way of doing it or of trying to fight against him, that's what we're attempting."

But it's strange to see your indifference after such a performance by your rival.

"It depends on how you are, what interests you. Honestly, today he did something he had already done in other circumstances in the past. He won so many races in similar conditions, changing bikes before the others. He knows he has these characteristics, and he knows he can anticipate a bike change. A condition that then becomes a big advantage at the end of the race. It is truly awesome. I can guarantee you that managing slicks with lots of water is really difficult because you don't feel the limit. Instead, when it's wet, you feel the limit and almost play with it. Honestly, this doesn't impress me much. Marc also has other characteristics and aspects where he's really hard to beat, where it's impressive and more fascinating."

Why do you think he pushed so hard on the second attempt, when he already had the pole in his pocket?

"When you're on the track, you can't know how the others are going to be. In a situation like this, you don't know who may have changed their tires and is pushing, so he might have kept pushing. At that moment, it also started to rain again. But, if he hadn't done it, he would probably have ridden stronger even a few seconds longer."

In your opinion, wasn't it an excessive risk?

"Maybe he had seen Jack and decided to go further. Certainly, the risk he took was really high because when you fall, anything can happen, and you risk compromising other things. But Marc is really good at these things. He was able to handle himself really well. He challenges these situations. He feels the challenge and, I have to say that he's good, and it's good that he keeps trying. It's an attitude he has. He has this fire inside him and the desire to always show that he's the strongest. Consequently, these occasions are ideal for him to confirm this. Jack was also good. They both mounted the slicks and improved, and they did it in a condition that was almost impossible."

They've already asked you, but it's worth talking about today. Is he unbeatable?

"He's strong, really strong. It's useless kidding ourselves. Those who don't admit this are only fooling themselves. However, our job is to do better than him, so we have to work to find aspects and points where we can do it. Experiencing a qualifying session like that doesn't break me down. If tomorrow he takes a step that allows him to leave us at the stake and wins the race, that could be a problem. Today he was good at managing a situation better than others, but he didn't get points, so it doesn't count much."

Since he loves challenges, maybe a strategy could be one of provoking him, of challenging him aggressively to make him lose his temper.

"For any kind of strategy, first you have to be fast, and you have to try to keep up with him. In the last race, it wasn't possible for us, so these are just ideas. It's clear that Marc seems to be the madman of the group, and the mechanics try to control him because otherwise he gets wild, as he's done in the past. We have to think about becoming competitive to the point of being always ahead because when you have a strong rider in front of you, it's tough. There are so many ways to try to create a situation, but you're not fast enough to get close to him. Any reasoning on strategy is useless."

Thinking about your situation, the prospects for tomorrow don't look that bad.

"Tomorrow I'm starting in front, and that's great  because making mistakes today would have been easy, but I managed to avoid them. My time came out without taking unnecessary risks. In my opinion, under these conditions, it's easier to make serious mistakes than to be fast. If I'll be able to work in a certain way in the warm up tomorrow and start with a certain pace to figure out how to handle it during the race, we'll see. The important thing will be to manage the wear on the tires in the race."

"It's not easy to figure out what will happen tomorrow because we have had only a few rounds to understand the numbers on the field. We're doing well, but Marquez is also good, and there are other riders who are fast in the race. The choice of tires will also be a factor because we've seen that, among the various solutions, there's a lot of difference in grip, and the choice of each one will change the numbers in the field. Nobody really knows how we'll be, also because there will be a lot of tire wear here."

Which condition would you prefer?

"I would prefer a dry race because we haven't really raced on a wet track yet this year, so it's not clear who's really fast. Marc was fast in the FP4, but it wasn't that wet on the track. When it rains hard, we're usually very fast, but I don't know how much the other riders could have improved in these conditions."

Audio recorded by Matteo Aglio and Paolo Scalera in Brno