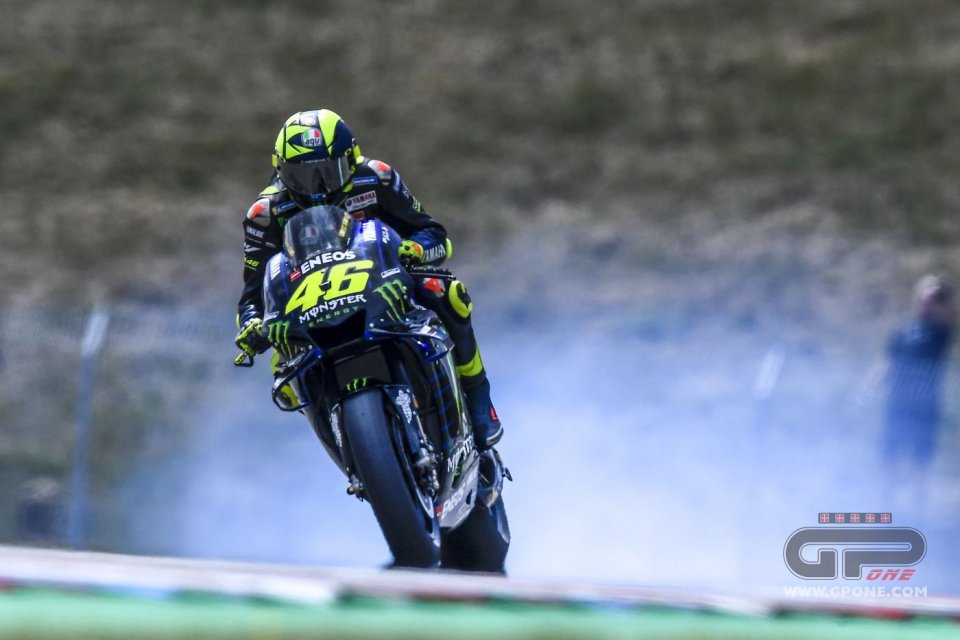 "Being back on the bike is awesome," Valentino said smiling at the end of the first day in Brno. Not that awesome, since a 9th place doesn't sound like it's ringing in the parade, but just enough to joke about. "I can vote this day a 9, like my position, but where 1, not 10, is the best result possible."

But  being in the top 10 is important, especially because they're predicting rain for tomorrow. Again, Rossi answers ironically. "If I were 11th, I'd be sure that it's going to rain, but since I'm in the Q2, it won't. At most, it will after the FP3."

But he also had a bit of bad luck with the engine of his Yamaha that went up in smoke in the FP2.

"Something certainly broke down, but I don't know what specifically," he said. "It was an engine that was dying, with many kilometers, and I fortunately managed to pull the clutch before it broke down completely," a sign that his experience as a two-stroke engine rider who's used to freeze-ups has its advantages even in the MotoGP. "I immediately felt a drop in performance, but I wasn't losing oil, it was only smoking. I checked on both sides, even my boots were clean, and I managed to get the bike back to the pit. The rear tire was clean. In fact, we mounted it on the second bike."

Having dismissed the incident, Valentino was able to return to the track and grab that 9th time, which safeguards him from the whims of the weather conditions.

"The first contact was good ,"  he said, optimistically. "And being in the top 10 was very important today. I rode pretty well, and I can say my my pace was good too. That said, there's still a lot to do."

Especially with the tires.

"After 3 or 4 laps, the rear tire started to slip ," he explained. "The key to the race will be to stress it as little as possible and be consistent. We're all going to have the same problem, regardless of the compound we'll be using. However, I'm not far from the best, and I'm still looking for the right balance. Of course, if it doesn't rain tomorrow, the tires will be able to grip the asphalt better, and this reduces problems of wear."

Speaking of asphalt, many riders have complained about all the holes.

"The holes in Brno are famous. They've been here since 1996, always exactly in the same place, and by now I call them by name ," he laughed. "The critical points are Turns 3, 10, and the last one, but it's not a big problem. Logically, the asphalt gets a little worse every year, but it's still not so bad."

Vinales: "I can do better in the race than in qualifying."

If Valentino is cautiously optimistic, his teammate, Vinales, is entirely so. Maverick finished in 5th place, but it's not the flying lap that  puts him in a good mood. If anything, it's the work that was done leading up to Sunday.

"Even if it'll rain tomorrow, I'm already sure I have a good foundation," the Spanish rider said with satisfaction . "I worked a lot for the race today. In fact, I had my time attack halfway through, because I wanted to try to see if the soft compound could have been an option for the race."

And the answer was yes.

"We can use it even if it has a drop, like all the other compounds ," he specified. "While, on  the front, I worked a lot with the hard compound, which was fine last year. The most important thing is that I feel good on the bike."

Aiming for a  pole position?

"Qualifying rounds are always difficult in Brno. I know I can do better in the race," said Vinales.