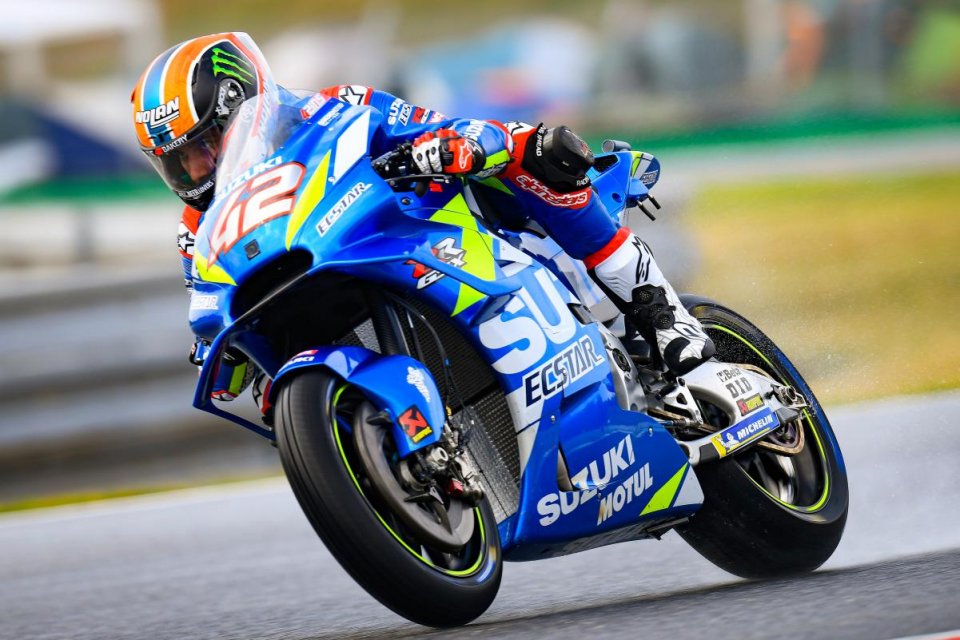 Alex Rins' day was definitely filled with excitement. Besides to having constantly decipher the conditions of the track, the Spanish rider is at loggerheads with Marc Marquez, triggering a battle like one of yesteryear. Alex, on his part, doesn't mince words, and he openly says what he thinks.

"It's not the first time he's behaved like this. Everyone knows Marquez. He's really talented, but he behaved the same with Vinales in the FP1. He tries to get into the heads of the other riders," he said disputingly. "But I'm very calm. If I were fighting for the title with him, I could also try these kind of moves, but that's not that case, and I don't know why he does this with me. Maybe he's afraid (ed. he laughed)."

N.42 then explained in detail how things went from his perspective.

"There is no doubt that it's a step forward for everyone, but he has no respect for the other riders. At Turn five, he went wide, and Miller and I were behind him. He saw Jack passing him and then getting back on track and, honestly, he got in my way. I was pushing, even though I wasn't very fast," he continued. " So, at the next turn to the left, I made my line. He left a space, and I entered, touching him, but I think the contact is his fault. If I had been in his place, I would've let both pass. I don't think I'm like him."

Suzuki's Spanish rider explains his reasons, since the argument then continued for a moment in the pit lane.

"If you're going slow, you have to make room for the others. Later, he really broke away at the last turn to pass me, and while we were entering the pits, I was in front of him, and he didn't have the space to pass. In that case, I would've cut off the throttle, since we were in the pit lane."

But there's also talk of the sixth position obtained. An encouraging result for the race.

"I'm starting off sixth, and that's positive. Our pace is good in every condition, so I want to have fun. Choosing the tire during the round wasn't easy. At first, I got on the track with a medium pair. It wasn't  easy to understand if the slicks could really be the best choice, but the result satisfied me."

Alex's sensations on the bike were good, also thanks to the new fairing  previously promoted by the test team led by Sylvain Guintoli.

"Thanks to him, we were able to use the new fairing yesterday. We had planned to try it in the tests on Monday, but Sylvain transmitted his good feelings to me after the Motegi tests, so I decided to try it over the weekend."

"I'll have to move forward this season, but without making mistakes. Jerez is not the track where we'll see the full potential of the GP20."
1 hour 3 min ago

"I slowed down to avoid traffic and didn't think about cold tires, so I slipped. The Yamahas are ahead, but Marquez is the man to beat."
1 hour 41 min ago

The dynamics of the incident are not yet known, but no serious damage was reported and the flames were promptly put out
2 hours 42 min ago

"Lapping is exhausting, but the asphalt has held up well. The problem? We could not test the reliability before today, but I'm happy with the bike"
15 hours 51 min ago

The rider also injured his head, doctors gave him the okay to continue tests, but Danilo could stop as a precaution
21 hours 30 min ago

Alvaro and Leon Haslam will be back in action on Thursday and Friday at Motorland, new material and engineers expected from Japan
2 days 17 hours ago

For the first time the riders will use the brand new rear tyre in the race which will be put to the test by the extreme heat. In MotoE tyres made...
2 days 19 hours ago