We might as well have copied and pasted from our Le Mans qualifying article. Yes, because in the damp conditions with both wet and dry sections of the track, Marc Marquez is once again a mix of genius, talent and madman. Here it's not just about pure speed on track, but understanding of one's bike and tactics, staying one step ahead of the others.

We're sorry for his rivals, who are once again left rolling up their sleeves, having witnessed the superiority of the Spaniard, who set a fantastic 2’02”753 with the slick tyre while rain was falling. Needless to say, there's nothing anyone can do about Marc right now, and we're barely surprised that the championship is as good as sewn up already, just a little over halfway through the season.

The Spaniard taught his rivals a lesson on Saturday at Brno, not least Andrea Dovizioso, who closed almost three seconds back (+2.837), forced to settle for fourth place. Another one left taking notes was Maverick Vinales (+3.873). As Marc headed back out on track to attempt a time attack, the Spaniard returned to his garage and stopped, considering the rain that was falling. Once again the Yamaha rider has shown his limitations in the damp conditions, as has rookie Fabio Quartararo, tenth and almost four seconds from pole.

In what was essentially a lottery, Jack Miller was almost guaranteed a spot on the front row. Despite being more than two seconds back, the Australian is always strong in these conditions, something he proved once again today. And if he hadn't used two slicks, he might also have avoided crashing in the final stages. Alongside him a surprise in the shape of Johann Zarco. A day to remember for the Frenchman, who got through to Q2 for the first time this season, before scoring a front row start on his KTM.

Just sixth for Alex Rins, who scuffled with Marquez during the session. Valentino Rossi will start from row three, having done his best to remain upright in the tricky conditions. Eighth for Petrucci and twelfth for Morbidelli behind Crutchlow on the Honda. 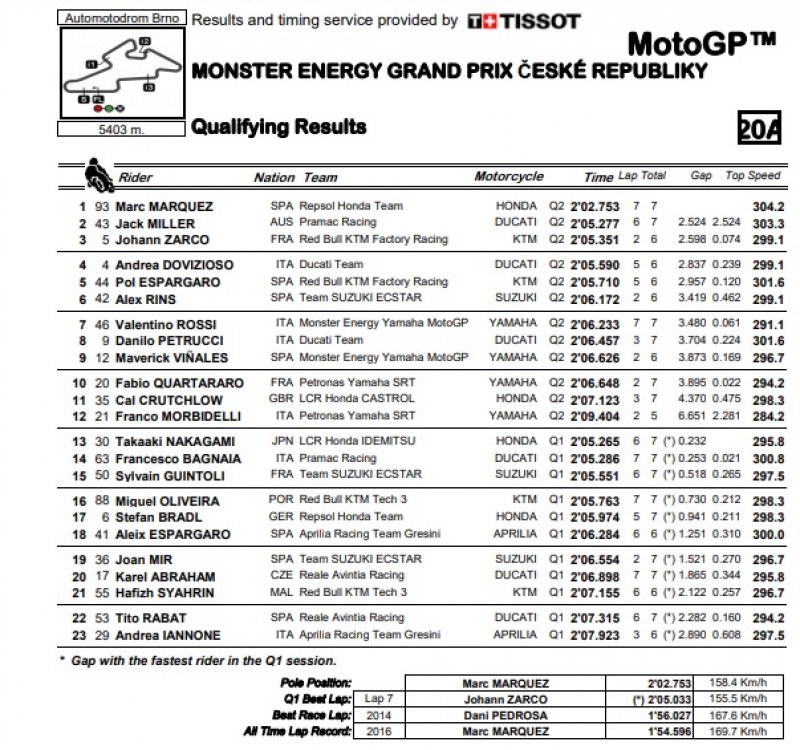 Just 10 days ago the ex-racer had to deal with the loss of his grandmother, who died at the age of 102
1 day 7 hours ago

BMW riders want a lucky sticker to go on their bike for the next round! This competition is open to all BMW Motorrad WSBK fans aged between 5 and 11...
1 day 8 hours ago

REVISED CALENDAR - The 8 Hours of Suzuka is confirmed on 19th July, financial aid for private teams planned
2 days 15 hours ago

"I was slow last year, but now I have everything I need to stand out. I wanted to win in Qatar, but a fourth place means a lot to me."
6 days 7 hours ago

As the situation remains in a state of constant evolution, new dates for the French GP and the recently-postponed Gran Premio de España cannot be...
1 week 14 hours ago

MotoAmerica will return to the Brickyard for the first time since 2015 in 2020, but it will do so now on October 9-11 after a schedule change due to...
2 weeks 3 hours ago