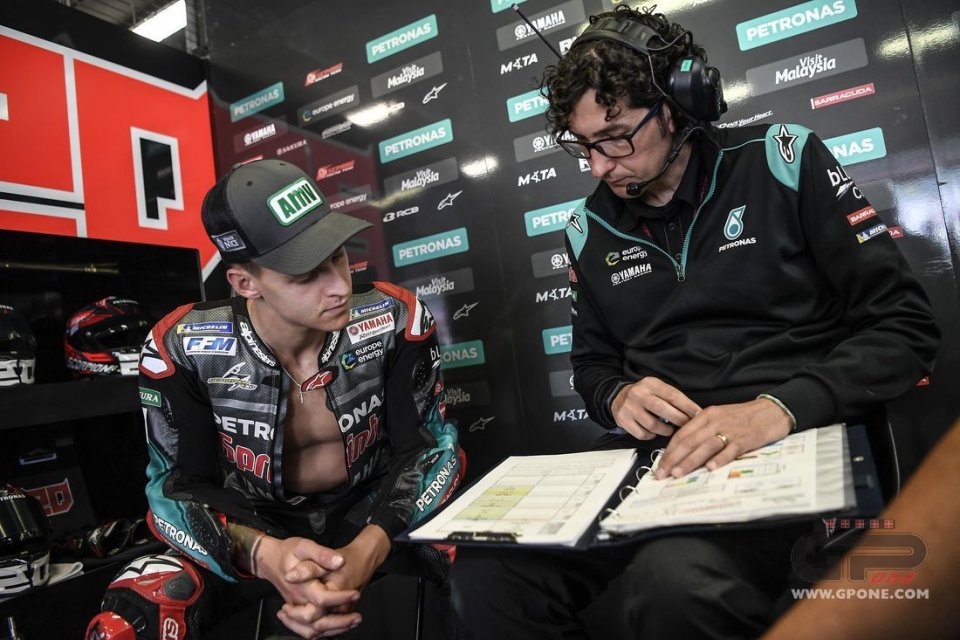 He's twenty years old, with a French elegance when he rides, but also the warm temperament of Italian blood and of the many years spent in Spain. Fabio Quartararo is the next big thing in the MotoGP. Arriving at 15 in the world championship with the stigmata of the new Marquez, the rider from Nice was not very thrilling in the Moto3, and it was normal to wonder why the Petronas team chose him last year after only one success in the Moto2.

Sometimes fate takes roads that even Google Maps cannot predict, and the gamble was rewarded with a jackpot. Even his meeting with Diego Gubellini, his current chief technician, was somewhat fortuitous.

"My initial plan was to continue to follow Morbidelli but, when Pedrosa decided to retire, Yamaha decided to entrust Franco with the Forcada team, so I was entrusted with Quartarato," said Gubellini.

Did you have any doubts about his engagement, given his curriculum?
"The team's choice was logical. Usually, we look at the Moto2, starting from the best, which was Bagnaia last year, but he had already signed with Ducati, like Oliveira with KTM, while Binder had already decided to stay in the Moto2. Fabio was, therefore, a credible alternative because he was young and talented."

"Quaratararo is humble and steps up to problems."

Did you know him already?
"I first spoke with Fabio here at the Sachsenring a year ago, and I liked him off the bat. I had signed, sight unseen, but I was at ease when I left that meeting. First of all, my first sensation was excellent. We immediately hit it off. I liked the fact that he faced this challenge with great humility. It doesn't often happen for a young guy to have this quality.

Is it something he also has in the pit-box?
"Yes, that's his approach. He's a rider who steps up to problems. He doesn't want the solution from the setting rather than from the tires. The first question he asks himself is: what can I do to become stronger? It's neither an ordinary nor a predictable thing."

Does he remind you of any other rider?
"I think he's simply Fabio Quartararo, in the sense that he has his own characteristics and does not resemble anyone else. His MotoGP story is reminiscent of Stoner's, who exploded in the premier class."

Is he a bit naif like Casey?
"In the garage, he's a twenty-year old guy, very carefree and "easy", so to speak, but he's also a professional. He 's not one of those riders who are too serious. He concentrates when he has to ride, and when he gives us his indication. He's analytical and precise in those moments. We speak three or four different languages in the garage, and he likes to learn new ones, so he goes to all the mechanics to be taught the various phrases to say at the right time."

And does the M1 seem to be made for him?
“Basically, Yamaha is a good bike. It's well balanced, and this allows it to go well, more or less anywhere. Maybe it doesn't have very strong points, but neither is it too weak. This means that the first approach to the bike is less complicated than other brands."

"The Yamaha is easy, but not when you're aiming for a pole or the podium."

We always say that the M1 is an easy bike...
"That's not entirely correct. It's easy to reach a certain level with the Yamaha. I would say the one next to the Top Ten. A talented rider succeeds without changing his style to get to that point, but getting a pole position or getting on the podium is very difficult. The M1 is easy because it guarantees you a foundation that works."

That's important for a rookie.
“In the winter, before going to look for the details in setup and electronics, we thought about gaining experience, both for myself and for the rider. We started from the best setup in Valencia, which was Vinales', and we kept that configuration until today."

When did you realize that you could get certain results?
"The first goal was to take the first 3 races with ease, to reach the top 12 and, from Jerez onward, to stay in the Top Ten quite constantly. He probably didn't understand me," he said laughing.

It's forgivable.
"In the tests in Qatar, he reached a 3rd time, 5th in qualifying in the GP, and we knew he was learning fast. But I like to go very calmly, and our goals have not changed, and we were very happy with the 7th and 8th times in Argentina and Texas. Then we arrived in Europe and there he exploded."

What triggered him?
“For a rookie, it's important to ride on tracks that he knows well because they allow him to acquire certain automatisms. He can concentrate more on riding and on the innovations requested by the MotoGP, from managing tires to the rear brake, for example. Once you learn these skills, they then become automatic on all tracks, and that's why he was strong starting from Jerez on."

"Quartararo has no weaknesses but lots of room for improvement."

Do you see weaknesses in him?
"There are points where he can develop. We've always tried to put him under pressure because he's young and has had a difficult career and must take into account his past. He is doing much more than anyone expected from him, but the goal remains the same like at the start of the season. A 10th place would still be a positive result. Fabio is still discovering his real value and, in this sense, there's still lots to do. Physically, he's really prepared, but he still doesn't have the structure or resistance he will have in 5 years. He'll surely improve with time. He lacks the experience, but he's astute and adapts very quickly. I don't see any negative aspects, but lots of room for improvement, although he's already at a very high level."

Moving on to purely technical matters, for some years now, many have wondered why the Yamaha satellites are faster than the official ones. Do you have an answer?
"Surely, it's related to development. The official team tries certain details during the weekend to then reach a decision. Although this doesn't mean that we get new material because our bike is always the same," he said laughing. This wastes time could be dedicated to researching the best setup or testing the tires. I don't know what to say for the rest but, up until now, the official Yamahas have always been up front. Valentino had more problems during the practice sessions, but he's always then had good results during the race, and Vinales had problems only in the first part of the race. In terms of pure performance, it's difficult to say that the Yamaha satellites are stronger if we look at things in detail."

This time we need a direct answer. Will Quartararo win a race before the end of the year?
"No."

Are you saying it just to ward off bad luck?
"Exactly!" he laughed.

Do you already have an anecdote to tell Fabio?
"Nothing I can make public," he laughed again. "But two days ago, for my birthday, he gave me a statue of Chewbacca after discovering that I'm a Star Wars fan."

What role would Quartararo play in the saga?
"The main character. Luke Skywalker."

The force already seems to be with him.