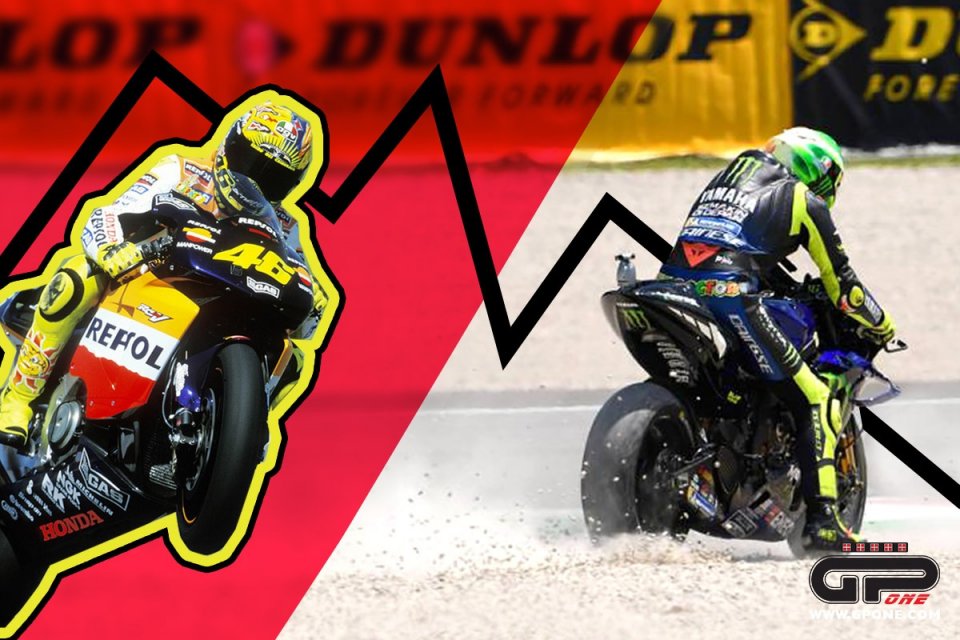 “I've never scored so few points in 9 races? Are you sure? Not even with Ducati?”, Valentino Rossi, following the Sachsenring race, was the first to be surprised by this season's negative record. The standings tell us that he's scored 80 points in the first 9 races (less than 9 points per round on average) while even in 2012, his last disastrous year on the red bike, he was doing 2 points better.

Even if we stop here, there's reason enough to worry. Even more so if we analyse his results over the first half of the season each year from 2002 (his first year in MotoGP) until now. You can see the curve here below. Having dominated in the early years, with endless podiums and wins, there is a first dip in 2006, when he lost the title to Hayden having made too many mistakes. The curve then rises again, before dropping in 2010 when he seriously injured himself at Mugello (the fourth round of that season). Then comes the two-year Ducati abyss, in which the numbers say it all, before his return to Yamaha, which brings a continual climb, 2013 involving one win and 4 podiums, 2014 more points and five podiums, and then 2015, when the Doctor is back in shape, scoring 179 points over 9 races with continuous podiums and 3 victories. 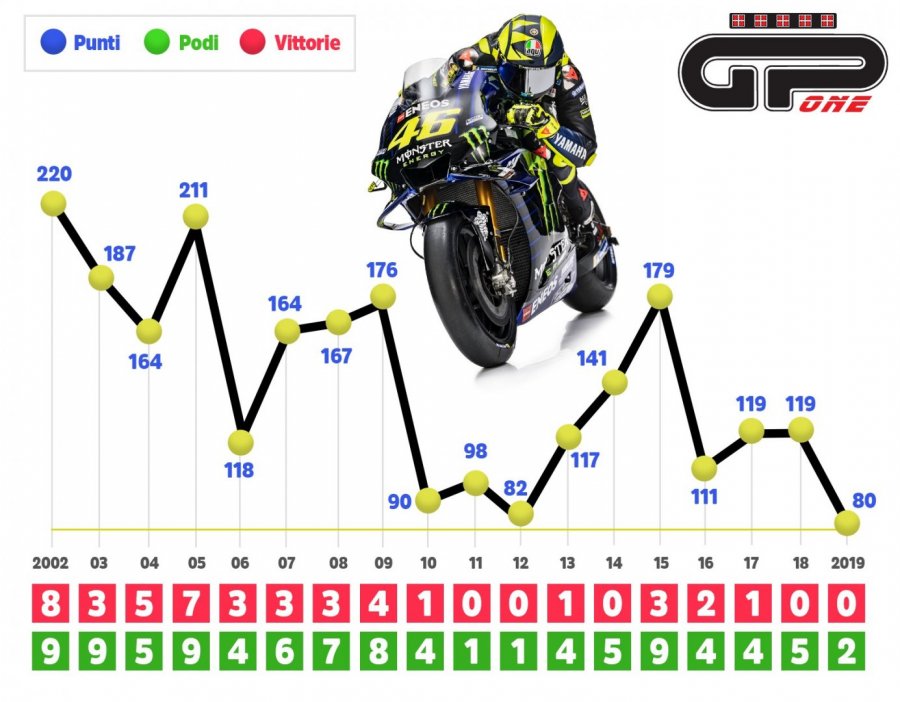 This is the year in which he lost the title at the last race and, at least until now, was the highest point of this second part of Valentino's life in blue. The downhill trend then begins in 2016 and has continued ever since. Rossi was still able to win two races in the first half of 2016, then one the following year, and that remains the last until now. Despite not winning races, Valentino was at least able to count on a degree of consistency in 2017 and 2018, reaching the podium in one of every two races on average.

Valentino's 2019 got off to an average start, with a 5th place in Qatar and then two second places in Texas and Argentina. Europe should have been happy hunting ground but instead it proved to be a nightmare. Never before has Rossi left the tracks of Le Mans, Mugello, Barcelona and Assen without one podium. Even with Ducati he was on the podium in France.

His worst season start with Yamaha

Based solely on the figures, it would be easy to say that Valentino is beginning to feel his age. But we refer to Valentino himself here, the first to point out that “There are the three crashes”. It's true, those three zeros weigh heavily on the standings, particularly for a rider who “doesn't like crashing” as he likes to point out.

The 2010 injury aside, Rossi only failed to complete 3 of the first 9 races in 2016. He collected three consecutive crashes that season (Mugello, Barcelona and Assen), one of which was not his fault. If we consider the crashes and the numbers, this might not be his worst ever season start (in 2012 he lay 2 points ahead with one crash) but it is definitely the worst he's ever experienced with Yamaha.

More than enough to give his detractors cause for comment. So what's the problem? The Yamaha was the prime suspect for many months, but it's more difficult to claim this now. Vinales won with the M1 at Assen and finished 2nd in Germany, while rookie Quartararo, has scored two consecutive podiums at Barcelona and Assen. This gives the Japanese bike a very strong alibi.

And so it must be that Rossi is old. “But was I younger in Argentina and in Texas^ I'm old, but that's not the problem” replies the Doctor.

At this point, we can only point the finger at the year. At the end of 2013, Valentino split from Burgess to start working with Galbusera, looking for a change to the organisation of his garage. it worked because following Silvano's arrival, he finished four championships in second place. So, is it time to play the same card again? The same one that Vinales played last year, preferring Esteban Garcia over Forcada.

“I want to make things work with this team” says Rossi, shutting this door. Also because his days as a rider are numbered, with 2020 looking to be his final year, which makes a garage shake-up almost pointless.

So what is the solution? “To find my own path” answers Valentino. Ok, good, but he needs to do it quickly, because time is ticking and his rivals continue to improve. The three-week break could help him to gather his thoughts while the Brno test will provide a look into the future, with the 2020 M1 prototype set to take to the track. The rest lies in his hands.

“I've come out of complicated situations before” he recalls. He just needs to get that curve moving in the other direction and, if he manages it, the climb will never have tasted so sweet.

Doctor Costa: "the time of heroes is over, the Clinica Mobile was an altar...

The calendar for next year has been set and will be made public today. After Kazakhstan, another country enters the World Championship.
5 hours 53 min ago

Pecco will have to watch out for teammate Jack Miller triumphant in Motegi and eager to score another success, the fourth in his career in the...
1 day 27 min ago

2023 marks the start of a new five-year, Kazakhstan will also become the 30th country to host a motorcycle Grand Prix since 1949
3 days 5 hours ago