In 2019 a quarter of a century will have elapsed since the Ducati 916 arrived on the global stage, changing the Superbike world forever and immediately becoming a modern motorcycle icon. Ducati has decided to celebrate this anniversary in the worthiest way possible by building a special 916-dedicated version of the Panigale V4.

Ever since its debut, the Ducati 916 has been a favourite with both motorcycling fans and the specialised press on account of the innovative Italian-style, dynamic, lightweight design that, back in 1994, made it a sport bike like no other. Its unique lines and personality made it the first bike to be defined as “sexy”. Above all, it became an instant classic, so much so that, even now, 25 years on, it is held up as a shining example of mechanical art.

The Ducati 916 wasn't just a great bike and an enormous sales success. It also won World Superbike championships: the 916 SBK was a force to be reckoned with even as it made its debut and the following years saw it win 120 races, 8 constructors' titles and 6 riders' titles, four of them with Englishman Carl Fogarty on the Ducati 916 SBK and 996 SBK. Of the 55 races won by Ducati, 43 were clinched by Fogarty. Even now, the English racer and the 916 remain the most successful 'couple' in Ducati SBK history.

Alongside the Monster, the Ducati 916 is the most important bike in Ducati history. The forerunner of the Bologna-based bike manufacturer's modern sport bikes, its DNA and style have been the hallmarks of every subsequent model, including the Panigale family.

To mark this anniversary of the legendary Ducati 916, Ducati is proud to present the Panigale V4 25° Anniversario: a unique limited-edition bike (just 500 will be built) designed to let true Ducatisti re-live the spirit of the “916”. The “25° Anniversario 916” is built on the mechanics of the Panigale V4 S. This has been upgraded with racing content from the Panigale V4 R such as the Front Frame, designed to Ducati Corse specifications, the dry clutch and even more track-specific electronics, such as Ducati Quick Shift EVO 2, optimised for aggressive gear shifts, and 'predictive' Ducati Traction Control EVO 2.

The look of the bike combines a colour scheme that takes its cue from the Ducati 996 SBK with forged magnesium Marchesini Racing wheels, a titanium type- approved Akrapovič exhaust and a long list of carbon fibre and billet aluminium components.

The launch of this splendid limited edition comes just a few weeks after the death of Carlin Dunne at Pikes Peak and Ducati has decided that the No. 5 out of 500 will be auctioned, in order to donate all the proceeds to the fundraising set up to offer support to Dunne's mother, who actually used the No. 5 in the race. A decision announced by Jason Chinnock, CEO of Ducati North America and present at the event with Francesco Milicia, Ducati Sales Manager and Carl Fogarty himself. 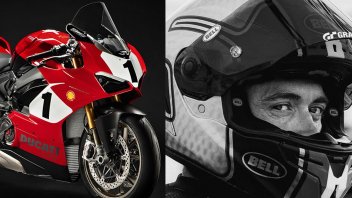 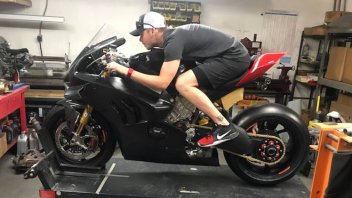 MotoAmerica will return to the Brickyard for the first time since 2015 in 2020, but it will do so now on October 9-11 after a schedule change due to...
5 days 8 hours ago

“It would be great for the sport and the country if the interest of the past returned. Hayden was one of my heroes and I cried when he won"
5 days 14 hours ago

The 2020 MotoAmerica Series round at Michelin Raceway Road Atlanta has been postponed to the July 31-August 2 weekend due to the ongoing COVID-19...
5 days 18 hours ago

The 7-time AMA Superbike champion charged in New South Wales. Arrested and then released on bail of $50,000, his passport was revoked.
6 days 9 hours ago