Marco Melandri announced his retirement from racing at a press conference in Milan just before leaving for Laguna Seca, where he will race for the ninth round of the season over the weekend. Marco says enough to 36 years after a career of triumphs and difficulties where, as he admitted, he found himself in the right place at the wrong time so often. It was precisely this last phrase, combined with the word "retire", that brings to mind the situation of both Jorge Lorenzo and Valentino Rossi, in difficulty with Honda and Yamaha and with rumors of retirement that are becoming increasingly insistent.

"Lorenzo and Honda are worlds apart," Melandri said during his farewell conference. "His riding style is the opposite of his bike, and I don't think he'll be able to improve and grow as he was doing with Ducati. He might think of retiring, but it takes a lot of courage, rather than deciding to keep racing. As for me, I made the decision to retire regardless of how I was racing. Maybe for him it just depends on that, and it's not easy because when you've been doing something your whole life, and that's all you know, it seems impossible that it could end."

This is an important day, not a difficult one because you said it was a relief for you. There are five races left till the end of the season. How are you preparing for them?

"I took a weight off my shoulders, so I'll face this last part of the season with a lighter mentality ," Marco continued. "I can enjoy myself now, and I want to see how it goes. This could help me a lot. I have to do my best out of respect for Yamaha, and also since I ride because I like to go fast, and I want to do it for myself. I'm ending it with races at a certain level, but I'm not going to quit riding."

When did you communicate your decision to the team?

" I told the guys at the garage by phone. I know I should have done it in person, but I didn't have the courage to."

You said we'll still see you on the track. What are your ideas?

"The MotoE is an interesting championship. It intrigues me because it's new. I have to understand what direction to take because Formula E, for example, is a great championship and it's growing. It might be interesting for me to race there because you can work on many new technologies, and I like the idea that the races are short and that there aren't many because I'd like to slow down the pace I've kept for the past 20 years."

During the conference, there was an emotional moment when you were thanking Alberto Vergani, your manager. Do you see yourself with him in the future or might you even be thinking of stealing his job from him?

"Alberto was important to me, but I don't see myself in a position like his. I'm not good enough. I like what he does, and I think I can give him a hand from a technical viewpoint. For the future, however, I have an online store with my sister where we offer free riding and rescue courses. We do this because I'd like motorcycles to bring people together, to be able to have fun and exchange ideas. The added-value I can give is to talk about racing, techniques, and driving experiences."

Did your family influenced the choice of your retirement?

"It wasn't really that but, the fact that my daughter is already five years old, made me think I wanted to be present more. Coming home from competitions and not appreciating everything I had loved before made me think that I would have enjoyed myself more at home. I want to enjoy her childhood and her growing up." 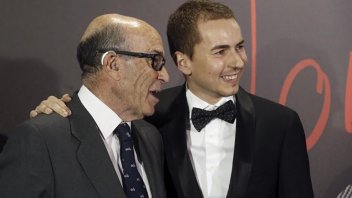 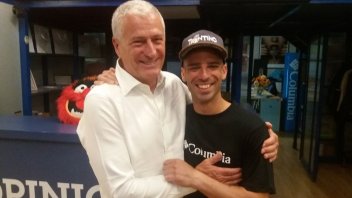 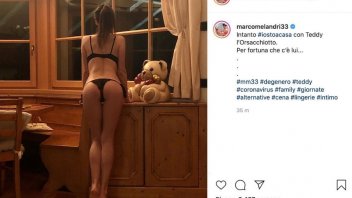 Melandri after the retirement has no nostalgia for the curves: #iostoacasa, says

VIDEO - The flames spread during a day of free practice, no harm to people or structures
3 days 3 hours ago

The reigning champion wins race 1 but ends up on the ground in race 2, giving the Suzuki rider his first career success. A 4th and 7th place with a...
3 days 9 hours ago

A non-stop week for the Ducati rider, beginning with the Misano tests, then a bike ride to Tavullia, and today on the Dorno track
4 days 3 hours ago

The collection will be up for auction August 15th and 16 in Bicester. The Morbidelli 250, with which Giacomo Agostini competed in Misano in 1976,...
5 days 8 hours ago

The SKY VR46 team rider injured himself training on the motocross bike: "I'm already going to the gym, soon I'll be back on the bike to check my...
6 days 4 hours ago

"If we have three overseas rounds on top of this it will be a very intense end to the year. Of course, if the final race of the year were in Malaysia...
1 week 10 hours ago