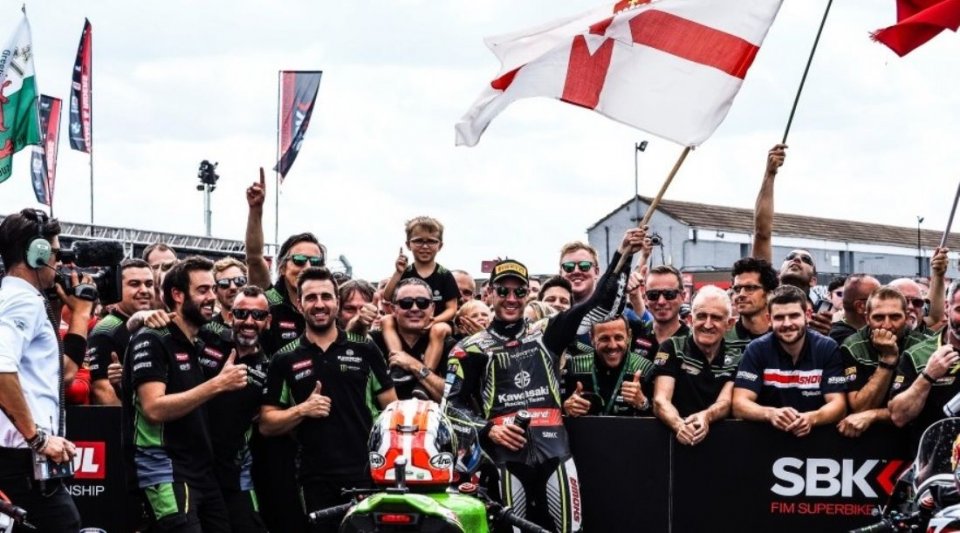 Perhaps it was its vicinity to Sherwood Forest that took us back in time as if the Donington round was something out of the famous classic. There was no Robin Hood on the English track though, but a certain Johnny Rea who, rather than a bow and arrow, had a Kawasaki that took no prisoners.

Ducati knows something about this, Johnny Rea having usurped their throne, though the Spaniard has chance to fight back already next week. The UK also saw Jules Cluzel return to winning ways in SSP, while Kevin Sabatucci celebrated his first SSP300 win.

THE GOOD– Race 1-Superpole Race-Race 2: what more do you want in life? For more details, ask Johnny Rea, who proved to be the Cannibal once more and even moved into the championship lead. Hats off to the Kawasaki rider, impeccable in front of his home crowd. And to think some had started to think he'd turned vegan!

THE UGLY – Alvaro Bautista hadn't raced at Donington Park for ten years. There were no shortage of setbacks for #19, who struggled all weekend. First the crash in race 1, then a Superpole Race on the defence. The only consolation a third place finish on Sunday afternoon that allowed him to limit the damage. The lead has been lost though.

THE BAD – The regulation needs to be looked at, and soon. The case of Tom Sykes who, after the red flag came out in the Superpole Race, crashed on the oil left on track by Hickman while returning to pitlane. The fact that Tom couldn't get to parc ferme in the five minutes set by the regulation saw him excluded from the classification. But the race had finished before Sykes crashed. As well as missing out on second place, he also had to start race 2 from tenth.

THE DISAPPOINTMENT –This Ducati seems tailor made for Alvaro Bautista and the V4 project would be a flop without him. Hands up anyone who saw Chaz Davies or Michael Rinaldi at Donington.

THE CONFIRMATION – A podium at Imola, at Jerez, at Misano and a double podium at Donington no less. Not bad this Toprak Razgatlioglu, now a sure thing. It's only a pity he wasn't up with the best right from the start of the season!

THE MISTAKE – There are crashes that weigh heavily and Alvaro Bautista knows all about this. The highside he suffered on Saturday didn't just force the Aruba rider to wave the white flag, but also hand the championship lead to Rea on a silver platter.

THE SURPRISE –The SuperSport300 was the only category in which an Italian had not yet won this season. Kevin Sabatucci put this right, scoring his first win at Donington. A gutsy race for the Yamaha rider and a Sunday that will stick in his mind for long to come.

THE PASS– Just the right amount of bad. The prize goes to Johnny Rea for his move on Tom Sykes that awarded him the Superpole Race win.

THE INTERESTING FACT– Even if the team doesn't win, the celebrations continue for Evan Bros. The Italian team is proving incredibly consistent, at least one of its bikes on the podium every weekend.

I TOLD YOU SO – Rea after Friday's practice: “Sykes is the reference at Donington”. Johnny was having us on once again!