The Marquez surname appears to derive from old Germanic name Marcües which seems to mean 'rider who wins at the Sachsenring with just one hand, the other tied behind his back while he solves a sudoku’. While some remain skeptical about this etymology, recent tests have confirmed it. Other riders used as guinea pigs during the tests can only agree.

On a day in which motorcycling linguistics took giant steps forward, others took steps back. The Ducatis appear to be caught up in a derby of their own, while Valetino continues to battle with his M1. Rins and Quartararo mistook the run-off areas for the beach and got their holidays off to an early start.

Some are in need of the break, others less so. 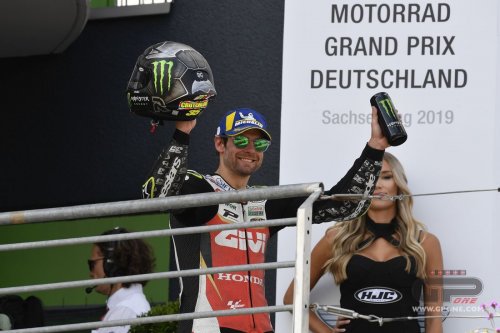 THE GOOD– Rather than a team, LCR looked more like an infirmary at the Sachsenring, but it turns out that leaving their crutches aside and gritting their teeth was the best cure for Crutchlow and Nakagami. Hats off to the pair, who overcame the pain with a good dose of race adrenaline, Cal reaching the podium and Takaaki also deserving of a mention.

THE UGLY – ‘MotoE is the future' - a phrase that says nothing if not how remote this possibility is. For now it's an interesting experiment but one that was squashed into an already full race weekend. The riders complete few laps and the tracks are not suited to bikes of this weight (or vice versa). You have to start somewhere but the initial impression is that the formula needs some fine tuning.

THE BAD – Up until a few months ago, it looked like the red bike was everyone's first choice, not it seems out of fashion. The Ducati may not have been the perfect bike over the last two years but it seems hard to believe that it's gone from being a thoroughbred to a nag in such as short space of time. Dovizioso says he can't even think about battling with Marquez. But then Lorenzo says the same and he's riding the Honda.

THE DISAPPOINTMENT– Fighting the bike, rather than his rivals. We don't often see Valentino Rossi riding like this, but it's hard to find anything good about his race in Germany. The Doctor is sure he can get himself out of trouble and the vacation is no doubt set to do him some good. Certain races are best forgotten.

THE CONFIRMATION – Apologies for being repetitive but it's hard to avoid talking about Marquez. Whether Marc or Alex, you decide. The order of the names might change but the result remains the same, the new theorem of motorcycle racing put into  practice by the two Spanish brothers. Holidays are always nice, especially when you're championship leader.

THE MISTAKE– He crashed at Assen when he overdid it, and crashed at the Sachsenring perhaps out of boredom. Alex Rins ends two races that could have resulted in a podium in the worst possible way.

THE SURPRISE  – Lorenzo Dalla Porta finally breaks the 2nd place curse. All it took was a good head and a srtong right wrist. We'd like to congratulate him but he's probably more interested in the fact he's leading the championship

THE PASS– A wanted person at the Sachsenring. We didn't see any, just some jousting a few kilometres behind Marquez. Seeing Marc ride is always spectacular but this time between one yawn and the next.

THE INTERESTING FACT–  Stefan Dörflinger enters the motorcycle Hall of Fame, What has changed since his day? “The professionalism of rider and how much they drink of an evening”, he replies.

I TOLD YOU SO – Saturday “the standings are more important than a win”. Sunday: “my strategy was to be out front from start to finish”. Marquez doesn't have a personality disorder, just good tactics. 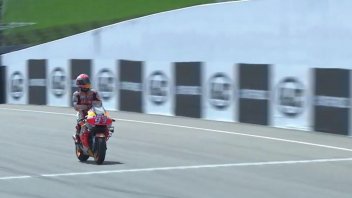 Marquez destroys his rivals at the Sachsenring, a perfect 10

In a video on You Tube, the driver defended his reasons but confirms the end of his experience with Audi in the Formula E
2 days 23 hours ago

It was decided by the Board of Directors via video conference call. Previously the FIM-Dorna contract provided for a minimum of 13 Grand Prix. In F.1...
4 days 16 hours ago

An embarrassing moment for Audi Formula E driver Daniel Abt who, during the virtual race in Berlin, had an eSports professional race in his place:...
5 days 10 hours ago

Rainey: "With the way things are in California right now, there is no way we can race with spectators at Laguna Seca in July ". The series is set to...
1 week 19 hours ago