It was a golden opportunity and he didn't let it go to waste. Johnny Rea aced the races at Donington, winning in race 1, the Superpole race and race 2. Hats off to the Cannibal then, who got away from pole today and found himself dealing with the Kawasaki of Toprak Razgatlioglu.

A copy of what happened two weeks ago at Misano, when the four-time champion and the Turk battled it out for the win. The final outcome was also the same, the Cannibal getting the better of the young Puccetti rider. The Northern Irishman couldn't have wished for more, rounding out a dream weekend. With three out of three, Rea moves into the championship lead, 24 points ahead of Alvaro Bautista on the Ducati.

And to think that prior to Misano, the Cannibal was trailing 41 points behind! The championship has now been quite literally turned on its head, the Aruba rider left to defend himself, a third place finish not enough to limit the damage. Donington leaves a bitter taste for #19 then, even more so for Chaz Davies, who couldn't do better than ninth, ahead of the Yamaha of Marco Melandri.

In race 2 there was one R1 that dreamed of the podium though, the Yamaha of Alex Lowes to be precise. The Pata rider was forced to settle for fourth place, ahead of the Kawasaki of Leon Haslam, who was fighting for the podium until the mid-race point. It was sixth for a very strong Loris Baz, who more than makes up for his early June debut at Jerez. The Frenchman kept Tom Sykes' BMW firmly behind him, the Brit having started from tenth, while Michael van der Mark finished eighth. Having had surgery on his fractured wrist just two weeks ago, the Dutchman gritted his teeth in race 2 to score a top ten result. 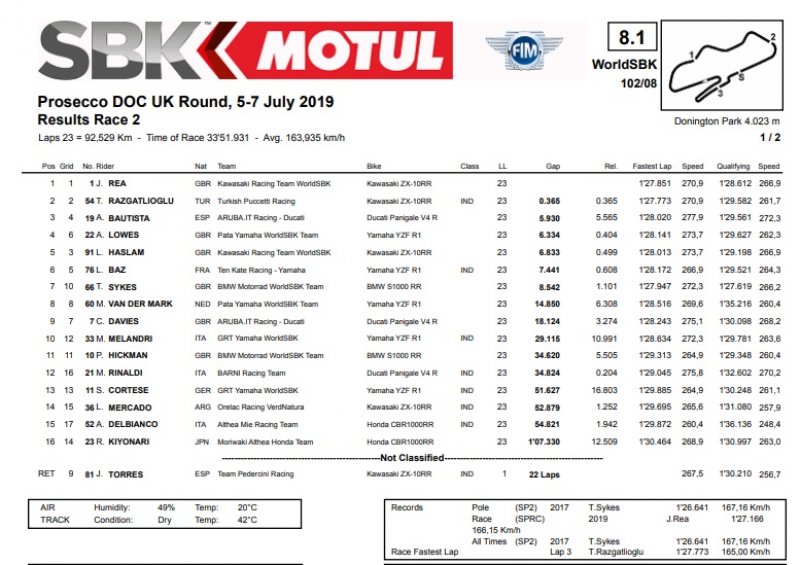 The Californian Yamaha rider took the flag alone ahead of teammate Gagne and Herrin, who beat the Ducati rider in a photo finish. Elias crashed out...
22 hours 51 min ago

Defending champion wins ahead of Scholtz and Gagne. 5th and 7th, Wyman's and Jacobsen's two best Ducatis. Elias stopped by a problem.
1 day 14 hours ago

The reigning champion started has started 2020 in the best possible way, heading his teammate Jake Gagne. Race 1 at 22:00 on Eurosport
2 days 12 hours ago

In a video on You Tube, the driver defended his reasons but confirms the end of his experience with Audi in the Formula E
5 days 22 hours ago

It was decided by the Board of Directors via video conference call. Previously the FIM-Dorna contract provided for a minimum of 13 Grand Prix. In F.1...
1 week 15 hours ago